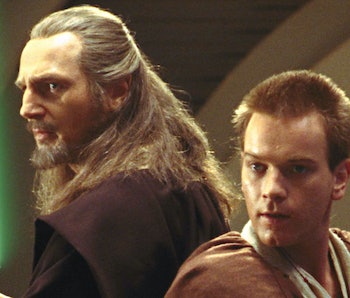 The Jedi dogma is bringing everybody down. From sad Luke in The Last Jedi and mean Luke in The Book of Boba Fett to Ahsoka getting bullied in The Clone Wars and the utterly preventable tragedy of Anakin Skywalker, the ways of the Jedi are often as oppressive as they are peaceful. Specifically, the notion that Jedi have to forsake emotional “attachment” to others seems to lead to all sorts of anguish, leading people to the Dark Side of the Force.

But suddenly, there’s a new hope that the Force is changing. According to journalist Joanna Robinson — who has worked for Vanity Fair and The Ringer — there are “whispers” at Lucasfilm that a new kind of Jedi may emerge in a post-sequel movie trilogy.

Speaking on The Ringer-Verse podcast, Robinson said she thinks the post-sequels films will specifically address this idea and that going forward, we’ll see a revamped Jedi Order. This rumor also suggests the Jedi might finally ditch one of their most annoying rules ever. Possible spoilers ahead.

The curse of the prequel Jedi

In the Star Wars prequel trilogy, we learned that Anakin Skywalker’s fall to the Dark Side of the Force was somewhat explicable. Before the prequels, we had no idea that the rules of being a Jedi prevented its members from having families or strong emotional bonds with other people. In this way, the laws of the prequel Jedi painted these noble warriors closer to priests than knights.

Therefore, Anakin’s love for Padmé Amidala became a forbidden love, eventually sending Anakin looking for answers outside of the Jedi. In his fateful duel with Obi-Wan, Anakin says, “From my point of view, the Jedi are evil.” In terms of the Jedi’s unrealistic and prudish expectations of people, you can kind of see what he meant.

Most Star Wars fans tend to forget that all of these rules were retroactive. Before 1999, we had no reason to think that Darth Vader decided to turn against the Jedi for somewhat reasonable ideological differences. In A New Hope, Obi-Wan told Luke that his Vader was “seduced” by the Dark Side, but in truth, Anakin simply wanted to be able to admit he had a wife and wanted to be a father.

In The Last Jedi, Luke refers to the hubris of this era’s Jedi, believing they shouldered the blame for the fall of the Republic. It’s also clear that Luke’s reading of history is also the intended interpretation that George Lucas wants us to have when watching the prequels. In the classic trilogy, the Jedi were beacons of hope and magic. But in the prequels, we learned they were part of the problem.

With few exceptions, the on-screen Jedi of the Star Wars TV series and films have continued the prequel’s “no attachment” rule. In The Mandalorian and The Book of Boba Fett, Luke is still thinking about the rules exactly as the Jedi who taught his father. He presents Grogu with an unfair choice, which results in Grogu embracing not the Dark Side but his surrogate father, Mando.

On some level, Grogu’s choice let Luke off the hook. Nothing terrible came of Luke teaching these extreme and unfair values to poor Grogu, and instead, it seems Baby Yoda spared himself the pain of undergoing Jedi training.

So, will this cycle ever end? In Colin Trevorrow’s unused screenplay for Episode IX — “Duel of the Fates” — Rey would have faced a similar problem. In that unused story, Rey fell in love with Poe but avoided a true romance because of the old Jedi “no attachment” rule. Leia would have talked Rey out of this way of thinking, suggesting that the Jedi need to revise their entire philosophy. Obviously, this movie was never made, but it aligns with the rumored new direction a Star Wars movie trilogy might take.

But which movie would we see that in? Right now, the Taika Waititi-directed feature film is the most likely project to potentially tackle something like this. However, there are also indications that Waititi’s Star Wars film could be an uber-prequel, taking place in the “Dawn of the Jedi” time period. At this point, the release date for that film is also very unclear.

As far as the rumored post-sequel trilogy goes, Robinson also added, “you can fill an entire stadium with ideas Lucasfilm has been interested in but never realized.” While this particular idea for a Star Wars project could reverse the “no attachment” Jedi rule, we should all take Obi-Wan’s advice and maybe not deal in absolutes.