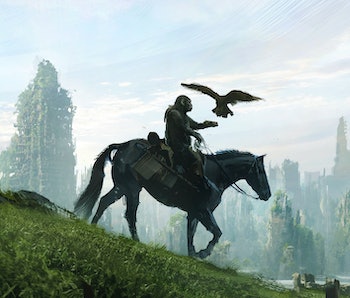 My kingdom for an ape! When Rise of the Planet of the Apes hit in 2011, longtime Apes fans assumed (correctly) that this was a remake, a reboot, and (kind of) a prequel to the original film. And, yet, as the series went on, it was possible to squint and see a possible version in which the continuities of the two film series could maybe — just maybe — be reconciled.

Now, with the announcement of a fourth film in the contemporary Apes series — Kingdom of the Planet of the Apes — there’s a possibility again that the newer movies could actually address the timeline of the old movies. Speculation ahead.

Is Kingdom of the Planet of the Apes a sequel?

Scheduled for theatrical release in 2024, Kingdom of the Planet of the Apes is a soft sequel to War for the Planet of the Apes. That film, released in 2017, was set sometime in the mid-to-late 2020s, after a virus wipes out a huge portion of humans, and apes take over. In War, Ape leader Caesar (Andy Sirkis) dies, which seems to conclude that story. However, Kingdom is being billed as an “all-new chapter” that picks up “many years” after the events of War.

So, yes, Kingdom of the Planet of the Apes is technically set in the same continuity as the other three Apes reboot movies, however, it’s not yet clear how many years into the future this installment will take us.

In the original five films, here’s how the timeline shakes out.

End of the Apes franchise, right? Wrong! Because, in the third film, Escape from the Planet of the Apes (1971), apes Zira (Kim Hunter) and Cornelius (Roddy McDowall) travel back in time from roughly 3979 to 1973. This seems to set in motion a pre-destination paradox in which their child, eventually named Caesar, begins the intelligent ape revolt in the fourth film, Conquest of the Planet of the Apes (1972), which is set in 1983.

However, the fifth film, Battle for the Planet of the Apes (1973), heavily implies that the time travel in the third film actually created a divergent timeline, which will result in a different future from the one we saw in the original Planet of the Apes film. Although much of the action of Battle takes place in roughly 2001, a framing of the story implies that, by the year 2670, intelligent apes and humans are living together peacefully.

So, the question is: of either of these two timelines, could the third timeline of the newer films be incorporated?

If we leave out the Tim Burton 2001 reboot and the original novel, Pierre Boulle’s La Planète des singes, we’re dealing with three Apes timelines: The first two from the classic films, and the current timeline that started with Rise. These timelines can’t easily be unified for two main reasons.

First, Caesar from the classic films is clearly a different Caesar from the newer films. His origin is different and his timeline is very different. Second, the way in which human beings get sick and die in the classic films is also different from what happens to us in the newer films. So, in terms of cause and effect, it seems impossible that these continuities could be united by the upcoming Kingdom of the Planet of the Apes.

And yet — because the newer films stopped in the 2020s and never even got close to 3978 (the first movie) or even 2670 (Battle), it feels like the new movie could spiritually bridge that gap. If Kingdom starts to visually look more like the future-Earth glimpsed by Taylor in the 1968 movie, then it could basically unite the settings and tones of the two series. Again, this wouldn’t be a literal bridging of the different Apes timelines, but if Kingdom edges into the 2600s or 3900s, it would suddenly be a lot closer to the feeling of the older films, even though the narrative is built on the backstory from the newer ones.

So far, the current Apes movies haven’t thrown any time travel into the mix, but if Kingdom did anything with that — well, then the Planet of the Apes canon could potentially have its own infinite crisis on infinite planets of the apes.

Kingdom of the Planet of the Apes hits theaters sometime in 2024.