“There were plans to make a video game at one point.” 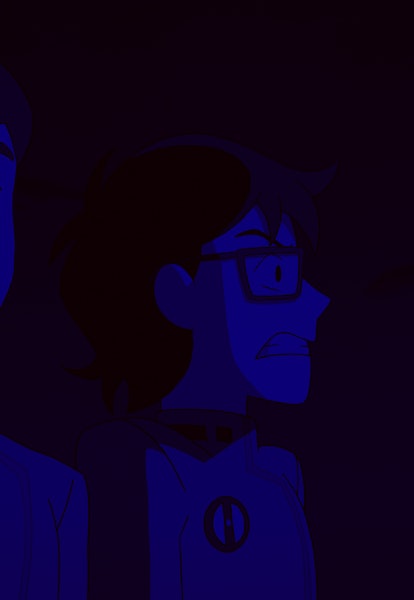 Infinity Train is a rarity in animation — a cartoon billed as an anthology series.

Each season focuses on a passenger that has been trapped on the mysterious train. To return to their lives, they have to undergo emotional growth. As a result, Infinity Train deals with heavier themes than you might expect from a kids’ cartoon, which made the series a cult hit with adults and children alike.

But that same iconoclastic storytelling has also been the Infinity Train’s downfall. After a series of executive-level decisions, the show made its seemingly final stop with the release of Infinity Train Book 4: Duet, which was released on HBO Max on April 15, 2021, though series creator Owen Dennis tells Inverse he had plans for future seasons, a movie, and even a video game.

“I really wanted to explore the Hazel and Amelia story,” Dennis says. “We knew exactly how it was going to end – it was bittersweet and beautiful. It would've happened in a few seasons.”

Dennis spoke with Inverse via email about unused ideas, what he tried to achieve with Infinity Train, and where he thinks the series could go from here. This interview has been edited for brevity and clarity.

Previous seasons were led by already established characters. Why did you choose to bring two wholly new characters aboard for Book 4?

When we first planned the show, we believed that each season would follow a completely new main character. After completing Season 1, we realized we really liked Lake. We were afraid that people who thought the show would indefinitely focus on Tulip would feel betrayed by a new character. Lake let us ease people into featuring new protagonists every season.

The first story is about Tulip, the next one is about someone directly connected to Tulip who shares her voice actor, and the third one is further disconnected from Tulip. By Season 4 and onward, we’re free to make books, new seasons, new movies, video games, etc that aren’t attached to Tulip at all.

People assumed Season 2 would feature more Tulip, but we subverted that with new main characters. In Season 3, people assumed there would be a redemption arc for everyone. In Season 4, there are a lot of expectations about the show’s tone. We’re hoping to subvert it again.

In every Book, the protagonist spends some time discovering what the numbers on their hand mean. Why is that important?

It’s the discovery of your problems. You can’t start therapy until you know you have a problem. The number is like that. It sparks the “I have a problem? No I don’t. Well maybe… No…” part of your brain.

What animation influenced you?

The Mysterious Stranger from the Adventures of Mark Twain is pretty influential. I really started getting into 2D animation during college. Until then, I had only seen 2D animation as something aimed at kids and I hated anime. In college, I realized 2D animation held so much potential.

Before that, I was really into 3D animation. It was new at the time, and I wanted to go into special effects.

Most of the animation that has impacted me has been animation for special effects purposes, meaning The Matrix, the stop motion in Star Wars, Starship Troopers, Jurassic Park, etc.

There’s an ongoing discussion about allowing adult animation to be more than comedy. How do you think the growing popularity of anime affects this?

Anime influenced kids in the ‘90s and ‘00s due to packaging like Toonami. Those kids are now in their 30s and making their own TV shows. They want to make stuff similar to what they watched when they were kids. Hence, you get shows like Steven Universe, Owl House, She-Ra, Kipo, OK K.O., Rise of the TMNT, etc. It’s clear that anime has influenced an entire generation of cartoon creators. Anime can be kid-oriented, but can also veer into adult themes.

As kids, many show creators were watching the adult stuff, so they’re trying to recreate what anime does in the American market. Unfortunately, the people in charge didn’t grow up with anime, so they often miss its value.

Overall, the fight has been a lot of pushing for emotionality in children’s shows, a lot of testing how “aged-up” you can make children’s cartoons. Meanwhile, Western adult animation is always branded as a comedy. We’re starting to see that change with heady and emotional shows like Bojack Horseman and Rick and Morty.

Unfortunately, there’s a big gap in the middle which assumes teens don’t watch animation, and that adults avoid non-comedic animation. However, it’s pretty clear that shows being made on both ends of the age spectrum are getting closer and closer to meeting in the middle.

We just need a couple of adult animated movies or TV shows to blow open the whole market. I’ve got stacks of treatments ready to go for that moment.

Can you share any ideas that you might’ve explored in later seasons?

It’d be interesting to see someone that has lived on the train for a year or so. When they return, their family is shocked to see them alive. What would that do to a person? That’s messed up enough to possibly get you sent back onto the Infinity Train, creating an endless loop!

I also really wanted to explore the Hazel and Amelia story. We knew exactly how it was going to end – it was bittersweet and beautiful. It would've happened in a few seasons.

“We also wrote a movie about Amelia’s rise to power.”

We also wrote a movie about Amelia’s rise to power, but they didn’t wanna greenlight it. It was about a grown woman grieving for her fiancé and not about a kid, so they thought kids wouldn’t like it.

I’m confident that teen and adult-oriented animation will be popular soon. Hopefully, someone will realize that’s what our show was targeting, so we can make the movie. We were also considering a season with an older Tulip that would’ve been really fun. But we would’ve likely been unable to get that greenlit for similar reasons

If Infinity Train were to continue, would you consider telling the story in another medium?

I’d love to! There were plans to make a video game at one point. We once had a VR Infinity Train experience where you hung out and solved puzzles in Corginia. Only like 10 people got to play it.

What did you learn from making Infinity Train?

A show is never going to be 100 percent what you think it should be. At most, it’s gonna be like 70 percent.

So many perspectives are pointed at your show that you (a showrunner) have to respect. Sometimes that means including ideas that you aren’t really into, but everyone else loves, so you let it in. Other times when I say something, everyone in the room will look at me like I’m insane and then say “That is a really bad idea” and then I just have to believe that the eight people, who I deeply trust are correct, so I shouldn’t do the idea.

If people want to support Infinity Train, what’s the best thing they can do right now?

Watch all the seasons of Infinity Train on HBO Max. If it’s not in your country yet, then do it legally when it arrives (and it will arrive). I’m trying to get a license to the show so I can make merch. If that happens, buy some merch! Companies respond to money, numbers, and personal emotions. You have to make numbers so undeniably big and audacious that they can’t deny you.

“Don’t be embarrassed about liking animation.”

If you like a particular toy or merch manufacturer, tell them you’d love to buy Infinity Train stuff. When enough people reach out, the company will contact Warner.

I also would say talk about the show freely. Don’t be embarrassed about liking animation. Talk about animation like you would any other show or movie. Include animated shows in your year-end top lists, don’t put animated shows in a separate list. When you talk to someone about shows you like, sprinkle animated shows into the conversations along with the live-action shows.

That’s how we move animation forward.