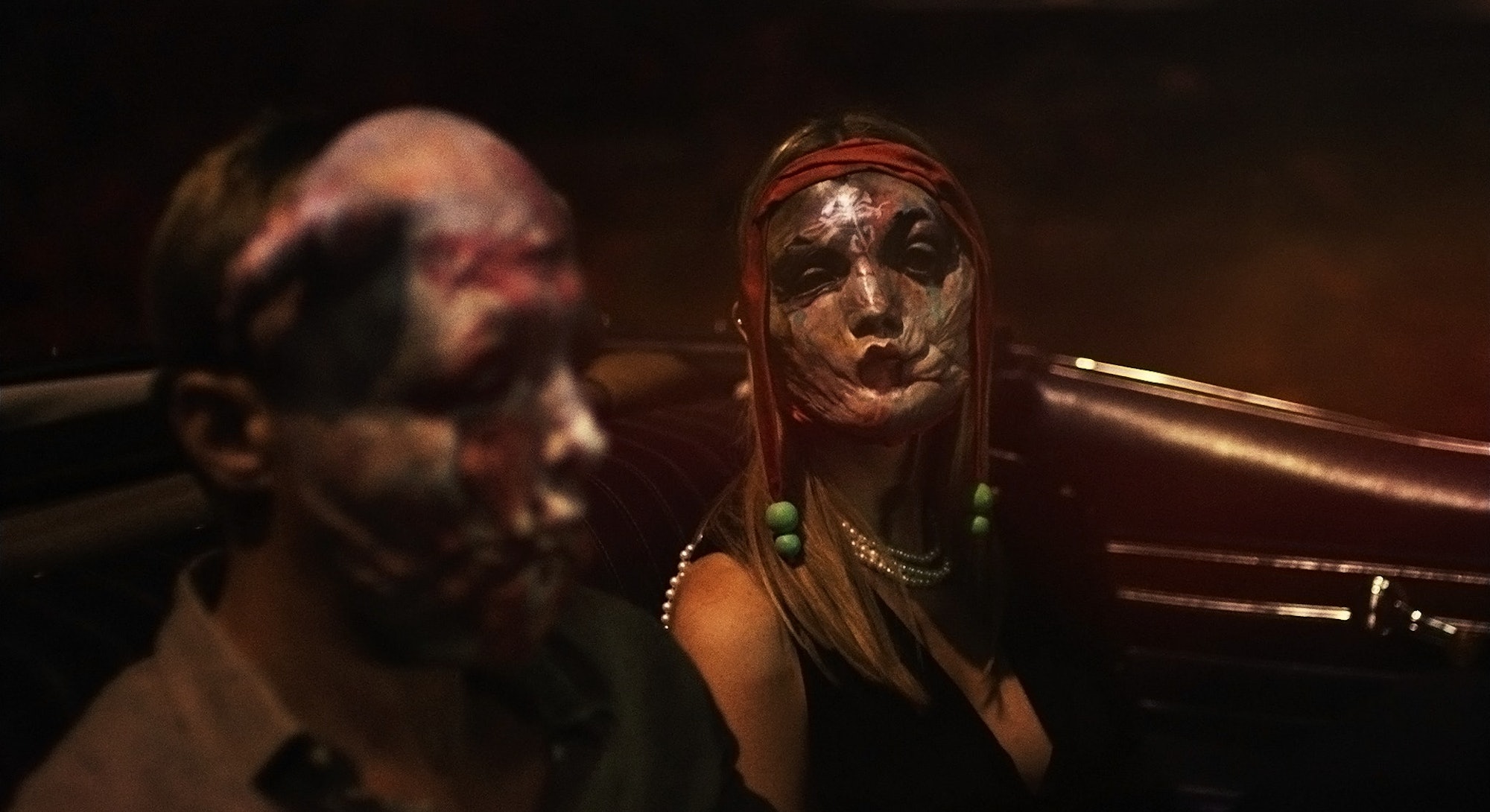 In Infinity Pool, Li Tolqa is paradise on Earth for the wealthy and depraved.

For a hefty price, foreign visitors to an opulent island resort in this impoverished nation can lounge by the beach, dance the night away beneath strobing lights, and indulge in every vice under the sun. They can even get away with murder — provided, of course, that they can afford the ultimate get-out-of-jail-free card.

Li Tolqa, you see, has a zero-tolerance policy on crime, and a rather warped sense of justice, given that all kinds of crimes carry the death penalty. Thanks to its local tourism initiative, there are two options for tourists who find themselves on the wrong side of the law: they can either face execution or pay to have identical doubles of themselves created and killed in their place.

At the center of the chaos is resort guest James (Alexander Skarsgärd), introduced while slowly stirring awake in one of the hotel’s lavish suites next to his wife Em (Cleopatra Coleman); she clues us immediately into the weirdness to come by asking James whether, in his sleep, he said to her, “You can’t feed yourself with white-sand brain death.”

He’s not sure if he said that, but it’s the kind of evocative, half-illogical musing one might expect to spill from the mouth of a failing novelist whose last book was titled The Variable Sheath. It was published six years ago, sold poorly, and fared even worse with critics; this remains a sore spot for the couple, and especially for James, given that Em’s father runs the publishing house that released the novel, but it’s far from their only point of contention.

Even at the Pa Qlqa Pearl Princess resort, where the pair have sojourned in hopes of inspiring James to start writing again, they address each other coldly and with disinterest; it’s clearly a relationship on the rocks and has been for some time. James soon encounters fellow vacationer Gaby (Mia Goth, last seen terrorizing audiences in Ti West’s retro-horror double-bill X and Pearl), who sizes him up with a hungry look and introduces herself as a fan of The Variable Sheath. As unlikely as this seems, James could use the ego boost and so goes to dinner with Gaby and Alban (Jalil Lespert), her rich architect husband.

Later, James and Em agree to follow Gabi and Alban outside the resort, past the barbed-wire fence and armed guards patrolling its perimeter, for a joyride in the Li Tolqa countryside. After wandering off to relieve himself leads to an encounter with Gaby, James stumbles back to the car in a daze and drives everyone back to the resort. But an accident on the way instead lands him under arrest for manslaughter. In the custody of local detective Thresh (Thomas Kretschmann), James is informed of Li Tolqa’s unique doubling procedure, a loophole that lets him off the hook so long as a double — to be molded to life in a chamber right there at the precinct — takes the fall instead. Naturally, James agrees.

Son of body-horror maestro David (who filmed Crimes of the Future in Greece as Infinity Pool shot in Croatia), Cronenberg visualizes the cloning procedure as a mind-melting deconstruction of self, reminiscent of the psychoplasmic warfare that dominated the latter half of Possessor. The director again partners with cinematographer Karim Hussain; together, the pair dream up all kinds of phantasmagoric imagery —viscous red liquid congealing around James’ neck, body parts forming and deforming as if made of putrid wax, neurons that glitter like disco balls — which recurs in later sequences to overwhelm the narrative in hot, frantic waves.

Intermingling erotic sensations with sinister ones until they’re wholly indistinguishable, these hallucinogenic sequences center on mutating violations of flesh: one bodily organ protruding from another, nipples that sprout uncontrollably, group sex in which participants’ bodies ooze across one another as if made molten by debauchery. Infinity Pool places its audience in a strange space, one that demands a certain degree of surrender to its unrelenting psychotronic excess as well as the existential despair that yawns beneath it like an abyss. The questions it asks are less class-conscious than psychologically invasive: freed from consequence, who among us can say for certain how we’d act, or what effects those actions would have on our ever-fluid senses of self?

For James, collusion with the criminality hidden inside Gaby and Alban’s life at Li Tolqa comes easily after the procedure. “It’s like a new skin working into place,” Gaby suggests, seductively, revealing that she and Alban ran afoul of the authorities and went through the process during a previous stay. Now that James is in the know, he can tag along with their other filthy-rich friends, running amok in Li Tolqa with the assurance that their hedonistic behavior will, at worst, result in a steep hit to their checkbooks.

The specifics of the doubling process are left slippery throughout Infinity Pool, and some of Gaby’s crew question its true nature. “I’ll never know if I’m really myself for as long as I live,” says one, a potent distillation of Cronenberg’s paranoid-schizoid preoccupations as a filmmaker. Once James samples a local psychotropic substance, though, Infinity Pool’s narrative grows even more topsy-turvy, lurching forward in a disoriented nightmare logic as Gaby sheds her adoring-fan guise to impose an impressively twisted power dynamic over the increasingly helpless James.

Skarsgärd is fascinating to watch as the opposite of his throat-ripping Viking from The Northman; always game for a cinematic endurance test, he takes more than he dishes out in this role, but the actor’s greatest gift is an intense physicality that makes James’ degradation into an animalistic state, and his accompanying psychological spiral, disturbing to watch. And Goth, never wilder, wrests control of Infinity Pool and never cedes it. As a near-parodically impulsive sociopath with a thirst for violence and humiliation, not to mention the most convincing cackle of any actress working, she’s operating in an arch, villainous register here that progressively breaks the film’s reality, but only to its benefit.

Infinity Pool reaches its hallucinogenic apex too far ahead of its final scenes, and it winds down a little too slowly, as if mirroring the groggy after-effects of a bad trip. But Cronenberg is smart to lace all the id-driven ultraviolence with a sense of humor black as oil slick. (After James completes the doubling procedure, for example, the detective passes him its ashes in an urn and suggests he take it home “as a souvenir.”) Cronenberg has picked familiar targets with Infinity Pool, but there’s a fresh, visceral pleasure to seeing them cracked open by a director this committed to carnal, cranial excavations.

Infinity Pool premiered at Sundance on January 21 and is available virtually through January 26, before opening in theaters January 27.