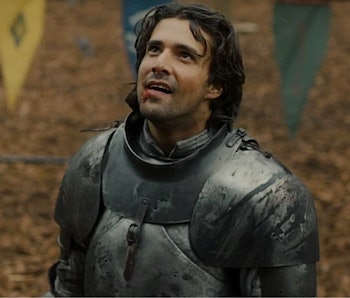 After watching Ser Criston Cole, a handsome knight (literally) in shining armor, win a tournament and the favor of Princess Rhaenyra Targaryen in the first episode of House of the Dragon, viewers may have been reminded of another character from Game of Thrones: Oberyn Martell.

Fans would be right to see the connection between Criston (Fabian Frankel) and Oberyn (Pedro Pascal). Both have olive skin and dark-brown waves, a distinctive accent, and are adept swordsmen — but, perhaps more importantly, Criston and Oberyn are also both of Dornish descent.

What does that mean, exactly, and are Criston and Oberyn related? Criston’s “family tree,” like most of the fictional lineages in George R.R. Martin’s A Song of Ice and Fire saga (and in real life), is a bit complicated...

Spoilers ahead for HBO’s House of the Dragon.

The Dornish connection— Ser Criston Cole was born to a steward of Lord Dondarrion at Blackhaven, in the Dornish Marches. His parentage is murky, but what we do know from the books is that, even though the peoples of the Dornish Marches were rivals of Dorne, Cole was of Dornish descent.

In Game of Thrones, Dorne is the birthplace of Prince Oberyn Martell and his paramour, Ellaria Sand (Indira Varma). Dornishmen are culturally and ethnically distinct from the rest of Westeros, as they largely descend from Rhoynar refugees, ancient peoples who fled the eastern continent of Essos under the guidance of warrior princess Nymeria (who may be getting her own GoT spinoff). Oberyn had eight illegitimate daughters known as the Sand Snakes, who were just as phenomenal as he was at both hand-to-hand and weapons combat.

Oberyn appears in Game of Thrones Season 4 as the representative of House Martell at King Joffrey Baratheon’s wedding to Margaery Tyrell. Oberyn secretly harbored a deep hatred for the Lannisters, as he believes Tywin Lannister ordered his sister to be murdered by way of Gregor Clegane (aka, The Mountain). There’s further tension between the Lannisters and the Martells, as the daughter of Cersei, Myrcella Baratheon, is in Dorne betrothed to a Martell prince. Joffrey is soon murdered on his wedding day by Lady Olenna Tyrell and Lord Petyr Baelish.

At first, Oberyn is appeased by the Lannisters when he is offered a seat on King Tommen Baratheon’s small council, but a trial-by-combat goes sour, and the charming prince is brutally murdered by The Mountain. Oberyn only lasts for one season in Game of Thrones, but he went down in GoT fandom history as being an iconic character.

Born again— We mentioned that Criston is born in Blackhaven, which is also the birthplace of Beric Dondarrion (Richard Dormer), a noble who was resurrected multiple times throughout Game of Thrones’ run. While it’s unclear if Criston is directly related to anyone in House Dondarrion, it certainly doesn’t hurt to be associated with such an iconic GoT character.

Beric Dondarrion was the head of House Dondarrion, an old house comprised of the great marcher lords of the Dornish Marches who swore fealty to House Baratheon of Storm’s End. Like Criston and Oberyn, Beric was a fantastic and fierce fighter, who was well-liked by his supporters because of his fearlessness and his charisma, as well as his more mythical power: he had been brought back from the dead no less than six times.

The Dondarrions were anti-Lannister. So much so, in fact, that Beric formed a guerilla resistance group known as the Brotherhood Without Banners. Initially, one of their first tasks was to apprehend Ser Gregor Clegane, and eventually they form an alliance with his brother, Sandor Clegane.

Beric is notable for being resurrected by a priest for the Lord of the Light, Thoros of Myrs. Each time Beric is brought back from the dead, he loses a chunk of his memory and also retains wounds. He is killed multiple times by Gregor and one time by Sandor. His final death occurs in the Battle of Winterfell, while protecting Arya Stark and Sandor from wights. He finally dies because his sole purpose, according to Lord of Light priestess Melisandre, was to save Arya so she could slay the Night King (and that she did).

Blood ties— While Criston may have loose ties to Oberyn and Beric, we cannot directly trace his lineage to any of the Game of Thrones ensemble. This is because, while dashing and endearing at the start of House of the Dragon’s book source material, Criston is (mostly) reverent of his Kingsguard oath, which means he cannot own land, marry, or father children. Cole eventually does fall in love and have intimate relations with a certain platinum-blonde Targaryen princess, but their tryst does not result in any daughters or sons.

In the Martin-penned prequel novels and novelettes, Cole dies in 130 AC during the civil war between Rhaenyra and Aegon II (also known as the Dance of the Dragons). His direct family line dies with him. Still, it may be worth visiting the GoT characters that share some of his cultural and ethnic roots, as Criston shares common traits with many of them.