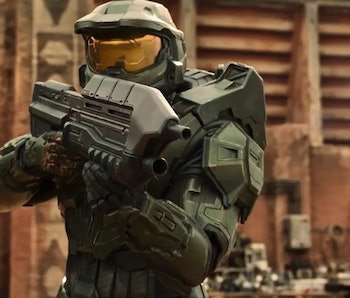 What story is Halo trying to tell? The first season of the video game adaptation is in the books, and while it made for a passable space opera, Halo couldn’t decide what it wanted to do. And so it attempted to do everything. Major spoilers for Halo Season 1 ahead.

There was Master Chief’s journey from loyal supersoldier to rogue operative to brooding badass. Then there were the Byzantine internal politics of United Nations Space Command, Dr. Halsey’s endless scheming, the misanthropic Makee’s time among the Covenant, a grieving Kwan Ha’s rebellion against a foppish tyrant with a penchant for quoting Milton, and the ex-Spartan Soren’s adventures as a pirate king — among many other elements.

It was a lot to take in, especially given how irrelevant several of the storylines felt in the face of the show’s broader stakes. And yet, despite its lack of focus, Halo shows promise and could turn things around in its second season.

A rocky Season 1 — Moving away from the game’s plot was not a bad decision — if nothing else, Paramount+ doesn’t have the budget for the nonstop action a more direct adaptation would necessitate. But the elements it chose to keep restricted the new additions. A fresh story had the potential to bring in both franchise fans and new converts, but by retaining John’s origins and the Halo’s purpose as the show’s central mysteries, anyone familiar with the games knew where this was going.

In particular, the Halo lurking in the background largely negated the Madrigal drama and Soren’s antics. It’s hard to get invested in the fate of one planet and one pirate when you know the future of the entire species is at stake. And if we already know where the mysterious artifacts are leading, we don’t need to see shot after shot of Pablo Schreiber grunting at them to get there.

You could feel the budget creaking too. Multiple alien planets were reduced to barren wastelands, giving Paramount+’s show the feel of old Doctor Who episodes where the heroes were forced to wander through various abandoned quarries. The season’s climactic battle felt weightless and looked like the tech demo for a graphics card.

Regardless, Halo was renewed back in February, with David Wiener — co-executive producer of Fear the Walking Dead and Homecoming — coming on as showrunner. Season 1’s critical reception was mixed, but there’s an opportunity to right the ship in Season 2.

Forward Unto Season 2 – For all its flaws, there were moments where Halo showed its potential. The aesthetics that make the franchise unique were lovingly recreated. Natascha McElhone made an excellent Dr. Halsey, Jen Taylor remains effective as Cortana, and Danny Sapani was also notable as a conflicted Captain Keyes. On Reach, you could feel the show’s big-budget shine as it showed us humanity’s future.

But Halo needs to wrap up some of its meandering plot points and resist the urge to add more.

You could see the thinking behind the Madrigal and Rubble stories. In theory, they gave us a glimpse of people being unhappy with the UNSC, an underexplored segment of Halo lore. And, despite the objections of pop culture revanchists in the fandom, the franchise needed to diversify both its story and cast. But in practice, these particular additions led to a lot of stumbling around.

Kwan Ha (Yerin Ha) felt especially superfluous. First established as a sidekick and moral compass for Master Chief, John then dumped her on Soren (Bokeem Woodbine) for an abortive attempt to rekindle her father’s rebellion. Then they killed the nefarious Vinsher off anyway so that Kwan Ha could go on a vision quest to establish a vague plot point. After making Kwan Ha the focus of the first two episodes, Halo abruptly shifted gears and shoved her aside, and despite Yerin Ha’s best efforts, it felt like the show grounded to a halt whenever it returned to her. If John stopped caring about Kwan Ha after Episode 2, why shouldn’t viewers?

At the risk of sounding literal, an entire episode of Halo shouldn’t go by without featuring the star of the show and the stakes his story revolves around. This is especially true when his development as a man struggling with doubt and conflicting loyalties felt rushed.

Again, it wasn’t the wrong decision to give Master Chief more of a personality. The walking gun of the video games was never going to work onscreen, and a good television adaptation isn’t created through slavish devotion to a story fans have already seen told in a different medium.

But an adaptation still needs to play to the strengths of its source material. And so far, those strengths — humanity’s desperate struggle for survival, Master Chief’s perseverance in the face of long odds, and the sheer wonder of witnessing alien weirdness — have been in short supply. Halo should tell a different story, but it still needs to be a Halo story, not an Expanse knockoff. If it doesn’t figure that out, its second season may be its last.

Halo is streaming on Paramount+.