Graham Skipper on 'Re-Animator: The Musical,' 'NHL 98,' and Hawaiian shirts

“I was always in Hawaiian shirts. I don’t know why.” 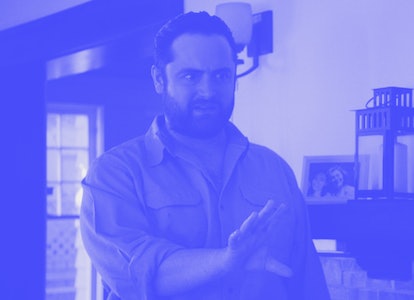 Yet the actor has made quite a name for himself in the genre over the past decade. His latest project Dementia: Part II, premiered via on-demand and digital on June 1. Funnily enough, it all started with musical theater.

“Getting cast, and being directed, by one of my heroes (Stuart Gordon) in a musical based on one of my favorite movies, and playing one of my favorite horror characters, was quite literally life-changing,” Skipper tells Inverse about his breakthrough role as Herbert West in Re-Animator: The Musical.

Melding his love of horror movies with musical theater set him on the path he’s on now — having starred in such indie genre darlings as 2013’s Almost Human and 2016’s Beyond the Gates, while writing and directing the 2017 sci-fi flick Sequence Break.

His latest is Dementia: Part II, which was created, financed, and shot during a five-week time span as part of Chicago’s first Cinepocalypse Film Festival back in 2017. In it, Skipper stars opposite Matt Mercer (who co-directs with Mike Testin) as Reggie, a profane, sleazeball of a parole officer looking after a man named Wendell (Mercer) who was recently released from prison. What starts as Wendell’s attempt at finding paid work, assisting with an elderly widow’s household chores, turns into a bonkers, gore-filled ride.

I was a super nerd. I loved video games. I love watching movies. I vastly preferred staying indoors to being outside. Pretty much every weekend, it was me and my group of six friends, and we would all get together and play whatever the best video game that we had available to us was. I think the biggest one was NHL 98.

What was your favorite band when you were 15-years-old?

It's not exactly a band, but definitely the album I probably listened to the most of was the Jekyll and Hyde soundtrack. Also, I was really into the Metallica S&M album.

So I was in Cub Scouts. I remember one day we were over one of the troop members’ house. He said, “Hey, my dad's got this new thing called Prodigy.” And we were like, “What's that?” And he said, “It’s crazy! You get on your computer and then you can talk to people anywhere in the world!” And we're like, “Really?!” And he’s like, “Yeah! You just get on and you can chat with people.” And we said, “Well, can we do that?” And then he said, “Yeah, let's get on!”

We tried to think of the furthest away place that we could possibly think of. And so we thought of Minnesota. And really, it was just us going, “Is anybody here from Minnesota?” I remember I went home and I was like, “Do you guys do have a Prodigy?” And pretty soon we had AOL in our house.

What is a truth about love you believed when you were 15?

This is turning into my favorite interview.

What high school teacher did you like the most? And why?

Probably Mr. League. Mr. League was an English teacher. He also taught a class that was all about Kurt Vonnegut. And then he taught a class that was all about Shakespeare. I just remember his teaching style. He treated us all as peers and never really talked down to us. He asked us questions and really knew the stuff that we wanted to hear about. Shout out to Cy League, wherever he is now.

What do you consider your first professional big break? And why?

It would be getting cast in Re-Animator: The Musical. I had been doing sketch comedy in a relatively successful troupe for about 10 years at that point. We had achieved some notoriety. Getting cast, and being directed, by one of my heroes (Stuart Gordon) in a musical based on one of my favorite movies, and playing one of my favorite horror characters, was quite literally life-changing.

That's how I met Joe Begos who cast me in Almost Human, my first actual movie. That's how I met the entire horror community. You know, working under Stuart was just so supremely rewarding and informative and I learned so much from him. Everything really changed after Re-Animator.

So that sketch comedy troupe that I was talking about? Our very first public show where we rented a theater, sold tickets, people bought tickets, and all that stuff ... we were not prepared at all. We were all 21 at the time, right? So we were very naive. We sort of thought, “Hey, we'll just do some crazy stuff, and people will find it funny.”

I will never forget: I was standing there watching this crowd of people come in that had each paid $20 bucks to see our show and thinking to myself, “We owe it to them to give them a good show. We're not going to.” We didn't rehearse and the show was terrible. One of our professors from college came to see it and I was just mortified. And he, of course, never came back.

It was just a realization of if you're putting on something that you're going to show to people, and especially that people are going to pay for you, you owe it to them to do your best job.

What is your cant-miss prediction for 2030? And why?

Wow. 2030. Nine years away. I think that we will have somebody on Mars by then.

That's something I've been looking forward to my entire life. I believe that whether it's somebody like NASA, whether it's some other country, or whether it's some private company, I think (and I hope) that the political division is going to begin to heal. I'm trying to be an optimist about all that. People are going to really be looking for something to rally around; that sort of the perfect thing to get everybody on board with. And Mars is fucking cool. So yeah, by 2030 I think we're going to have somebody on Mars. That's what I hope.

I think that my 15-year-old self would be pretty thrilled. He was a big nerd and wanted to do something in the Arts. At that time, I thought it was going to be Broadway shows or something in musical theater. But I think if he knew the path that I took to get here, with Dementia Part II out, playing the type of character I am, and the crazy shit that happens in that movie happens, I think he'd be over the moon.