“The hard part’s finding a reason.” 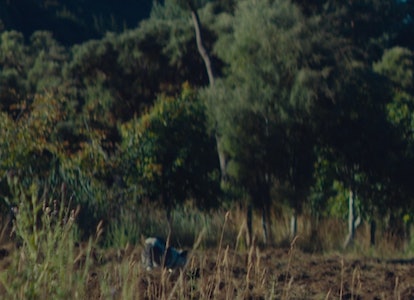 Even after the end of the world, three’s a crowd. That’s a simplistic way to look at the core theme of this post-apocalypse drama, streaming for free online right now.

Director Craig Zobel’s contemplative 2015 drama Z for Zachariah is a loose adaptation of Robert C. O’Brien’s 1974 novel of the same name, centering on three people who just might be the last three people left on the planet — at least for hundreds of miles around. In those circumstances, “three” suddenly becomes a pretty oppressive number.

O’Brien’s novel features only two central characters, who clash as they attempt to coexist in a peaceful valley somehow insulated from the fallout of a nuclear war. In the film, the conflicts are less violent and more philosophical, and Zobel and screenwriter Nissar Modi take a subdued approach that leaves a lot unspoken.

The changes from the book start with main character Ann Burden (Margot Robbie), who’s no longer a teenager, although she’s still fairly young and seemingly a bit naïve. Ann lives alone on her family’s farm, a verdant oasis away from the apparent horrors of the rest of the world. Aside from an opening sequence of Ann scavenging in an empty, dilapidated nearby town, the movie offers no glimpses of the world beyond the valley, only stories of harrowing experiences.

In many ways, Ann lives an idyllic life, insulated from danger and completely self-sufficient. She grows vegetables, raises chickens, fishes in a nearby pond, and hunts with her trusty dog Faro by her side.

But Ann is lonely, and she’s still haunted by the uncertainty of what happened to her father and her brother after they left to search for other survivors. She’s an avid reader, picking up books along with other necessary supplies on her trip into town.

She’s also a devout Christian, and the small chapel where her father used to preach sits just across the field from her house. When she discovers scientist John Loomis (Chiwetel Ejiofor) taking radiation readings in the valley, it might seem that her prayers have been answered.

Things are a little more complicated than that, though, and John’s presence is as disruptive as it is reassuring. He brings with him a sense of purpose and a depth of knowledge that complements Ann’s farming skills, and he gives her a renewed sense of hope for the future. But he can also be impatient and demanding, and he doesn’t share her faith or her convictions.

“We’ve been blessed with this valley,” she tells him. He’s certainly grateful for whatever anomaly has kept the area safe, at least.

When John first verifies the safety of his readings, he practically tears off his radiation-proof suit to breathe in the uncontaminated air. He’s so eager that he plunges into a pool at the base of a waterfall, and Ann has to reveal herself to him so she can warn him away from the radioactive water that originates from outside the valley.

“It’s just crazy this is still here,” he tells her, but his sense of the miraculous is rooted in science. He was part of the team that designed the protective suit he wears, and he’s eager to apply scientific principles to make the valley more livable.

In a bit of a blunt metaphor, the only way to get the wood to build the water wheel that can provide them with electricity is to demolish Ann’s father’s chapel, a literal battle between science and religion.

Ann gains an ally on the side of religion about halfway through the movie when she encounters Caleb (Chris Pine), a nomad who wanders into the valley and brings yet more disruption to Ann’s quiet home. He’s a believer, too, and he’s also closer to Ann’s age. The two of them look like they belong together, both good-looking all-American young people with vaguely twangy accents. There’s a mostly unmentioned racial dynamic at play as well, with the older Black man now feeling like an outsider on a farm with two white people who have a natural rapport.

Like all of the conflict in the movie, though, these tensions mainly exist under the surface, as the duo becomes a trio and John and Caleb throw themselves into the project of building the water wheel.

“The hard part’s finding a reason,” John says about rebuilding civilization, and for him, that reason is Ann, whom he comes to love. Increasingly, Ann feels the same way about him, and over time the movie reveals depths to her character beyond simple religious faith.

The story may at first appear to be about the incompatibility of science and religion, represented in the apparent incompatibility between Ann and John, but Zobel and Modi take a more sensitive (and more rewarding) approach, finding the levels of compromise and understanding that can arise from such contrasts. Likewise, John and Caleb aren’t just two brutish men competing over a helpless woman, even if they may make a “joking” bet over her at one point.

Tim Orr’s gorgeous cinematography bolsters that measured approach, with sweeping shots of the serene yet imposing natural landscape surrounding the characters. Heather McIntosh’s score is stately and often majestic, and the three central performances are introspective and layered. Robbie, just on the cusp of superstardom at the time, brings so much personality and range to a character who initially comes off as a one-dimensional farm girl.

“I lived through this, too, remember?” Ann protests to John at one point, after he uses his personal trauma as a shield, and all of her pain and resilience comes through in that one line. There’s no need to witness any apocalyptic violence when it’s all contained in the characters’ voices.

Z for Zachariah is streaming for free on Peacock in the U.S.

More like this
Entertainment
Jan. 31, 2023
Dune 2 Will Be Hilarious, Says Actor Whose Character Killed His Own Dad
By Ryan Britt
Culture
Feb. 2, 2023
After Harry Potter, Daniel Radcliffe Obviously Had to Play a Farting Corpse
By Alex Welch
Culture
Jan. 29, 2023
A 2011 Jake Gyllenhaal thriller reinvented the time travel movie
By Alex Welch
LEARN SOMETHING NEW EVERY DAY.
Related Tags
Share: