“All memories are traces of tears.” 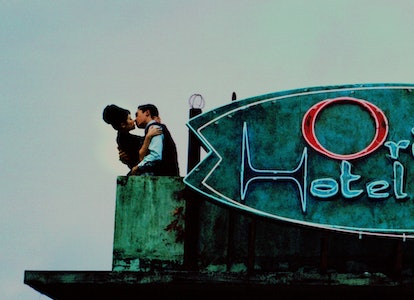 Even if you aren’t physically transported to another time, your mind and your emotions can travel somewhere else, into the past, experiencing events that have already occurred. The bittersweet feeling of romantic memory is something acclaimed director Wong Kar-wai captures beautifully in his films, all of which are filled with sensual longing and regret.

Wong is known for swooning romances, with his most famous films including In the Mood for Love and Chungking Express, and he’s not typically associated with science fiction. Even when Wong injects a sci-fi element into one of his movies, the story remains focused on romantic nostalgia.

Wong’s gorgeous, haunting sci-fi film 2046 is a sequel of sorts to In the Mood for Love. Following one of that film’s main characters, Chow Mo-wan (Tony Leung), as he pursues various doomed romances following his break-up with the married Su Li-zhen (Maggie Cheung, who appears briefly in opening flashback scenes), 2046 follows Chow’ through several romantic entanglements.

While In the Mood for Love focused on one love affair, 2046 finds Chow connecting with several women, never capturing the same purity of an elusive true romance that’s always just out of reach. Now that the film is available to stream free online via Tubi and Pluto TV, here’s why it’s a must for science-fiction fans in the mood for cinema.

Most of 2046 takes place, despite its title, in the 1960s, as Chow moves from Singapore to Hong Kong in part to escape the pain of ending his affair with Su Li-zhen. He works as a freelance writer, taking any job he can and living a playboy life, with women constantly coming and going from his room. Chow channels much of his romantic frustration into a sci-fi story that Wong periodically depicts with impressionistic flourishes.

The movie opens not with Chow but with Japanese businessman Tak (Takuya Kimura), traveling on a Snowpiercer-like train that constantly circumnavigates the globe. Even in this glistening high-tech future, Tak is a Wong Kar-wai character, so he too suffers from loneliness and existential ennui.

The number 2046 has multiple meanings: it’s both the time period of the future story, and a mythical realm where people go to recapture their lost loves. At least, that’s what’s supposed to happen there, although no one knows for sure, since Tak is the only person ever to have returned from 2046. “All memories are traces of tears,” reads the title card that follows the opening sequence, and traveling to 2046 seems like a melancholy experience at best.

For Chow, writing the sci-fi story of 2046 is a way to process his feelings for Su Li-zhen and to escape from the frustrations of his dalliances with women in Hong Kong. Outside of the story Chow’s writing, 2046 is also the number of the hotel room where Chow and Su Li-zhen carried on their affair, and it’s coincidentally the number of the hotel room where Lulu (Carina Lau) is living in Hong Kong. Chow is so taken with this coincidence that, following his brief encounter with Lulu, he requests to move into the same room she’s vacated. Instead, he ends up in 2047, while 2046 is occupied by a series of women he forms romantic connections with.

All those women end up reimagined as characters in the sci-fi world of 2046, as androids aboard the perpetually moving train, where Tak attempts to soothe his loneliness. Chow is endeavoring to do the same with the women he meets, although real people are more complex than android servants. The most significant occupant of room 2046 is Bai Ling (Zhang Ziyi), a prostitute who resists going to bed with Chow in any manner other than a transactional one. She extracts a nominal fee from him each time they sleep together, as a way to pretend they are just “borrowing” each other for company.

Chow’s connection with Bai is more volatile and carnal than his connection with Su Li-zhen, and he treats her spitefully at the end of their relationship, as if he can’t handle the prospect of a deeper bond. Maybe he’d rather be like Tak, finding companionship with androids. But even Tak eventually grows too close to his intimate partners, imploring one android to leave the train with him, though that’s strictly forbidden.

The android in question is portrayed by Faye Wong, who also plays another inhabitant of room 2046: Wang Jing-wen, daughter of Chow’s landlord. The actor who plays Tak in the movie’s opening scenes is also cast in a double role, playing a Japanese businessman with whom Wang Jing-wen is carrying on a forbidden affair. Like Chow, Wang Jing-wen is a writer, and her contributions help Chow find an ending for his sci-fi story (now retitled 2047) and resolve some of his romantic frustrations. Tak moves on from the realm of 2046, and Chow does the same, leaving his apartment and Hong Kong to return to Singapore, though he’s still plagued by missed romantic connections.

“It’s no good meeting the right person too soon or too late,” Chow says, but that’s all he ends up doing across years and multiple cities. The sci-fi of Wong Kar-wai is impressionistic and downbeat, more about feelings than technology or glimpses into a far-off future. Chow spends the entire movie engaged in his own brand of time travel, wistful for an era in which he felt the way he wishes he could feel in the present. His memories keep making traces of tears, and Wong beautifully captures every last drop.