“How many people did I kill?” 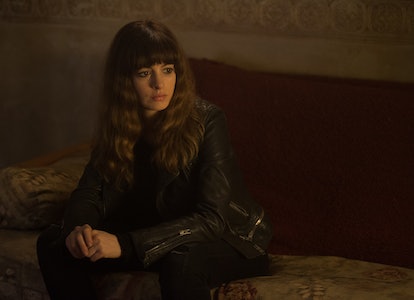 We all have monsters inside us. But those are metaphorical monsters, not giant beasts hundreds of feet tall that could demolish skyscrapers and swat away helicopters.

Gloria (Anne Hathaway), however, is dealing with both. She has an unacknowledged drinking problem and a self-destructive streak, which manifests in the ways she sabotages both her career and her relationship with exasperated boyfriend Tim (Dan Stevens).

But Gloria’s problems also manifest themselves in a literal monster, which appears halfway across the world in downtown Seoul, South Korea, wreaking havoc on a terrified populace.

Writer-director Nacho Vigalondo brilliantly and poignantly connects these two problems in his funny and insightful 2016 feature Colossal, a hidden gem now available to stream for free online. A mix of indie dramedy, kaiju sci-fi, and magical realism, Colossal is a unique and fascinating film about addiction, codependency, toxic masculinity, and cool monster fights.

Here’s how to watch it for free right now, and everything you need to know before you do.

After Gloria’s latest all-nighter, Tim to finally kick her out of their New York City apartment. So she returns broke and out of options to her small hometown of Maidenhead, New Jersey.

This isn’t one of those quirky early 2000s indie movies about an aimless 30-something rediscovering their purpose in life by returning to the town where they grew up. Gloria’s family is never seen onscreen, and they’ve left the house completely empty and covered in dust. She spends her first night back home sleeping on the hardwood floor with just her jacket as a pillow.

But the next day, Gloria runs into an old friend — or at least someone who positions himself as an old friend. The combination of disgust and resignation on Hathaway’s face tells you all you need to know about Oscar (Jason Sudeikis), who stops his pick-up truck in the middle of the street when he spots her, laboriously hauling an inflatable mattress back to her house.

The oblivious Gloria barely remembers Oscar at first, offering him surprised condolences on the death of his mother even though, as he points out, she attended the funeral. Sudeikis’ natural affability makes Oscar seem like a friendly small-town guy, while Gloria is the big-city cynic looking down on the rubes she left behind.

But the genius of Colossal is the way Vigalondo slowly subverts that impression of Oscar without ever letting Gloria off the hook for her own unhealthy behavior. Oscar now owns the local bar that his late father used to run, and he gives Gloria a seemingly generous job offer, which she takes despite her growing understanding that she has a serious drinking problem.

On her first visit to the bar, Oscar offers her a beer and she stares in horror at the bottle. Then she shrugs and downs it anyway, in an apt metaphor for the state of her life at the moment.

Up to that point, Gloria’s habits haven’t harmed anyone but herself, but when she stumbles drunkenly through a particular playground in a local park at a particular time in the morning, she somehow manifests as a massive Godzilla-like monster in Seoul, where her erratic movements have deadly consequences.

It doesn’t take long before Gloria recognizes her signature nervous tic in viral news footage of the monster’s hand movements and puts the pieces together, but by then, the damage has been done. “How many people did I kill?” she asks Oscar the next morning, in the manner that the average hungover person might ask if they said something irretrievably stupid.

It’s a stark illustration of the consequences of Gloria’s actions, and she seems to understand pretty quickly that she needs to set things right, if not in every aspect of her life then at least in the parts that might lead to the deaths of “a shitload of people.”

When Oscar inadvertently discovers that he, too, can appear in Seoul as a titan of sorts (in his case a giant robot), the dynamic takes on another dimension. The supposed nice guy who’s been showing cracks in his behavior since the moment he appeared onscreen suddenly has a new level of power he can assert. When Gloria doesn’t conform to his expectations for the big-city party girl, he moves from gaslighting her to making overt threats.

For a movie in which a giant monster and a giant robot battle while thousands of citizens flee, Colossal is remarkably nuanced.

Oscar doesn’t just make a sudden heel turn in the third act. He’s subtly undermining Gloria from the start, assessing this fragile woman as an easy target and resenting any expressions of autonomy. The same qualities that make Sudeikis so great at playing an actual nice guy on Ted Lasso make him just as great at playing a “nice guy” here, one who can barely mask his own insecurities.

“My life is just as amazing as yours now, for once,” he sneers to Gloria after he discovers his own ability to manifest as a deadly monster.

Colossal holds together remarkably well as a sci-fi story, even if the eventual explanation (via flashbacks to Gloria and Oscar’s elementary school days) doesn’t make much sense. But it works even better as a potent metaphor about the way that toxic masculinity can carry such dangerous threats in as little as a look or innuendo.

Hathaway shows the resolve and self-awareness that builds in Gloria, even if she remains a damaged person throughout the movie. “Right now, I’m more out of control than ever,” she tells her ex-boyfriend Tim at Colossal’s climax, but by understanding her own inner chaos, she’s able to harness the power that the manipulative men in her life have been determined to deny her all along.

Colossal is streaming for free on Kanopy in the U.S.