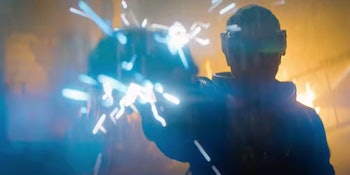 Predicting the future isn’t what it used to be. In Apple TV’s Foundation, the stakes are perhaps higher than any sci-fi TV series ever. It’s not just about the survival of the galaxy in the present tense, but how to save huge swaths of a galactic population over thousands of generations.

Season 2 of the groundbreaking sci-fi epic is coming in 2023, and the first trailer may hint at the revelation of a villain from the books. If this character appears in Foundation Season 2, the series could fix one of the wonkiest things about the famous Isaac Asimov novels.

Although the Season 2 trailer for Foundation doesn’t reveal much, we do get a sense that things across the galaxy are unraveling in a way that is much bigger than Season 1. Quick recap: In Season 1, Hari Seldon (Jared Harris) predicted a new dark age was coming to the Imperium. But, if given enough resources, he could mathematically help future generations reduce the amount of time the new dark ages lasted by several thousand years. Several twists and turns in Season 1 revealed there was more to Seldon’s plan than what he said outright. At the end of Season 1, his apprentice Gaal Dornick (Lou Llobell) finds herself thrust into the future, and face-to-face with her genetic daughter, Salvor Hardin (Leah Havey), the de facto leader of the First Foundation on the planet Terminus.

However, in the very first episode of Season 1, a voiceover from Gaal hints at her future knowledge of an enemy of the Foundation known as “the Mule.” In the Isaac Asimov books upon which Foundation is based, the Mule is a telepathic mutant who evades the mathematics of the future-reaching “Seldon Plan,” and becomes the person who causes the downfall of the First Foundation. We don’t see the Mule in Season 1, but it seems possible that Season 2 could reveal this villain — possibly the most pivotal character in the book series. In a few scenes in the trailer, we see one of the Cleon clones (Lee Pace, likely playing the now-adult Brother Day) doing battle with someone in goggles, wielding an energy weapon. Is this the Mule?

There’s also a monster in the trailer, which is interesting, too. In the books, the Mule can change his appearance, and initially, disguises himself as a clown. Is this monster also the Mule?

One of the biggest flaws of the Asimov Foundation novels is that they’re not really novels at all. The first two books — Foundation(1951) and Foundation and Empire (1952) — were actually published as various short stories long before the stories were retconned into a larger continuity. The earliest short story, “Foundation,” which would later become the basis for Foundation was actually published in 1942 in the magazine Astounding Science Fiction. Thanks to input from Astounding editor John Campbell, Asimov later retroactively created a continuity to subsequent Foundation stories, which provided the basis of the first two novels.

This practice was not unique nor uncommon in “classic” science fiction. Ray Bradbury’s two most famous novels — The Martian Chronicles and Fahrenheit 451 are also “fix-ups,” novels that were retroactively turned into a book-length stories, though originally published as separate short stories. (And, although Dune was mapped out by Frank Herbert more than Asimov planned out Foundation, that novel too, is technically a fix-up of eight interconnected short stories published in Analog from 1963-1965.)

The point is, Foundation the novel is much older than “Foundation” the idea, which means certain aspects of the big plot swings weren’t planned out in advance by Isaac Asimov at all. The Apple show has already made huge changes to the Asimov text, all in order to avoid the incongruous wonkiness a contemporary reader might encounter while reading the books for the first time. In 2021, Foundation showrunner David Goyer described the series as a “remix” of the Asimov books.

So, when it comes to the Mule — who could possibly appear in Season 2 — the potential here is for this to feel more organic. In the Asimov stories, the threat of the Mule comes out of nowhere. With a methodical and smart approach, the Apple series could make the revelation of this villain could feel less abrupt. Season 1 has already set up the Mule, in passing. But Season 2 could make the revelation and impact seem less retroactive.

In other words, if you find your head swimming while trying to piece together the chronology of the novels, know it’s not exactly your fault. The novels are confusing because they were written in a piecemeal, retroactive manner. But, when it comes to the possible Big Bad of Foundation Season 2, things will hopefully be crystal clear.