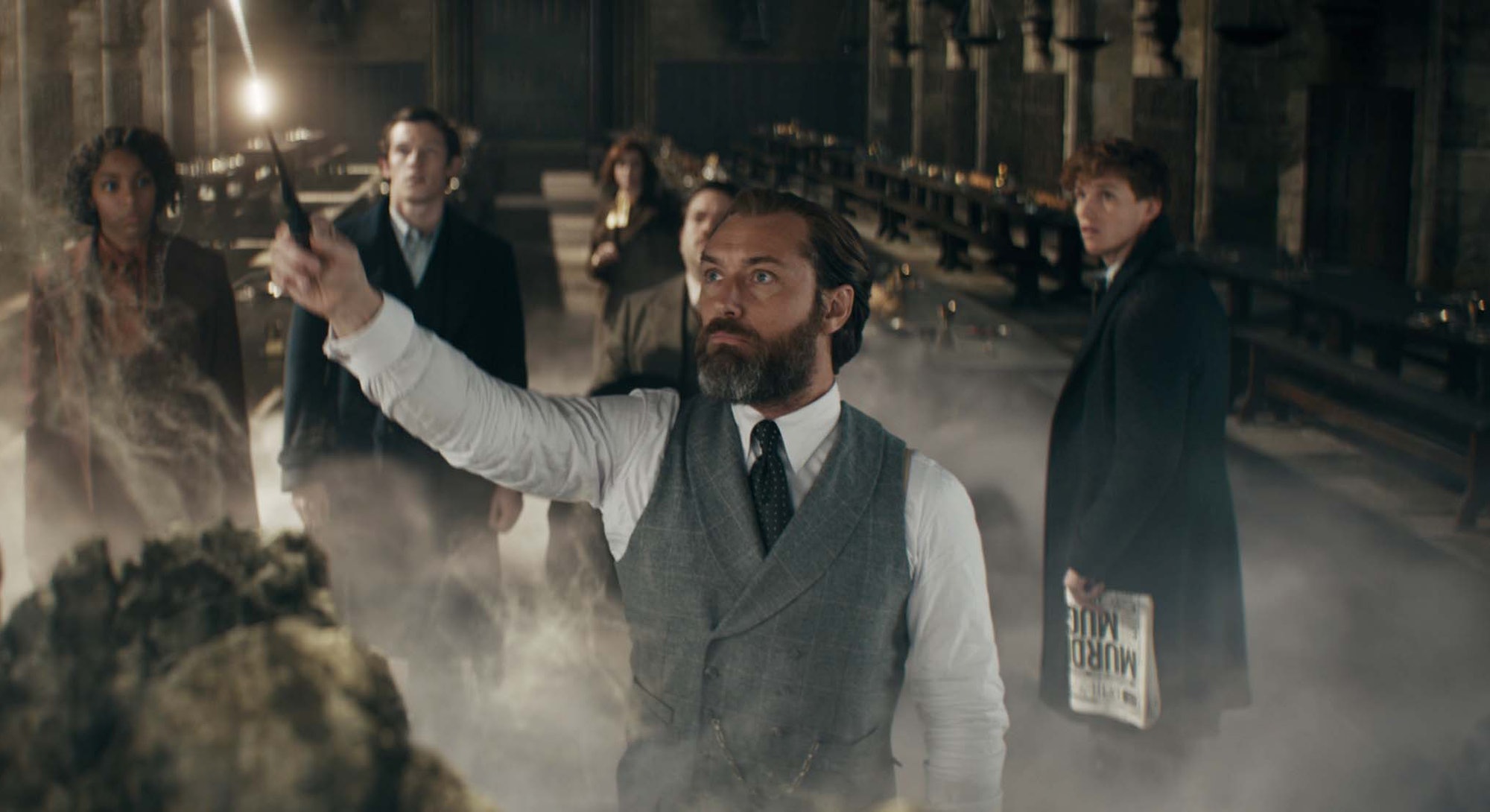 The Fantastic Beasts series stares down a couple of possible realities.

Thanks to the Crimes of Grindelwald’s misfiring, J.K. Rowling’s extra-acidic views, and Johnny Depp’s legal troubles, this franchise faces the very real risk of burning out long before completing its planned five-film arc. Whether Fantastic Beasts crumbles into ash or rises like a phoenix depends almost entirely on its third installment, The Secrets of Dumbledore.

Leave it to Albus to save the day (or at least make a valiant effort). While The Secrets of Dumbledore is miles from ideal, it at least clears the bar of not leaving a foul, confusing taste like its immediate predecessor.

A returning scribe revives the franchise

Among its infractions, Crimes of Grindelwald’s gravest was its failure to focus the story on the actual beasts. Instead, it dwelled on wizard melodrama, ending with villain Gellert Grindelwald’s (then Depp, now Mads Mikkelsen) shocking reveal that Credence Barebone (Ezra Miller) was a member of the Dumbledore family — the brother of Albus (Jude Law) and son of Aberforth (Richard Coyle), to be exact. That revelation failed to impress audiences, suggesting that Rowling’s role as sole screenwriter was dragging Fantastic Beasts down.

While the Harry Potter author took a backseat role in the original run of movies, she penned the first two Fantastic Beasts scripts on her own to little critical acclaim. Thankfully, Crimes of Grindelwald finds a solution by bringing in Steve Kloves, the scribe best known for working on every Harry Potter movie except Order of the Phoenix.

In just one film, Kloves, who is also the series’ co-producer, delivers the type of story the last two films failed to. In The Secrets of Dumbledore, the year is 1932 and it’s again time to pick the next leader of the wizarding world. With this being the best chance to realize the war he’s always wanted, Grindelwald looks to sway the election. It’s up to Dumbledore and his allies — members of an Army, if you will — to prevent that from happening.

Although there is still no answer to why the many fresh ideas in the phrase “fantastic beasts” are again shafted to spend more time at the well-trodden Hogwarts, “magizoologist” Newt (Eddie Redmayne) feels more present and alert now that he can be more than just a dorky member of the magical version of the World Wildlife Fund.

Order of the Phoenix REDUX

It’s evident that Kloves treats this film as his own take on Order of the Phoenix. The Secrets of Dumbledore is a way to fill that writerly void and the two installments share a few things in common. For one, they both feature a notorious villain at a specific moment in their career. Grindelwald’s influence is on the rise in the same way Lord Voldemort gained power in Order of the Phoenix. Fantastic Beasts 3 also harkens back to Dumbledore’s Army, with the Hogwarts professor assembling a small team of wizards and humans to face Grindelwald.

Despite the notion of this being Order of the Phoenix redux, there are some key differences. In a move that will prompt censors in certain markets, Dumbledore and Grindelwald are finally confirmed to be lovers in this new film, something that always remained as subtext in the main books.

Secrets of Dumbledore’s opening scene shows the two talking about a charmed pendant with their blood intertwined that stops them from ever mortally wounding the other. Aside from a few other lines of dialogue, that’s about as explicit as their out-of-the-blue relationship gets, so don’t be fooled by anyone who says this is a forward step for gay representation.

Fantastic Beasts learns to have fun

The palpable beauty of the creatures rendered by VFX supervisor Christian Manz and his team is one of the few exceptional aspects of the Fantastic Beasts franchise. Combined with the script’s placement of the beasts closer to the center of the narrative action, the creatures get to be more than just set pieces. It balances the drama of the mission, stirs up the pacing, and conjures a popcorn-level of joy that we haven’t seen from a Wizarding World movie in a long time.

Maybe the magic all along was to realize that Fantastic Beasts peaks at popcorn fun. It doesn’t need to rely on a deep familiarity with The Boy Who Lived or tell a story just as profound. Rather, having some lightness taps into a sense of playfulness that will let Newt and the wildlife shine in their own act, like the scene where he sashays with a legion of orange skrewts to escape a deadly place. It will also allow some eyes to once again overlook the brushes with exoticization when Asian elements are involved, such as the use of Bhutan as a scenic ornament at best during the climax.

Most importantly, however, opting to be a purely entertaining ride might just save this series. After three features, adding Kloves, nailing the beasts’ significance, and transforming Grindelwald into a compelling villain, Fantastic Beasts is seeing a way up. A positive sign, indeed, even if it might be too late for a franchise that has become untamable.

Fantastic Beasts: The Secrets of Dumbledore opens in theaters on April 15, 2022.