Elvira reveals why she sold her haunted house to Brad Pitt 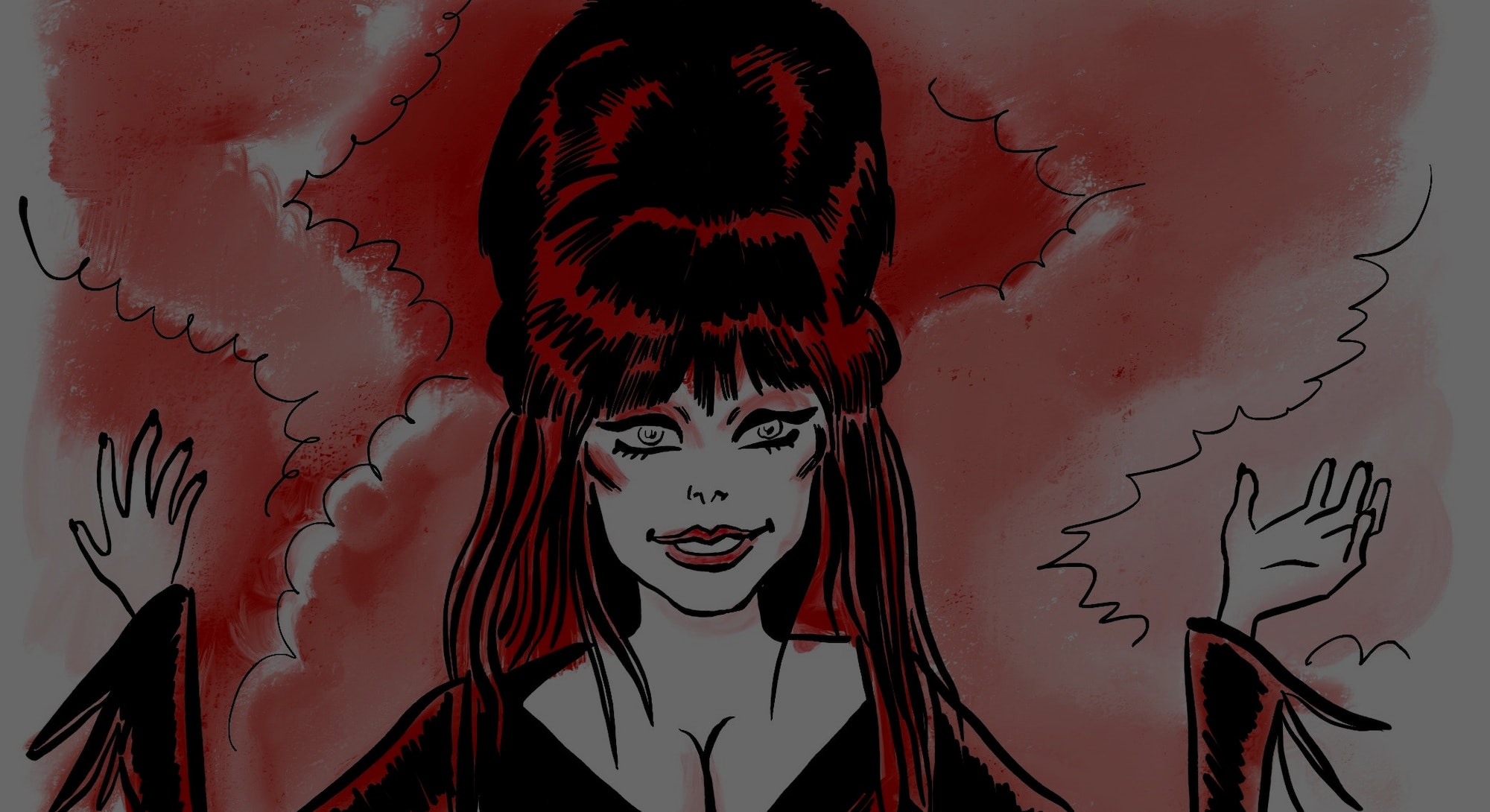 Cassandra Peterson has loved Halloween and horror movies nearly all her life.

That seems like a no-brainer since her alter-ego Elvira Mistress of the Dark has celebrated the spooky and scary for four decades. When you consider Elvira’s beginnings as a horror hostess on Public Access TV, that’s quite the accomplishment. All these years later, with horror specials on both Shudder and Netflix, she’s still having a scary good time.

“I bet I have spent more time in a coffin than anybody on Earth,” Peterson tells Inverse. “I can't tell you how many hours I've spent laying in coffins over my career, and laying on top of graves at a cemetery.”

Tapping into her wit, comedic sensibilities, and, of course, her striking good looks, Elvira became a pop culture icon who, throughout the ‘80s, appeared everywhere from TV shows to commercials, from live musical stage shows to Elvira: Mistress of the Dark, a late ‘80s big-budget movie that sent the larger-than-life character on a campy adventure on the big screen.

To promote the release of her highly-anticipated memoir Your’s Cruelly, Elvira, Peterson answered 13 questions about what scares her the most. From explaining her undying love of the original House on Haunted Hill to recounting the time she lived in a real-life haunted mansion, Cassandra steps out of Elvira’s shadow to get candid about her life, her passion for the horror genre, and the enduring icon of Elvira, Mistress of the Dark.

13. What’s your favorite scary movie and why?

I am going to go with House on Haunted Hill. The original. That is definitely my favorite go-to movie because it was the first horror movie I ever saw. Between second and third grade, my cousin took me, much to his chagrin after my parents found out. I was blown away.

12. What is your earliest memory of being afraid?

It was because of that movie. I saw that and I was absolutely terrified. But it's weird. I just wanted to go back and see more. It just completely scared me to death. I was expecting any of the things in the movie to happen at any moment.

11. Do you have a childhood nightmare you still remember?

When I came home from the movie, I had a recurring dream. It was the same dream, every single night after I saw House on Haunted Hill. My grandma and grandpa lived very close to me in identical twin houses. It was weird. They were up on a really high hill in these two little bungalows that looked identical. Every time I went there to visit them, I'd be afraid I would go to the wrong one.

“Out of the other door, came Vincent Price with a butcher knife.”

So, I kept having this same dream. I remember it so specifically. I would go up to my grandma and grandpa's house, knock on the door, and my grandma would come to the door carrying a giant butcher knife and start chasing me. Out of the other door, came Vincent Price with a butcher knife. And they both chased me all the way down the hill. I just remember running and running. And have you ever had a dream where your legs just don't seem to work and you're running in super slow motion? That's what was happening. It was just horrible. And I would wake up screaming every night. I had that dream over and over for months.

10. What is a local legend or ghost story from where you grew up?

Two teenagers were parked in their car making out at the Garden of the Gods, in Colorado Springs. That's where we all went to party at night when we were teenagers. So they're making out and then, pretty soon, the guy said to roll up the window because they heard on the radio that there was a man who was killing people in Garden of the Gods. And he had a hook for a hand. When they got home, there was a hook hanging from the window.

Everybody who told it started with, "This was real! It happened!" Or, "I knew the kid. He went to Palmer High School." It was like everybody knew this person that this happened to.

9. When was a time you successfully conquered a fear?

It's not so much about spiders or snakes, or anything like that. It's the fear of performing live in front of an audience. And that was finally conquered when I joined the Groundlings comedy improv group. I had to get out there every night and perform without knowing what I was going to say or do. I was fine dancing on stage and singing — I had no problem with that. But speaking in front of people was terrifying to me. I would almost throw up before I'd have to go out and say something to anybody. Even at a funeral, or something, I just couldn't do it.

After four and a half years in the Groundlings, I think I completely got over that fear. If you can get up in front of a crowd of people who have paid to see you, while not knowing what you're going to do, and they throw out a suggestion to you, you just have to try to be as on and funny as you can be and get through the night when you know you might crash and burn. Once you get over that, you're just kind of home-free, man. It was the best thing I have ever done.

8. Do you keep your feet uncovered when you sleep?

7. Have you ever seen a ghost?

I have a chapter in my book about this house I lived in called Briarcliff Manor. I mean, perfect, right? My ex-husband and I moved in and weird stuff started happening. I mean, first thing. I was unpacking boxes on the second floor. And I had told the movers to not take anything to the third floor because I didn't know what we were going to do. The third floor consisted of one big gigantic room, all surrounded by windows. This house was built in 1912, I believe.

“I sold that house to Brad Pitt.”

As time went on, more and more things kept happening. This included seeing ghosts two times very, very clearly. I was talking to the damn things like they were real people. And then they just kind of vanished before my eyes. Things went on and on there.

I got to the point where I said, I got to get out of here I can't deal with this anymore. We got a Native American Shaman to come in and save the house and clear it. And then just for good measure, we got a Catholic priest who came in and he did the whole little smoke pot thing they do and went all over to do an exorcism there. And from that day on, nothing ever happened again.

I sold that house to Brad Pitt. He still owns it and loves those stories. He was the only buyer that probably would have really gotten it for that, you know?

6. Which do you think are more likely to be real: Aliens or ghosts?

I'm going to go with ghosts. For sure.

5. As an adult, when are you most frightened?

I'd say when I have to do interviews like this one.

No, I'm kidding. I'm pretty much not that frightened about things. Maybe the news. Climate change. That might do it. I'm not really frightened of spooky things happening. It's kind of like an everyday thing for me, you know?

4. Are there any non-scary things that terrify you?

I mean, not really. I traveled with an assistant for years who was afraid of heights, and it was just kind of hell because we couldn't go up an escalator together. We couldn't get in a glass elevator if we stayed at a hotel. I kept begging her to do something about it because she just couldn't do any of those things because they would cause a lot of problems.

3. There is a killer in the house! What's your hiding place?

I have my hiding place all tricked out here. It's really a closet but I call it a safe room. I have my video monitor. I have a deadbolt on the door. It's a pretty sturdy brick door. It's got TVs. I can see all the cameras around my house. And it's got a shotgun. So don't come around and start trouble here at my house.

“Don't come around and start trouble here at my house.”

2. What has been your best Halloween costume?

That's an easy one. It's definitely Elvira because that is the only costume I've been able to wear for Halloween for 40 years now. It is really kind of a bummer because I grew up with my mom and my aunt owning a costume shop. And I always, for the first 30 years of my life, had the most awesome costumes. I was so into dressing up for Halloween. Once I got Elvira, it was the end of me wearing other costumes. It's a double-edged sword, you know?

1. Would you rather sleep in a haunted house or spend a night in a cemetery and why?