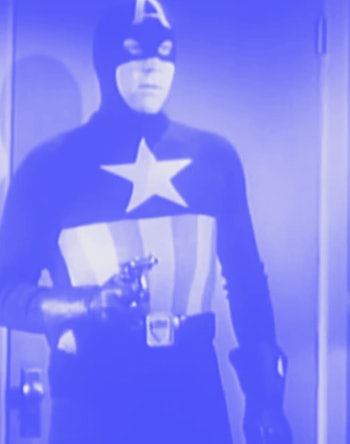 Captain America got the live-action treatment plenty of times before his Marvel Cinematic Debut in 2011 as the all-American hero fans know and love. But from Matt Salinger in 1990 to Reb Brown in the 70s, we didn’t get a truly memorable and impressive Captain America portrayal until Chris Evans came along and made Cap' a Marvel fan favorite.

Produced by Republic Features, a long-defunct studio that specialized in Westerns, Captain America (1944) was the first live-action Marvel adaptation to get a theatrical release. It didn't exactly kick off a trend though, and we wouldn't see another Marvel hero on the big screen until Spider-Man in 1974.

Hmm. I wonder what went wrong...

The first issue of Captain America was released in March of 1941, written by Jack Kirby and Joe Simon. This was smack in the middle of World War II, and therefore, entirely appropriate to make a comic about a guy wearing American flag gear and punching Hitler.

The Captain Ameria serial was released in February of 1944 while the war was still on, so it would seem to be the ideal time to show some patriotic propaganda to the civilians at home. And given the time the serial was released, you would think that Captain America would be in prime Nazi-punching mode. But oddly enough, this would turn out not to be the case (he does punch a lot of other people, though).

Once I started watching, I quickly realized how drastically and strangely the series deviates from the comics. Captain America isn’t Steve Rogers. Here, he's named Grant Gardner (as played by Dick Purcell) and he’s the district attorney for some unnamed city. It’s implied to be New York, but it’s never explicitly mentioned.

There’s no origin story for Captain America and no explanation as to how Gardner took on the role of a hero, it just jumps straight in. Sometimes it can be a welcome relief to not have to go through a familiar origin story all over again (i.e., Spider-Man: Homecoming), but because this is an entirely new character, it does raise a couple of questions about where he came from or how he got his powers.

Actually, there is no evidence that this Captain America even has superpowers. Sure, he has strong combat skills, but it's never stated that he’s been enhanced in unnatural wars — unlike the Cap from the comics and the MCU. There’s no mention of a super-soldier serum, so I’m just assuming that it doesn’t exist in this world. Basically, this Cap is more like Batman, only without the Batcave or billions and way more “America.”

Also, not only does this Captain America not appear to have any powers, but he doesn’t have his iconic shield which is rather disappointing. You know what he does have, though? A gun!

This might seem a little jarring, though, to be fair, Cap' does use a gun in 2011's Captain America: First Avenger. Still, at least in that movie he also had a dope shield.

Cap does get a motorcycle, at least.

And of course, Captain America does have his honorary rescuee/implied love interest/sidekick: his secretary, Gail Richards.

Yes, Gail Richards’s main role is to be the eye candy for Cap' to save, but I give this serial a lot of credit for giving her a more productive role (for the 1940s, anyway). Gail is the only person to whom Grant has revealed his identity as Captain America, and Gail uses her position as a D.A. secretary to help him investigate and bust bad guys.

Sure, she gets kidnapped a lot, but she’s no worse than Lois Lane in the early Superman TV show. Gail's actually better than Lois because she doesn’t spend the majority of her time swooning over the hero. She takes an active role in helping him against bad guys, and Cap' clearly shows some dependency on her.

Gail is a damsel in distress, but at least she does have more of a role beyond that of rescuee (even though you would never guess based on her appearances in the poster art). And that’s pretty impressive for a superhero show in the 1940s.

Unfortunately, the villain for this serial is definitely lackluster. I, for one, am greatly disappointed by the lack of Nazi-punching in this series. Or the presence of any Nazis for that matter. No, we don’t get to see the Nazis or the Red Skull, which, again, is surprising given when this was released. Sadly, Cap' only gets to fight this generic scientist guy and his goons.

This is Dr. Maldor, Captain America’s nemesis for the series. He has two villainous motivations: First, he’s pissed off at his former colleagues from an expedition because he feels they didn’t give him enough credit for his work and hogged all the fame for themselves. So, he invents a hypnotic drug to make all the former colleagues commit suicide.

I can’t say that this Captain America serial is the most engrossing story to watch, but it’s definitely a fascinating look at a very early Marvel on-screen depiction. I watched all of these episodes at once, and I admit, I found the series a bit tedious after a while. However, this was never intended to be binged like Netflix, but rather watched one episode per week. Remember those days?

As I said, you’re not going to want to binge all three hours of Captain America (1944), but I highly recommend checking it out if you want to see what's probably the earliest live-action Marvel story. It’s definitely a strange one, but it’s a compelling look at early Marvel history.

Rewind is an Inverse series that remembers the forgotten heroes we love.