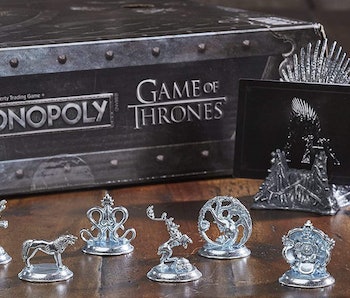 Board games are fun, but did you know that they might also be good for you, too? A study released in 2019 found that playing board games can help improve cognitive impairment and depression and help manage stress. Lucky for you, there are tons of fun but cheap board games on Amazon — and I rounded up a few of my favorites.

What's great about this collection is that it offers a little bit of something for everyone, and it gives you various options to choose from. You'll find some competitive games — like the Game of Thrones-inspired Monopoly board — and a few laid-back, trivia-based options. You'll also come across various games that feature modern spins on the classics, like Jumanji and The Game of Life.

And of course, you'll find that many of these games can be played by people of all ages — but there are some that definitely can't be. Take Drink-A-Palooza, for example. While it's meant for use with non-alcoholic beverages, it nods to various drinking games that require players to be at least 21 years old.

With that being said, here are some cheap board games that are guaranteed to turn your next gathering into a complete success.

The Chameleon board game is a quick (15-minute rounds) and fun game for all who play. The round starts with a secret word that everyone knows — except for the player with the game’s eponymous chameleon card. Each player then shouts out a related word to prove that they are not the chameleon while at the same time using those tidbits to decipher which player is the actual pretender. This one is recommended for three to eight players at a time, and it's suitable for people 14 years old and up.

2. A Hilarious Game Based On Memes

WHAT DO YOU MEME? Party Game
Amazon

If you're someone who sends memes to your family and friends on the reg, then you're probably going to love this party game. It basically requires you to compete against other players to create the funniest memes. In order to do it, you have to submit a caption card to coincide with a chosen photo card that's provided by the judge. Then, the player with the best caption — aka the one who creates the funniest meme — wins the round.

This game comes with a total of 360 caption cards and 75 photo cards, so you can definitely play for a while (or, as the box says, "until you're hungry" and want some pizza). Just keep in mind that this is an adults-only game that's recommended for players who are at least 17 years old.

3. Monopoly But For 'Game Of Thrones' Fans

Monopoly Game of Thrones Board Game for Adults
Amazon

A pop-culture twist on a classic game, this Game of Thrones-themed Monopoly board game offers hours of fun as you transport yourself to the fictional land of Westeros. Much like the traditional Monopoly game rules, you and your family and friends will be competing against one another while buying, selling, and trading property. But this time — instead of city houses and hotels — you’ll be dealing with the Seven Kingdoms’ holdfasts and castles. The game is fun for the whole family, as it stays in theme with the popular HBO series that it’s based on. It comes with six Monopoly game tokens that are inspired by the show’s Great Houses, and it features 42 gold dragons, 53 silver stags coins, as well as other locations that fans of the show will find familiar. For an added bit of nostalgia, there’s also a stand that, when pressed, plays the show’s widely recognizable theme song. This game requires two to six players.

Escape into the nostalgia of the ‘90s with this Jumanji board game. Simply roll the dice to find yourself amidst the jungle-filled utopia as you explore wild animals, and pull from a deck of secretly coded cards as the other players race to save you from ill-fated adventures. If someone can reach the center of the board before all of the doomsday spots are filled, they become the winner, yelling out “Jumanji” to end the fantasy. This game, which is a spin on the classic film of the same name, can be played with two to four players.

You don't have to be a know-it-all to win the Smartish trivia game. This game of strategy — which is recommended for ages 14 and up — allows you to steal and swap categories so you can take advantage of your strengths and finish up the game first. This set comes with a game board, four markers, 20 category tiles, eight steal tiles, four swap tiles, and 125 question cards. It also comes with a companion app that allows you to extend the game into the virtual world, and it can be played with up to 12 people.

6. A Game That Aims To Draw Out Your Dark Secrets

The Lie Detector Game uses actual voice technology to assess whether or not players are telling the truth. Throughout the competition, contestants take turns in the "hot seat" answering questions from other players who are trying to catch them in a lie. The person on the spot racks up points for telling the truth as they offer answers for the yes or no questions. Each response is spoken into a microphone which then deciphers through lights and sounds whether or not your answers are based on fact or fiction. It's recommended that two or more people over 16 years old play this one.

7. A Spy-Themed Word Game With Over 3,000 Glowing Amazon Reviews

This game requires top-notch clue-giving. Here's how it works: Various game cards are placed face-down in a square in between two teams. Those cards either have agents or innocent bystanders on the backs of them — but one card has the assassin. The front-facing sides of the cards show different words that are used throughout the game by the spymasters. Each team has a spymaster, and it's their job to give their teammates clues to uncover their agents that are hidden below the cards. The team who uncovers all of their assigned agents wins the game — but if someone accidentally uncovers the assassin, they automatically lose.

8. A Classic Strategy Game, But Now With Dragons

Prepare to take over the globe with this upgraded version of Risk, which includes a unique dragon token. Contestants of this board game strategize to build an army, and then they battle to take over one territory after another. Although the game involves a great deal of strategy, the dice dictate whether a player will defeat or be defeated as they move to eventually conquer the world. A great game for people 10 years old and up, it can be played by two to five players at a time.

Catan The Board Game
Amazon

The Catan board game is all about strategy. As a brand new settler on the rich land, you seek to cultivate and develop the isle by building roads and cities through trades, cards, or the dice as the threat of monopolies and robbers relentlessly looms to change your destiny. With so many moving pieces to consider, no two games of Catan are ever the same — which, undoubtedly, keeps players on their toes time after time (no matter how many times you’ve played). Catan can be enjoyed by multiple players, and it's the perfect activity for family and friends 10 years old and up.