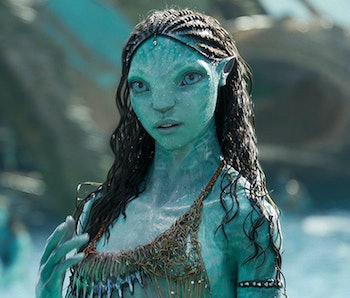 Paint me like one of James Cameron’s blue girls. The long-legged inhabitants of Pandora have some minor aesthetic differences in the color of their eyes and the shape of their tails depending on the biome they occupy, but there is one glaring constant: Every single Pandoran lady is sexualized.

There’s nothing inherently wrong with attractive aliens. From The Fifth Element’s Leelo to Futurama’s Leela, some of pop culture’s favorite space beings are bona fide hotties. And they aren’t all just cosmo chicks, either — see the fandoms surrounding Anakin Skywalker, Clark Kent, and Spock for proof. Creators understand that they sometimes need to give viewers someone to secretly (or not so secretly) pine for. Sexiness is part of the secret sauce to making an über-popular sci-fi franchise.

We can’t blame Avatar director James Cameron for following a tried-and-true formula with Neytiri (Zoe Saldaña) in the first film of his sprawling saga. Neytiri’s enormous, fluttery eyes, lithe and graceful limbs, and barely-there scraps of fabric were somewhat justifiable character design decisions. Neytiri seduces Jake Sully (Sam Worthington) with her heart, but her body plays a role too.

Still, when he falls for her, he also falls for the Na’vi way of life. Ultimately, Jake’s spiritual and physical relationship with Neytiri is what convinces him that Pandora and the Na’vi are more worthy of protecting than greedy human interests. Avatar’s romance was necessary to move the plot forward.

But viewers were promised that Avatar: The Way of Water, set about 14 years after the events of Avatar, would focus more on familial love, sacrifice, and drama — The Sopranos set in space, as Cameron coined the sequel. There was a lot of that in Avatar 2, but then there were the space teenagers the Sullys interact with on Awa’atlu, the Metkayina clan’s village above Pandora’s bioluminescent reefs.

Audiences are introduced to Tsireya, played by 19-year-old actor Bailey Bass, with a Baywatch shot from the POV of Jake’s son, Lo’ak (Britain Dalton). The Pandoran clan princess slowly rises from the water with an assortment of puka shell necklaces covering her chest, tosses her wet hair back, and giggles.

Looks aside, Tsireya could have been written as a more well-rounded character, rather than simply making her the object of Lo’ak’s fantasies. Instead, Tsireya — and Bass, who’s a force to be reckoned with in AMC’s Interview with the Vampire — is boiled down to aquamarine eye candy. She does get one meaningful monologue amid all the flirting, but by the end of the three-hour film, Lo’ak has developed a more emotionally resonant relationship with a whale than with his own crush.

In Cameron’s defense, it appears he tried to hit the cliché beats of most ‘90s coming-of-age rom-coms. Against all odds, the gawky, troublemaking outsider is able to pull the gorgeous and intimidating popular girl. The hormonally-charged relationship between Lo’ak and Tsireya was also more reminiscent of Romeo and Juliet than the slowly built-up relationship between Jake and Neytiri, which was all Dances with Wolves.

Still, Avatar and Avatar 2 mark two strikes. With the exception of Sigourney Weaver’s Dr. Grace Augustine and Kiri, both movies rely heavily on the male gaze to distinguish their female characters, giving them little more to offer than something nice to look at for certain audience members. Maybe it wouldn’t make much sense for Cameron to clothe his Pandorans in jeans and t-shirts, but surely someone on the planet is interested in wearing more than a loincloth.

Will Cameron be able to overcome Avatar’s worst sin for the franchise’s planned threequel? Now that the director has millions of fans hooked, it’s time for Avatar to stop using the “hot alien” trope as a crutch, and make better use of its female characters instead.

Avatar: The Way of Water is in theaters now.

More like this
Entertainment
Jan. 18, 2023
Avatar 3 just might fix the sci-fi saga’s biggest problem
By Eric Francisco
Culture
Jan. 16, 2023
Nearly 20 years later, a Will Smith sci-fi movie feels like a warning
By Eric Francisco
Entertainment
Jan. 23, 2023
The Pod Generation is soft sci-fi satire with too light a touch
By Isaac Feldberg
LEARN SOMETHING NEW EVERY DAY.
Related Tags
Share: