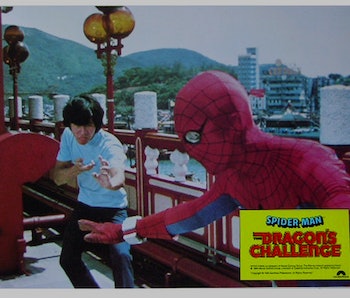 There’ve been a lot of Spider-Man movies over the years (like, a lot), but none more forgettable than the 1970s made-for-TV movies starring Nicholas Hammond. What began in 1977 with The Amazing Spider-Man launched a TV show and the follow-up 1978 movie Spider-Man Strikes Back. Both films featured equally boring villains, but in 1979, the series finally did something interesting with Spider-Man: It put him in a martial arts movie.

Spider-Man: The Dragon’s Challenge is the final TV movie and marks the end of the 1970s Spider-Man series. It premiered on television in 1979 and actually got a theatrical release in 1981. I’ve sat through two hilariously bad Spider-Man movies in the last two weeks, so I can’t wait to see what happens here. Especially since this new martial arts setting opens so many new possibilities. I only pray that I don’t have to see a reappearance of the last movie’s vanilla villain, Mr. White, the fiendishly evil entertainment mogul with a bikini fetish.

The movie kicks off in Hong Kong… exactly where you would expect a Spider-Man movie to take place? After a few cursory shots of 1970s Hong Kong, we come across this scene.

Oh boy, we’re jumping into uncomfortable racism early, aren’t we? I did not expect to see another old, white guy villain this soon, let alone one decked out in traditional Chinese garb.

This is Zeidler (again, no first name). He’s an industrialist who wants to build a steel plant, but there’s a pesky official who’s getting in his way.

I thought Mr. White was a bland villain, but he and Byron (the self-help guru from the first movie) are downright delightful compared to this guy. Zeidler is painfully boring. In fact, we barely even see him. He’s an industrial capitalist, so he has his paid goons to do all the dirty work. Spider-Man just fights a lot of his henchmen and goons. They only encounter each other in the last four minutes of the movie, and Spider-Man knocks Zeidler out in less than fifteen seconds. He’s arrested in the immediate next scene.

I can’t believe I’m saying this, but I wish Mr. White could’ve been brought back.

The Chinese official causing Zeidler problems is the Minister of Industrial Development named Min Lo Chan. He’s arriving in New York to visit his old college buddy, Jonah Jameson, but unfortunately, this is not entirely a social visit.

Min Lo is currently accused of spying and selling Mao’s secrets during World War II (thanks to Zeidler). He’s come to New York to find the men who can verify his innocence and needs Jameson’s help to locate them. Jameson puts Peter Parker on the case, for reasons.

Min Lo is also staying with his niece, Emily Chan, who has the part of Spider-Man’s honorary love interest in the movie. She doesn’t get kidnapped, though, just threatened by evil henchmen Close enough, I guess?

Hello there, Rosalind Chao! I did not expect to see you in this low-rent superhero movie. Chao is an excellent actress famous for her roles in notable shows and movies such as, MASH and The Joy Luck Club. She’ll also be in the upcoming live-action Mulan. She’s really too good to be here, but doing something like The Dragon’s Challenge is just one of the dues you have to pay as an actor starting out in your career.

Chao is doing her best with the crappy material she’s been given, but she and Hammond have no chemistry whatsoever. They spend most of the movie being pissed off or ignoring each other. Again, it’s not really anyone’s fault except the producers’ and the scriptwriters’.

Zeidler’s goons follow Min Lo to New York to bump him and Emily off in front of Peter. Peter escapes so Spider-Man can save the day, but during his fight with the goons, Min Lo conveniently has a heart attack. He doesn’t die, to the disappointment of the henchmen, but he’s in critical condition.

Yes, Spiderman is back, and he looks a little… different than he did in the previous movies.

He is now restricted to only one web-shooter that’s been welded onto his left wrist. It’s basically an ugly, clunky bracelet that looks like a reject from the Mr. T. collection. But at least it matches his new, gaudy utility belt!

Peter does manage to locate one of Min Lo’s contacts, an ex-Marine who agrees to testify in Hong Kong in his defense. So Peter, Emily, and the ex-Marine all go to Hong Kong together to clear Min Lo’s name while Min Lo stays behind to recover from his heart attack and surgery.

At one point, the ex-Marine gets kidnapped by Zeidler’s henchmen, and it’s up to Spider-Man to save him. During the fight, Spidey gets hit by a poisoned dart and Emily has to drag his sorry webbed ass to the doctor. The doctor yanks off his mask to reveal Spider-Man’s identity. Emily is shocked. The attending doctor could care less.

But really, should Emily be this surprised? At this point, it doesn’t seem possible that Peter can keep his identity a secret from anyone. There isn’t any logical way to prevent someone from linking the two of them as the same person. Yes, everyone in New York knows that Peter and Spider-Man are tight, but when Peter jets off to Hong Kong and suddenly Spider-Man conveniently shows up, too? Surely Spider-Man’s appearance in Hong Kong would make international news? You would think that anyone who doesn’t have the I.Q. of a stalk of broccoli would put two and two together.

Emily assures Peter that she will keep his secret. The doctor makes no such promise.

I have to say, out of all three of the 1970s Spider-Man TV movies, this one was the worst. It wasn’t outrageously over-the-top bad, but it was ungodly boring. You would think Spider-Man in a martial arts setting would promise some hilariously over-the-top action, but it’s so uninteresting. From the plot to the protagonists to the villain, it was just a slog to get through. This movie marked the end of the 1970s Spider-Man series, and it certainly went out on a weak note. Well, at least Nicholas Hammond could end his reign as Spider-Man with a slightly better haircut.

I can’t recommend you actually watch this movie, but here’s a handy compilation of some of the best bits.

Rewind is an Inverse series that remembers the forgotten heroes we love.