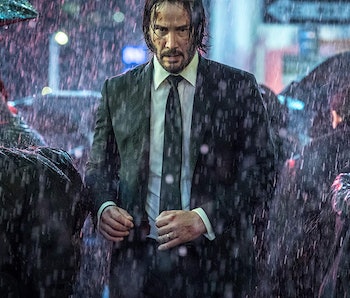 It looks like Keanu Reeves is back and ready to kick even more ass in John Wick 4. What began as a humble indie action flick with 2014’s John Wick, which followed an ex-hitman’s mission to take revenge on the Russian mobsters who killed his dog and stole his car, has morphed into a multi-million dollar franchise chock-full of action set pieces and a killer cast. The most recent installment, John Wick 3 - Parabellum, saw John duking it out with fellow assassins after he’s branded “Excommunicado” for killing a member of the High Table.

John Wick 4 may be a long way away, but we have tons of details to help us prepare for what’s coming. Here’s what we know.

When will John Wick 4 be released?

Variety said Lionsgate initially planned for John Wick: Chapter 4 to be released on May 21, 2021. However, the studio pushed back the release date to May 27, 2022. This is not only due to the delay in production from the coronavirus pandemic, but also Keanu Reeves’ commitments on the upcoming Matrix 4.

What is the official title of John Wick 4?

Right now, the current title of the fourth movie is John Wick: Chapter 4. The titles have eschewed any predictable pattern like, say, the Mission: Impossible franchise. Considering John Wick: Chapter 4 is reminiscent of the second movie’s title (John Wick: Chapter 2), it’s very possible the title could remain intact. But there’s the chance the John Wick team will have a creative change of heart and revamp the title closer to release.

Yes! Stahelski will be making a return for John Wick: Chapter 4. Stahelski is a longtime friend of Reeves, having worked as his stunt double, and helmed all three previous John Wick movies. Stahelski has been pivotal in shaping the look, feel, and pace of the John Wick world and story, so it’s tough to imagine a movie where he’s not in the driver’s seat.

Is there a John Wick 4 trailer?

There isn’t a trailer for John Wick 4 just yet. We’ll likely see the first teaser arrive in late 2021 and an official trailer closer to the May 2022 release date.

Which cast members will join Keanu Reeves in John Wick 4?

Laurence Fishburne has been confirmed to return for John Wick: Chapter 4, reprising his role as The Bowery King. A number of actors have also been announced to be appearing in undisclosed roles. The list includes Rina Sawayama (the film debut for the singer), Donnie Yen, Shamier Anderson, Bill Skarsgård, Hiroyuki Sanada, and Scott Adkins.

How did John Wick 3 - Parabellum end?

John Wick 3 - Parabellum ends with John facing down Winston and The Adjudicator (working on behalf of the High Table, which essentially governs killers worldwide). Winston was forced to lure John into a rooftop parley. Whether knowingly or not, Winston shoots John in the chest — good thing he was wearing his bullet-proof suit. Wick manages to survive the fall and walk away from the scene, and is secreted away by the Tick-Tock Man (Jason Mantzoukas) and the Bowery King (Lawrence Fishburne) to heal from his wounds and likely plot a little revenge.

What is the plot of John Wick 4?

We still don’t know the plot of John Wick 4. It’s very likely the movie will pick up immediately after the end of Parabellum, as previous sequels picked up one right after the other. It’s also likely John will be going after The Adjudicator, the High Table, and Winston in his quest for retribution.

What else do we know about John Wick 4?

Keanu Reeves is wasting no time at all getting back into the thick of it with his physical training. The week before Christmas 2019, the team at Taran Tactical posted a photo to the company’s Instagram featuring Reeves. Reeves trained with Taran Tactical for the earlier movies, too.

What do we know about the John Wick spin-offs in the works?

There are two spin-offs in the works right now, and it’s unclear whether they’ll directly tie into the main John Wick arc.

The first is The Continental, a Starz TV series. Lionsgate Television chairman Kevin Biggs announced that the series would center around a young Winston in the 1970s. It will incorporate real-life events, including the Great Garbage Strike and the American Mafia's rise to economic power. There’s not a release date at the moment, but the first season will include three 90-minute episodes.

There is also Ballerina, a movie spin-off based on revelations about John Wick’s past and his training, as seen in Parabellum. Ballerina will focus on a female killer trained by the same shadowy Eastern European organization which trained John. She’s also seeking revenge on those who killed her family. We still don’t have a release date for Ballerina, but it’s reported that the studio is possibly eyeing Chloë Grace Moretz as the type of actress to lead the film.

Will there be a John Wick 5?

You better believe it! In August 2020, Lionsgate announced that a fifth John Wick film was already in development. Initially, the film was intended to film right after Chapter 4. However, the studio has put that plan on ice due to the pandemic.