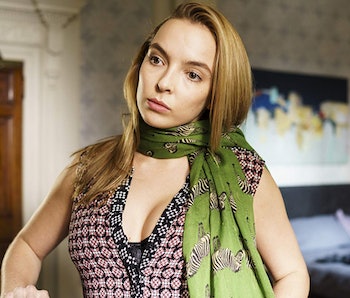 This article about Season 3 of the series Killing Eve was originally published on May 29, 2019 and updated on May 15, 2021 following the release of the season on BBC America. Read on for the original article, with some new changes to reflect the latest updates on this topic.

It seems like everyone and their mother is majorly into BBC America’s highly addictive spy thriller Killing Eve. From the thrill of a cat-and-mouse chase between MI6 agent Eve Polastri (Sandra Oh) and the impulsive, skilled assassin Villanelle (Jodie Comer) to the whip-smart dialogue to the thrilling action set-pieces across Europe, Killing Eve has consistently delivered over the course of two seasons.

The critically-acclaimed series ended its second season with a literal bang on Sunday, May 26, 2019, leaving fans on tenterhooks about what could possibly happen next for Eve, Villanelle, their allies, and their enemies. Season 2 saw the relationship between Eve and Villanelle grow more intense and complex as their attraction to one another continued to affect both their personal and professional lives. But what is next for these two as we go into the future? Could Villanelle’s betrayal of Eve spell doom for them both?

Here’s everything we know about Killing Eve Season 3, including the release date, cast, and big questions we need the show to answer.

When was the Killing Eve Season 3 premiere date?

How many episodes were in Killing Eve Season 3?

Season 3 had eight one-hour long episodes, just like Seasons 1 and 2.

Who is the new showrunner of Killing Eve Season 3?

Killing Eve was renewed for Season 3 back in April 2019, according to a report by Deadline. It was also noted in Deadline’s report that Season 3 would have a new show-runner in Suzanne Heathcote. Heathcote takes the reins from Season 2 show-runner Emerald Fennell, who previously took over for Season 1 creator and scribe Phoebe Waller-Bridge.

Suzanne Heathcote is a solid addition to the Killing Eve team. A British writer and actor living in the U.S., Heathcote’s career began in the theatre. She was part of the Young Writers Program and Advanced Writers Group at the revered Royal Court Theatre in London. Heathcote went on to write several plays, including Plot 10, Unspoken, Taken, So., I Saw My Neighbor on the Train, and I Didn’t Even Smile.

Heathcote’s biggest onscreen credit to date is working as a writer on Fear the Walking Dead. She is also credited with writing and acting, working on a few shorts, but it seems Killing Eve will be her biggest credit to date.

As previously mentioned, Heathcote will be taking over for Season 2 showrunner Emerald Fennell. Although no specific reason was given on why Fennell was departing, it seems like it’s part of an overall plan to allow each season to thrive under a new showrunner’s vision — as indicated in Sarah Barnett’s, President of Entertainment Networks for AMC Networks, statement on the show’s renewal.

“Phoebe Waller-Bridge and Emerald Fennell have delivered two addictively entertaining seasons. As we did last year, we’re renewing Killing Eve right out of the gate, now with Suzanne Heathcote as lead writer, as a sign of confidence – we adore this show as much as our fans do. Killing Eve doesn’t do anything in a templated way; we love giving [an] opportunity to three genius women to make their mark.”‘

Fennell commented on Heathcote taking the reins, stating, “It’s been such an exciting year for me on Killing Eve. I think it’s cool that this tradition has been built into this untraditional show. Inheriting some of Phoebe’s characters was a treat – I can’t wait to see what Suzanne does next.”

Waller-Bridge also weighed in on Heathcote’s hiring, saying, “I’m very excited that the Killing Eve baton is being passed onto another incredible writer for season 3. We can sleep soundly knowing these characters are safe in Suzanne Heathcote’s hilariously murderous hands.”

Which Killing Eve cast members came back for Season 3?

What was the plot of Killing Eve Season 3?

Killing Eve Season 3 picked up six months after the end of Season 2. Eve has left MI6 and is getting adjusted to civilian life. But when she discovers Villanelle has returned to London, she can’t help but be drawn to foil her. Meanwhile, the assassin is looking for a life outside of being a killer for hire, a journey that includes a trip back to her family home in Russia.

Has Killing Eve been renewed for Season 4?

Yes! The series was renewed for a fourth season back in January 2020, months before the Season 3 premiere. But a year later, in March 2021, it was announced that Season 4 would be the final outing for Killing Eve, though there may be multiple spin-offs in the works.