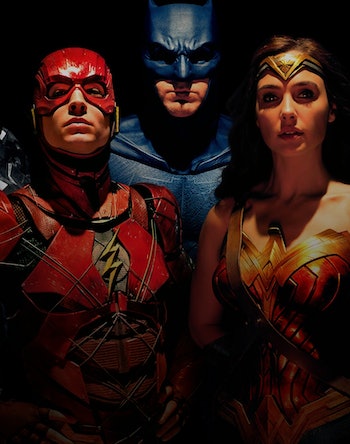 To say that Justice League is a tonal mess is to state the obvious. The film, which brings together Batman, Wonder Woman, and a couple superfriends that movie audiences have never met before together on the big screen, is all over the place. While fighting a world-ending villain whose character is as thin as the pixels he’s made up of, the team wildly alternates between grim, hard-drinking infighting, and casually cracking jokes like old friends.

None of it works, and it’s not because Justice League didn’t pick a lane. It’s because everything leading up to Justice League made things impossible for it to be a good movie.

Justice League’s plot is both overstuffed and under-baked (light spoilers ahead). Batman (Ben Affleck) and Wonder Woman (Gal Gadot) spend the first third of the film trying to get the team together, roping in Jason Momoa’s Aquaman, Ezra Miller’s Flash, and Ray Fisher’s Cyborg. An alien threat is looming, and the heroes just barely manage to get on the same page before the villain, a Playstation 2 video game cutscene named Steppenwolf, arrives. Despite putting up a decent fight in their first showdown, Batman decides the only way the team can win is to resurrect Superman. Superman’s inevitable return was hardly a secret, but it’s surprising how central it is to the plot — and how quickly it gets pushed aside and, later, resolved. There’s a lot happening, and the moments of levity and banter that Warner Bros. painstakingly inserted into the script just serve to flatten all the drama out.

The three new heroes don’t get their origin stories told, which is a relief because origin stories have been done to death. Skipping a retrod of their backgrounds is fine, but Justice League also skips the emotional work needed to make them joining the League matter. Aquaman tells off Batman when they first meet, but after fighting the bad guy in a confusing detour to Atlantis, he’s all in. Their casual camaraderie and engaging banter rings hollow, since we’re not seeing a real relationship form. Superman’s return is even more egregious on this front. He starts out dead, comes back wrong and fights the team in what’s probably the best action set piece (“like Pet Semetary,” the Flash says), and ends up making gallows humor jokes with his new buddy Cyborg. Why anything happens or changes is unclear. He’s all better just in time because the plot needs him to be

Compared to Batman v Superman, which pushed the limits of dark and gritty, Justice League is more enjoyable to watch, as it’s peppered with fun moments and glimpses of light. In a cruel twist, though, those bright spots work against the movie, since they’re suffocated by years of bad decisions that put Justice League in a tortured spot. Miller’s Flash and Momoa’s Aquaman are under-utilized, but even if their DCEU personas are a little mystifying, the actors are lively and fun. (Fisher less so, since Cyborg skips over being a character because his cybernetic parts are a high-tech yadda yadda, allowing him to be reserved and competent without being interesting.) Wonder Woman remains the standout, and it feels good to see the most famous superhero team in comics just hang out and be a team.

They don’t get much of a chance to do that, though, and when they do it feels artificial, because Justice League isn’t a movie so much as the culmination of a series of bad ideas.

The movie will invariably be compared to The Avengers, the key difference being that Marvel’s superhero team-up movie actually works. But, Avengers doesn’t just work because of Joss Whedon and a good cast — frankly, Justice League had both of those. Solo films that, back in the early days of the shared cinematic universe, still existed as mostly standalone films rather than feature-length teasers, let audiences get to know both the heroes and a villain. That framework let the Avengers focus, really, on two things: getting the team together, and tone.

Justice League can’t do that. Only Wonder Woman and Superman really have a solid sense of character from earlier films, and Superman is dead for most of this flick. Because of how eager Warner Bros. is to have a fully mature cinematic universe, Justice League needs to introduce new characters, get the team together, bring a character back from the dead, get everyone on a new status quo, and do a major tonal course correction to convince audiences that all these brand-new teammates are old friends. Oh, and save the world from a cardboard supervillain. It’s too much, and any progress the movie makes on one front tugs against another priority, stretching Justice League until it breaks under pressure.

The comparison is especially apt given Whedon’s part in Justice League, as the Avengers director took over for Zack Snyder after the he stepped down due to personal tragedy. Justice League’s problems go beyond the obvious Snyder vs. Whedon disconnect, but it doesn’t help that Whedon’s not bringing his A-game, as the witty banter and character moments feel like hastily added dressing, just like they did in Age of Ultron, a movie he directed from start to finish. Imagine how perfunctory they feel in Justice League, where he was a latecomer. Save for one party scene, the relationship between members of the team in Age of Ultron’s feels tacked-on, just like in Justice League. Unlike DC, Marvel’s usually pretty good at keeping character ahead of worldbuilding and Easter eggs. Ultron was an exception.

It doesn’t help that the climax of the movie involves stopping a cybernetic horde and saving civilians in an Eastern European city that’s being destroyed, since that’s exactly what happened in Age of Ultron.

If there’s any upside, it’s that even though Justice League is a mess, it awkwardly skips so many steps that by the end, when Batman talks about building a Hall of Justice with a big round table, what he’s teasing sounds fun, even if nothing that lead to this point was coherent or made sense. Justice League is a bad movie because it’s a sacrificial lamb, and it suffers to pave the way for a Justice League stories without all the baggage.

If that’s the case, though, why bother with Justice League? Why not just skip ahead to the good part. The movie’s already not doing a ton of real work to really introduce new characters, but it goes through the motions to its own detriment. With focus, a quick team-up can be done (The 2001 Justice League cartoon did it in 90 minutes, with commercials).

Thanks to a massive plan that started with Man of Steel, Justice League never had that option. The franchise framework became a prison, one that no amount of super strength could escape from.