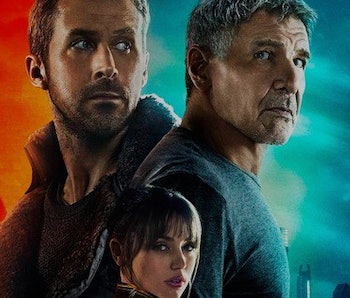 Cheekily, Blade Runner 2049 outright references the title of its source material — Philip K. Dick’s Do Androids Dream of Electric Sheep? — twice. Once is in a line of Ryan Gosling dialogue, the other comes in the form of a paper origami sheep. And yet, this sequel doesn’t really feel like the first film or the Philip K. Dick novel at all. It’s a great science fiction movie, and just as visually impressive as every single film critic will tell you. But, isn’t Blade Runner supposed to be a little more fun than this?

Blade Runner 2049 is an excellently made and pretty consistent film all the way through. It’s also way longer than it needs to be, which is okay because the movie’s greatest strength is also the biggest weakness: it takes itself really, really seriously.

Writing about the plot of Blade Runner 2049 is almost impossible without ruining something. So instead, let’s talk about the science fiction tropes on which the movie relies. As with the original film and the Dick book, the movie is constantly asking the question posed by Westworld every single week: are synthetically manufactured humans really more human than humans? From a simple dramatic standpoint, the answer is duh, yes. We sympathize with every single “good” Replicant in Blade Runner 2049 just as we sympathized with all the Hosts on Westworld. To be fair, this isn’t very hard.

Replicants look human and are played by human actors, meaning the empathy test being run on the audience is easy to pass. These aren’t boxy Cylons or deformed Borg we’re trying to figure how to love. Liking the good Replicants in Blade Runner 2049 requires zero mental gymnastics. And, because the bad Replicants all do exactly what Jared Leto’s evil Niander Wallace says, the reverse is true there: you just hate them. Which is where the synecdoche of Blade Runner 2049 emerges. That amoral grey area from the first movie is bizarrely absent this time around.

Because we never see what the Replicants were forced to do “Off-World” it makes it hard to imagine why so many ordinary people would go along with having human-looking robots as slave labor. In 2049 we have no real idea what role Replicants serve in this society, and why there are so many of them. Sure, we’re told they helped build the nine Off-World colonies, but we never see it. In Westworld, the purpose of the Hosts is clear: rich assholes play cowboy with them and sometimes have sex with them. Does Westworld — a show which rips-off the original Blade Runner — have a better grasp on creating a realistic motivation for people to act evil toward humanoid robots? Weirdly, yes. You can believe a one-percenter might want to have sex with a cowboy robot. You have a harder time imagining an entire society being cool with the human-looking slaves of Blade Runner 2049.

At one point in the film, we see a Replicant of a Replicant. This sounds about as meta as it is, but the point is, it’s also the microcosm of the entire movie. The original Blade Runner is a mess of different genres and competing visions all working to create something utterly memorable, but almost on accident. Blade Runner 2049 though, is doing everything on purpose, even its weird homages to the first movie. And so, it’s both a more consistent movie than Blade Runner and also less interesting, at least from the perspective of the big themes. Blade Runner 2049 might be more Blade Runnery than the original, but it doesn’t really have the same ruminative quality. In the original film, you really got the sense that Deckard was conflicted about Roy Batty’s death in the finale. But this new sequel is a little more literal and black and white than its predecessor.

In the philosophy department, Blade Runner 2049 is a little reductive. Any smart person would side with the oppressed Replicants this time around. With Harrison Ford in that rain, you weren’t so sure. And it was those unsure tears in the rain where you could have the most fun thinking about the film, and be encouraged to watch it again and again. I’m pretty sure I understood everything about Blade Runner 2049 I don’t really have any questions. I liked it, but I don’t need to watch it again.

Still, to its huge credit, the actual twists and turns of the Blade Runner 2049’s story are slick as hell. Just when you think you understand what the entire sequence of events has been about, you’re proven wrong. This occasionally dips into one of the philosophical strengths of the movie: wondering if anyone — Replicants or humans — have free will at all. For anyone who has friends who like to argue about science fiction concepts as they relate to stuff like free will, Blade Runner 2049 will add plenty of fodder to those conversations.

But, because this film is hell-bent on creating a startlingly depressing futuristic landscape, none of the noir or surreal charms from the first film have really survived. This Blade Runner is a new and improved model, more perfect-looking than the original in almost every single way. Which is why, occasionally, it actually feels just as fake as that robot owl that watched the sunset while Harrison Ford asked Sean Young a series of really weird questions.