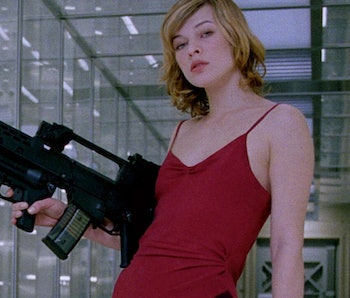 Resident Evil fans have long wished for a screen adaptation of the video games that sticks close to the original premise. We essentially got just that last year, with Netflix’s schlocky B-movie, Resident Evil: Welcome to Raccoon City, an amalgamation of Resident Evil 1 and 2.

It boasts all the fidelity we so dearly wanted, not least in various interpretations of Resident Evil’s iconic characters, from ass-kicking STARS cop Jill Valentine (Hannah John-Kamen) to the streetwise Raccoon City native Claire Redfield (Kaya Scodelario). The production design, albeit flimsy and clearly on a budget, captures many of the locations fans loved: The Raccoon City Police Department’s maze-like corridors, the Spencer Mansion’s secret passages opened via piano plinking, and Raccoon City itself, rendered the portrait of ‘90s urban Americana, a topography of dirt coffee diners and creepy orphanages.

Yet for all its fan service-y bona fides, and its nostalgic exhumation of a post-Cold War America that currently feels all the more inviting, it was an unequivocal dud. The AV Club described it as “a reboot totally bereft of the visual distinction or creative personality that often made its predecessors intriguing diamonds in the rough.” Even those seduced by its accuracy were lost in its muddy, unoriginal plotting: “Resident Evil: Welcome to Raccoon City sticks admirably closely to its source material, but an overly stuffed story and rushed third act hold it back,” wrote IGN.

Raccoon City was made, to some degree, as a reaction to the lack of exactness in Paul W. S. Anderson’s aptly named Resident Evil, a 2002 adaptation that mutated into a gargantuan cinematic franchise. But its existence — a product not only of insatiable fan hunger for something we’re more familiar with but also of the ever-whirling nostalgia factory into which Hollywood has evolved — has only served to prove that innovation is far more interesting than faithfulness. In any case, 2002’s Resident Evil has been unfairly maligned and is actually the best video game movie to date.

While sci-fi action movies once honed in on Red Scare anxieties, from the burgeoning threat of nuclear devastation through to the militaristic might of the Warsaw Pact, Resident Evil arrived during an early-2000s defined by fears of global terrorism and skepticism towards private enterprise (notably, the original title of Resident Evil: Ground Zero was nixed in response to 9/11). The Big Bad is the nefarious Umbrella Corporation, a sort of Amazon for the turn of the 21st century. Publicly, Umbrella is the biggest manufacturer of consumer products in the United States, but privately they’re at the forefront of the military-industrial complex, conducting clandestine, highly-profitable bioweapon experiments. This is where Resident Evil’s accuracy to the games begins and ends.

One such bioweapon is the T-Virus, an airborne pathogen that acts as a restart button for the dead. But as is always the case in a zombie movie, those infected don’t simply return to life: Only basic motor functions are restored, reducing the victim to a shambling shell dictated by the primal need to feed. Resident Evil begins with a deliberate leak of the virus in the Hive, a classified super facility located half-a-mile beneath the surface of Raccoon City. The facility is protected by a state-of-the-art AI, dubbed the Red Queen, who seeks to contain the outbreak by locking down the Hive and killing everyone inside.

Detecting something awry, Umbrella sends in a crack squad of commandos led by James “One” Shade (underrated B-movie mainstay Colin Salmon), who intercept Alice (Milla Jovovich), a security employee with memory loss. Descending into the Hive to investigate what caused the facility to go quiet, they find vacant offices, flooded labs, and underground capsules filled with hulking monsters. That, of course, is when the fun begins: Their first task is to shut down the Red Queen, her mainframe protected by a wall of lasers. Three of Shade’s team are variously decapitated and bisected; Shade himself valiantly tries to avoid his own death, ducking and diving away from the beam in a scene evocative of The Matrix, but alas, he’s inevitably diced into mincemeat.

“You’re all going to die down here,” the Red Queen warns before she’s unceremoniously switched off, the byproduct being that every single door in the facility is opened, the once cocooned zombies emerging from their tombs. From here on out, Michelle Rodriguez’s Rain is the main attraction, dispatching the shambling hordes with a blaze of bullets and a healthy dose of wisecrackery. “How was she still standing?” asks an exasperated soldier of the first zombie they encounter, into which he had delivered five well-placed bullets. “Bitch isn’t standing now,” Rain calmly retorts. Only Rodriguez could deliver a cold line with such heroic pizzazz.

This is all very much Resident Evil in name only: One could easily stick another nebulous, Very Evil Corporation in the place of Umbrella and all ties to the IP would be cut. Anderson’s sequels even went some way in addressing fan backlash to the remote nature of his original script, filling the likes of Resident Evil: Apocalypse with familiar locales and characters. But few, if any, video game adaptations have succeeded by way of accuracy; even if the fan impulse is to want something they can point at in recognition, well-trod ground offers little in the way of novelty. In that sense, Anderson’s film — if not his latter installments, falling foul of said impulse — has been readily vindicated.

More like this
Culture
Jan. 18, 2023
How Cloverfield saved Matt Reeves’ career — and launched a struggling franchise
By Alex Welch
Entertainment
Jan. 25, 2023
Infinity Pool is a hedonistic head-trip
By Isaac Feldberg
Culture
Jan. 25, 2023
Hansel & Gretel: Witch Hunters is a flashback to the strange excesses of 2013
By Mark Hill
LEARN SOMETHING NEW EVERY DAY.
Related Tags
Share: