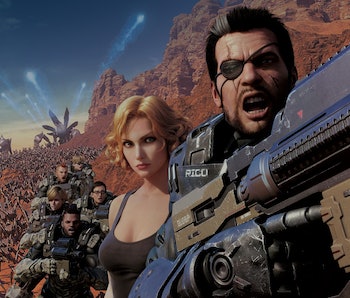 Even before its 1997 film adaptation hit theaters, Starship Troopers was hotly debated science fiction. Robert A. Heinlein’s best-selling 1959 novel is set in an imagined future world where only people who serve in the military are considered citizens and everyone else has basically zero say over their governance. Also, there are giant alien bugs.

Heinlein’s treatment of the pro-fascist themes is somewhat muddled. (If the author were alive today, he would probably be described as a left-leaning libertarian, or perhaps a centrist conservative.) That said, there’s plenty of evidence and arguments to suggest that Heinlein intended Starship Troopers to depict a somewhat fascist government, rather than to endorse one.

The 1997 movie version of Starship Troopers pretty much takes any pro-fascist or blatantly conservative depiction and flips it all into satire. “Do you want to know more?” the viewer is asked again and again through a variety of faux-futuristic newsreels designed to mock the idea that the government in Starship Troopers is anything close to honest. That the Terran Federation is corrupt as hell is a running theme that pervades all five Starship Troopers movies. And yet, throughout the entire franchise, the corruption of the Federation is never so clear as it is in the animated fifth sequel, Traitor of Mars.

Traitor of Mars is an uneven slog, and truly only great for a certain kind of completist who is obsessed with the cinematic universe of Starship Troopers. The gear worn by the Mobile Infantry at this point will remind you more of Clone Troopers from The Bad Batch than the soldiers from the 1997 film. Having Casper Van Dien’s voice reunited with Dina Meyer’s gives the movie some nostalgia points, but not near enough to call this a slam-dunk.

Instead, the true strength of the movie is the way in which it circles back to the central question of the whole problem with Starship Troopers: Are we supposed to be rooting for this super-corrupt government or not? In Traitor of Mars, Rico is saddled with new recruits from the titular red planet and finds them lacking in ability. But more than that, Rico is annoyed by a streak of basic apathy in the human Martians, especially toward the Terran Federation. Essentially, the people of Mars don’t care as much about Federation patriotism as the other humans, and with good reason.

This notion vaguely recalls another Robert A. Heinlein novel, The Moon is a Harsh Mistress, all about a possible secession of lunar colonists. The Martians in Traitor of Mars aren’t actively trying to leave the Terran Federation, but it is very clear that people in power on Earth think they’re terrible. The thrust of the movie is focused on Rico figuring out how to overcome his biases toward his wayward squad, even though they are Martians.

All of this finally lets the cinematic Starship Troopers universe arrive at a philosophical conclusion most of the franchise struggled to fully explore. The people of Mars are victims of the cruelty of the Federation. Rico’s prejudice against his Martian squad is also proof that even the best people can still fall into horrible classist patterns. The basic structure of the Starship Troopers movies created a critique of a class structure.

Other sci-fi franchises have done this much better (The Expanse springs to mind), but what is funny about all of the Starship Troopers movies is that they never committed to getting into what made those classist distinctions bad. There was always another bug to blow up or another spaceship to crash. However, with Starship Troopers: Traitor of Mars, the impact of the Terran Federation’s cruelty finally made sense. Even the 1997 movie couldn’t pull that off.

Starship Troopers: Traitor of Mars is available to rent on Amazon and elsewhere.