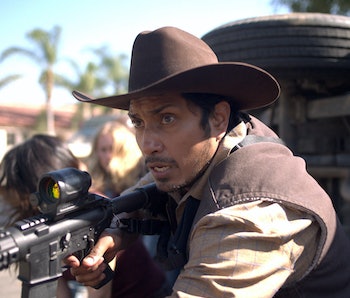 Tenoch Huerta is enjoying a moment in the spotlight after portraying the memorable antagonist Namor in Black Panther: Wakanda Forever. But the sequel wasn’t technically a breakout role for Huerta, who’s been a rising star in Mexican and American film and TV for over a decade. In fact, his transition from domestic celebrity to international sensation can be traced back to last year’s boldest horror flick.

The Forever Purge, the fifth and supposedly final film in the Blumhouse franchise, pummels you even harder than its predecessors with its overt anti-fascist, anti-American exceptionalism stances. To give you a sense of its approach, the phrase “bad hombres,” used by Donald Trump during his 2016 campaign, is employed more than once by 2nd Amendment nuts with swastika tattoos.

Tenoch Huerta leads a solid ensemble cast, while The Forever Purge’s engaging storyline meshes the aesthetics and combat choreography of classic on-the-border Westerns with the franchise’s signature Purge-y sensibilities. Following the events of Charlene Roan’s (Elizabeth Mitchell) uplifting presidential win in The Purge: Election Year, everything goes to hell again. The New Founding Fathers of America have been re-elected, and they’ve reinstated the annual Purge. When that day comes, all crime is legal for 12 hours, aside from select exceptions that protect people of power.

The Forever Purge begins with a married migrant couple, Juan (Tenoch Huerta) and Adela (Ana de la Reguera) who illegally cross the border into Texas to escape the narcotraficantes that have haunted their lives. Juan starts anew by working as a cowboy for the wealthy Tuckers, while Adela finds employment in a factory near Austin.

Some of the Tuckers aren’t wild about Juan’s farmhand skills and have anxieties over immigrants “replacing” Americans. But most of the family isn’t explicitly hateful either. And, like Ana and Juan, they opt to skip the Purge. Though the families may have cultural and racial differences, they share similar values.

All seems well the morning after the Purge, until an even more extreme group calling themselves the Purge Purification Force declares that this Purge will last forever. Widespread bloodshed ensues, and the United States finds itself completely unprepared to handle a heavily-armed group hellbent on exterminating anyone they consider un-American.

Canada and Mexico open their borders to take-in refugees for a few precious hours, while Ana and Juan save their employers from a group of Purgers. Together, they try to beat the clock and escape to the place they swore they’d never return to.

But other than having another opportunity to watch Tenoch Huerta on-screen, is The Forever Purge actually any good? We’ve waxed poetic about the franchise before, but mostly about its untapped potential. Why does this hyperbolic dystopia always miss the mark on its subtextual social commentary?

Maybe it’s all the clownish masks, the shaky writing, or the fervent need to incorporate jumpscares into a franchise that’s begging to be freed from horror and planted in the psychological thriller genre where it rightfully belongs. Whatever the reason, all the salient points the movie is trying to make about nationalist extremism, the unhealed scars of bigotry, and the glorification murder are hopelessly muddled.

At the same time, Purge movies are meant to be fun. Maybe filling a movie with neo-Nazi zanies that shout out Trump catchphrases while hunting the homeless and people of color is an exaggerated caricature that makes for an easier sale, but at a certain point the premise becomes exhausting. “Hey, these guys are bad” can work the first time, but for your fifth movie you need a stronger argument.

Still, The Forever Purge is one of the better Purge flicks. Though superficial, its inclusion of immigration issues and related topics — the fear that immigrants are “taking our jobs,” the pressure to assimilate and abandon your native culture — is admirable for a genre that’s traditionally steered clear of such overt stances.

It helps that Tenoch Huerta and Ana de la Reguera steal every scene they’re in. Even as a goofy amount of lawlessness and disorder unfolds around them, they remain the bleeding heart of the film. It’s rare to see an immigrant couple that loves each other fiercely, treats each other as equals, and protects those in and out of their community in mainstream American media. There’s no white savior here. Juan and Adela help themselves. That makes The Forever Purge worth a watch.

The Forever Purge is streaming on HBO Max.

More like this
Culture
November 24, 2022
One of A24’s least-seen movies is also one of its most intriguing
By Dais Johnston
Culture
November 22, 2022
Steve Spielberg's secret horror classic is about to leave HBO MAX
By Laura Kelly
Culture
November 21, 2022
Roland Emmerich's most ridiculous movie isn't quite as funny as it used to be
By Mónica Marie Zorrilla
Related Tags
Share: