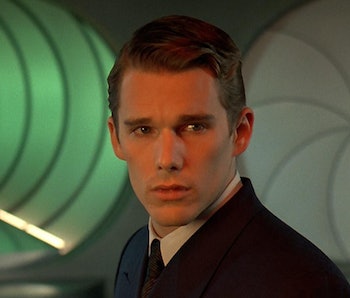 Nobody loves Gattaca for the plot. If you tried to shove its story into a sci-fi novel, it would fail. This is the specific reason why, 25 years ago, Gattaca was a critical success. And now, all those years later, we love it not for what it had to say, but for how it made us feel.

Gattaca’s basic story borrows from the short-hand status quo of other near-future dystopias. It’s got aspects of 1984 and Brave New World in equal parts. Eugenics controls every element of society, and you must be perfect to be considered genetically “Valid” for all the top jobs. Hilariously, this makes Gattaca perhaps the only Hollywood movie in which casting people elevated to unrealistic standards of beauty made perfect sense. Uma Thurman and Jude Law circa 1997 are “perfect,” and Ethan Hawke is of a lesser caste.

Visually this works, and it’s a sort of accidental metaphor for how this kind of art functions. Ethan Hawke isn’t “ugly” by any stretch of the imagination, but you couldn’t really cast it the other way. Hawke couldn’t have played a “Valid,” and Jude Law couldn't have played an outcast. Gattaca is about what people look like, and how that discrimination is horrible and frightening. But these casting decisions also reminded us that this oppressive problem isn’t something possibly coming in the future. That oppression is here.

And yet the paradox of Gattaca is that we love seeing the depressing beauty of this oppressive future. Gattaca isn’t a black-and-white movie, but the way Andrew Niccol shot it gives it the feeling of being old. The film feels like something you’re already familiar with, a trick few sci-fi films can manage.

LEARN SOMETHING NEW EVERY DAY

Measuring the impact of Gattaca is a bit tricky. No one would have wanted to imitate this movie exactly, but it’s hard to imagine good films like Equilibrium (2002) or bad ones like The Island (2005) without Gattaca coming first. If the moral vibe of Logan’s Run were fused with the visuals of a Carey Grant movie like To Catch a Thief, you might have something like Gattaca, which is not a combination anyone imagined before or since.

Even aspects of A.I: Artificial Intelligence (2001, and again, Jude Law) and I, Robot (2004) feel like the basic aesthetic template is borrowed from Gattaca. Visually, it’s the movie George Lucas wished he had made with THX-1138 (1971) but with a more romantic soul, and memorable performances.

If anyone ever tells you there’s a new movie coming that reminds them of Gattaca, they’re almost certainly wrong. And yet, if such a movie were to exist, it would have tremendous potential. Ultimately, the possibility of more Gattaca-esque sci-fi movies is slightly more exciting than the movie itself. While watching it, you can’t help but wonder; why can’t more sci-fi movies be like this?