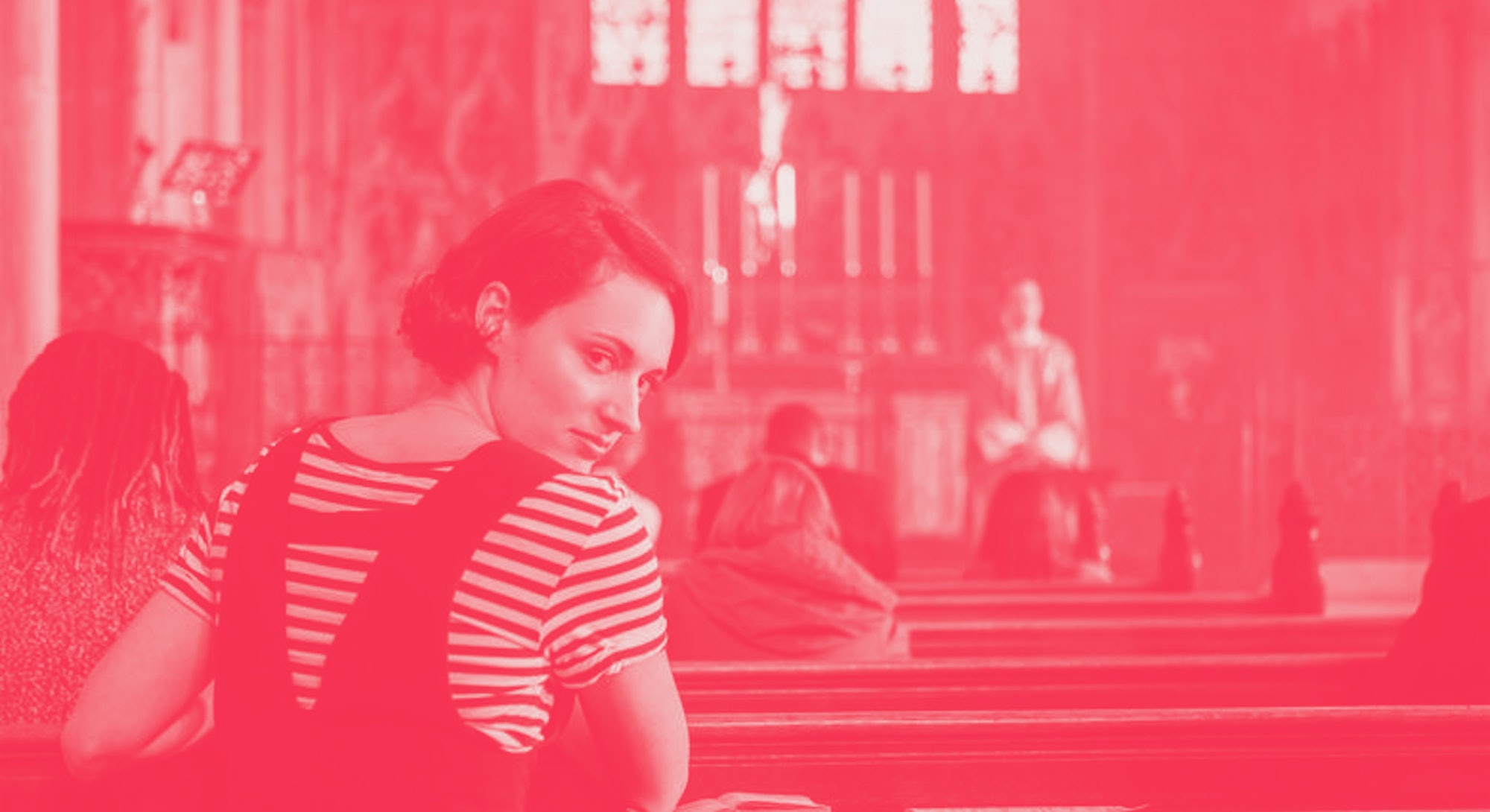 You’re only in my head. We have to remember that.

Rami Malek says these words straight to the audience in the opening scene of Mr. Robot — a fitting introduction to the mind of our protagonist Elliot, a mentally ill hacker whose reality is ruled by his own vivid hallucinations. Perhaps the ultimate unreliable narrator, Elliot’s altered perception characterizes the reality of the show in ways big and small: from entire imagined conversations to how he hears people refer to his employer E Corp as “Evil Corp.”

He’s not the only one. In recent years, television has seen an influx of delusional protagonists who make a habit of confiding in their audience. Spanning from musical comedy-dramas like Fleabag and Crazy Ex-Girlfriend to multi-season thrillers like Mr. Robot and You, these shows all revolve around the inner lives of characters experiencing a major break from reality in the wake of a traumatic event or mental illness. Instead of addressing these problems, they engage the audience as an escape. And we, in turn, can escape our own problems by diving into the chaotic headspace of an unreliable narrator.

Why is inhabiting this fraught headspace so appealing to modern audiences?

In Mr. Robot, Elliot’s narration immerses the viewer in the partially fictionalized world of his own delusions. In You, we are subject to Joe’s mental gymnastics as he justifies the motives behind his romantic obsessions. In Phoebe Waller-Bridge’s Fleabag, the unnamed heroine narrates her life to the audience, drawing us in with dark humor and acerbic wit. Rachel Bloom’s Crazy Ex-Girlfriend explores Rebecca’s rich fantasy life through elaborately choreographed musical numbers that provide her with an escape from the existential malaise of day-to-day life.

Breaking the fourth wall isn’t new. From Shakespeare to The Lion King, countless storytellers have used direct address to tear down the invisible barrier between performance and audience. But for these protagonists, the audience is a real symptom of their own disordered thinking — and through unconventional stylistic devices like hallucinations and direct address, viewers are plunged directly into the tumult of their altered reality. The widespread success of these shows begs the question: Why is inhabiting this fraught headspace so appealing to modern audiences?

In Mr. Robot and You, both protagonists address the audience as a stand-in for a specific person. “Hello you,” intones Joe (Penn Badgley) with an aura of fond familiarity; “Hello friend,” Elliot greets us, albeit in a more disaffected monotone. In You, Joe confesses his motives to us instead of the woman he’s obsessed with; in Mr. Robot, Elliot addresses us as his imaginary frenemy, alternately calling on the audience for help or chastising us for withholding information. In contrast, the protagonists of Fleabag and Crazy Ex-Girlfriend both use the audience as an emotional crutch, turning to us in the midst of everyday interactions as a coping mechanism that bleeds into the show’s reality. When things get too real, Rebecca lapses into elaborate fantasy narration, while Fleabag leans on the audience to reinterpret her life through a comedic lens.

Crazy Ex-Girlfriend opens on Rebecca Bunch (Rachel Bloom), a successful but miserable corporate lawyer who runs into her childhood crush on the streets of New York and impulsively relocates her entire life to his California hometown, abandoning her career in the process. Prone to fits of delusional thinking, narcissism, and extreme insecurity, Rebecca’s quest to claim her romantic destiny simultaneously epitomizes and parodies the worst cultural messages about femininity.

The show’s hallmark musical numbers — which range from rap parodies to riffs on Sondheim — function both as a coping mechanism for Rebecca’s undiagnosed borderline personality disorder and as an interpretive lens for the audience. Her refusal to confront the unhealthy nature of her behavior is expertly lampooned in songs like “(She’s the) Crazy Ex-Girlfriend I’m Just A Girl In Love”, where she bills her obsession with Josh as harmless (“I have no underlying issues to address / I'm certifiably cute and adorably obsessed!”) and her move to California as a happy accident (“It happens to be where Josh lives / But that's not why I'm here.”)

But Rebecca eventually acknowledges the show’s core mechanic, confessing to her therapist that “when things get tough, that's how I understand the world... I imagine my life as a series of musical numbers.”

In the first season of You, bookshop clerk-cum-stalker Joe Goldberg (Penn Badgley) obsessively reorients his entire life around a chance encounter with Beck, much like Rebecca does with Josh. Both protagonists insinuate themselves into their crush’s lives, orchestrating real-life interactions through a combination of analog and digital stalking.

It’s later revealed that this isn’t their first rodeo; these characters have both struggled with a lifelong pattern of emotional manipulation and romantic obsession. (In flashbacks of repressed memories, we learn that Rebecca attempted to burn down the house of the last man who dumped her, and Joe buried his ex-girlfriend alive. So no, the heteros are not alright.)

Even after successfully maneuvering themselves into serious relationships, both characters resort to increasingly out-of-touch behavior in an attempt to control the outcome. Rebecca’s misdeeds remain at a comedic simmer throughout the show, while Joe escalates to increasing acts of violence under the guise of protecting Beck and his place in her life. This ultimately culminates in him killing Beck to avoid losing her, but don’t worry, Joe finds a new obsession in You Season 2.

These shows mine their protagonist’s delusional thinking to different ends, but ultimately induce a similar feeling of unease by forcing us to interface with the world through an increasingly out-of-touch perspective. It’s hard not to cringe at Rebecca’s total lack of self-awareness, or wince as Joe justifies yet another intervention on Beck’s behalf—but as they spiral out of control, it becomes impossible to look away.

In Mr. Robot, we’re embedded in the mind of Elliot Alderson (Rami Malek), a socially withdrawn cybersecurity engineer who moonlights as a vigilante hacker. Because he suffers from a cluster of mental health disorders — dissociative identity disorder, clinical anxiety, depressions, and paranoia chief among them — Elliot’s feverish reality is also heavily influenced by his mental illness and, at one point, an addiction to morphine. His most pernicious delusion is Mr. Robot, the mysterious leader of an underground anarchist group with a habit of giving unsolicited advice. “The world is a dangerous place,” he cautions Elliot. “Not because of those who do evil, but because of those who look on and do nothing.”

Elliot has always wanted to save the world. At the beginning of the show, we see him hacking the people he suspects of wrongdoing and using the evidence to blackmail them into doing the right thing. The moral ambiguity of hacking strangers on a whim, however, seems to go over his head — and, much like Joe, he frames his violation of others’ privacy as an attempt to protect them.

However, neither character is very good at reading the room. Elliot’s therapist Krista feels understandably violated when she learns that he thoughtfully blackmailed her boyfriend into dumping her. Similarly, Beck wasn’t thrilled to discover that Joe’s love language is killing every toxic person in her life.

In Fleabag, we witness the emotional journey of a nameless protagonist (Phoebe Waller-Bridge) hurtling through life in the wake of her best friend’s death. Narrating everything from sexual exploits to dysfunctional family dinners, Fleabag pulls us into her slipstream with intimate commentary that swings between frenetic comedy and profound vulnerability. She courts our gaze, compulsively converting internal conflict into humorous asides for the audience. But as we watch her grapple with her own dissociative tendencies, it becomes increasingly clear that her caustic quips and witty commentary are being used to distract from the profound anguish just beneath.

This storytelling mechanic is complicated in Season 2 with the introduction of the “hot priest” (Andrew Scott), who recognizes the dissociative tendencies that drive this behavior. “What was that? Where did you just go?” he exclaims during a moment of her hallmark fourth wall breaking, following her gaze offscreen and momentarily locking eyes with the viewer. She tries to minimize, but he insists: “You just went somewhere.” Unable to curb the impulse, she shoots a very freaked-out glance in our direction.

This development produces an uneasy thrill. Until this point, Fleabag had seamlessly integrated us into the narrative as a neutral presence. But with the priest catching on to her dissociative tendencies, the warm glow of intimacy recedes and we’re left to consider the true nature of our dynamic. Are we truly Fleabag’s most trusted confidante, or does her compulsive narration function as a smokescreen for real intimacy?

All of these shows embark on an ambitious internal journey through the protagonist’s psyche. Rather than driving a wedge between the audience and the events occurring onscreen, the characters’ use of direct address brings us uncomfortably close to the workings of neurotic, unstable, and delusional minds. The viewer is forced to see the world through their eyes, even as we chafe at the singularity of their perspective.

At times, watching You and Crazy Ex-Girlfriend invokes a sense of secondhand embarrassment: both characters are so out-of-touch with reality that their behavior is transparently cringe-worthy to witness. Fleabag and Mr. Robot provoke a similar sense of entrapment as we watch their protagonists simmer in their own self-destructive tendencies, committing various infractions that we can only suspect will add up to disaster (picture Fleabag stealing the statue, or Elliot conspicuously purchasing morphine without his usual anti-withdrawal meds.)

Yet something about watching this slow-motion car crash invokes not only foreboding but catharsis: rather than embarking on our own adrenaline-fueled roller coaster of self-destruction, the audience can curl up on the couch and binge theirs on Netflix. We may be using their stories as an escape hatch from the existential ennui of our own lives—but at the end of the day, watching them spiral into their own self-perpetuating version of reality is a potent reminder of the role we play in our own.