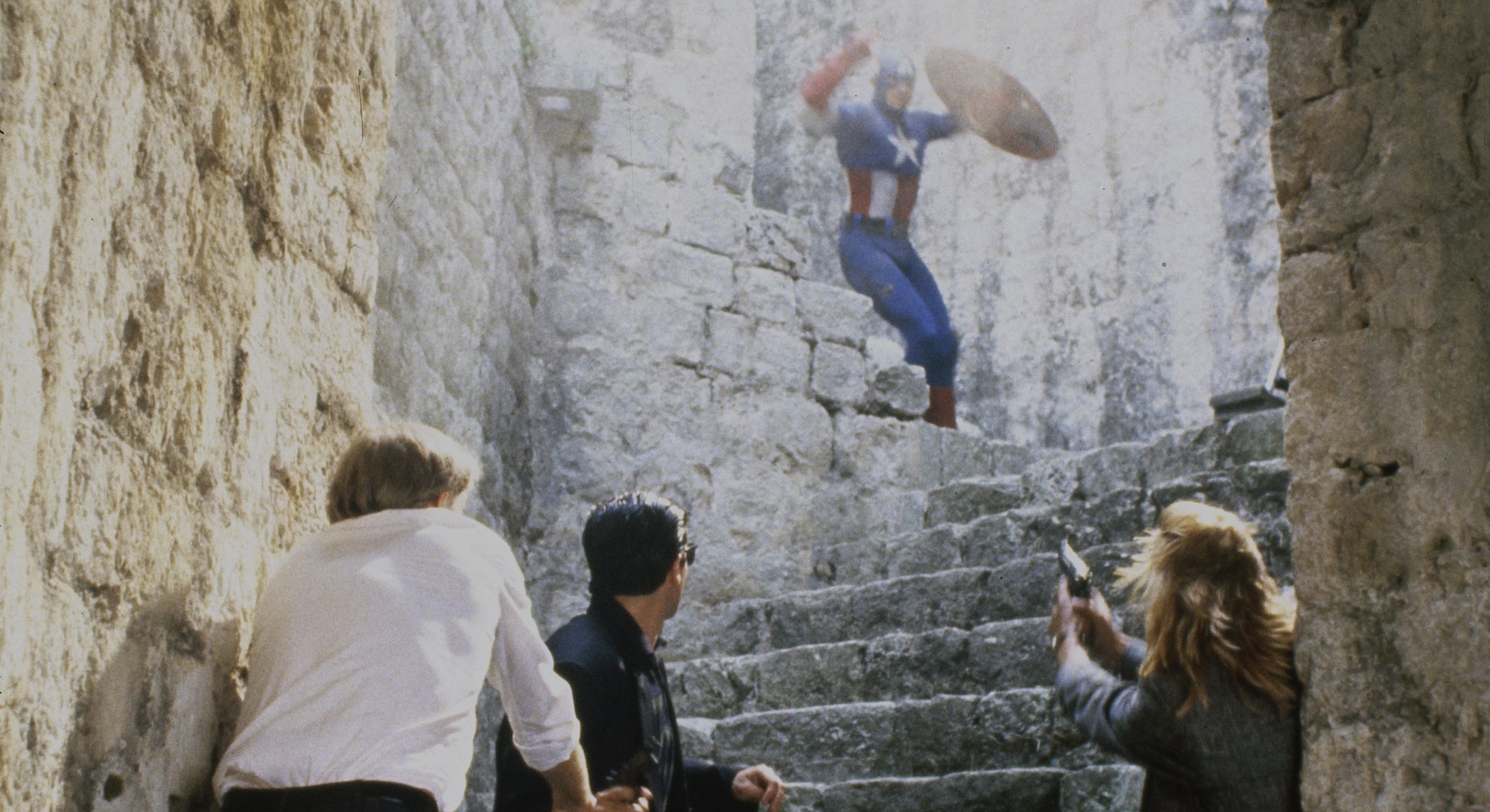 Thirty years ago today, we got the first major superhero motion picture in American theaters to kick off the ’90s: Captain America.

Technically, this film was released in the UK in 1990, but the U.S. didn’t get the theatrical release until two years later. Starring Matt Salinger (the son of author J.D. Salinger) as Steve Rogers, the film’s plot crams together Captain America’s World War II origin story against the Red Skull with a present-day story riddled with Mafia paranoia and a pro-environmentalist message.

Comic book fans will recall that the ’90s were not a kind decade for superhero movies. They were generally cheesy at best, bland at worst, and mixed with some bad writing and crappy visuals. Captain America may be the first Avenger, but this Captain America is a hallmark ’90s dumpster fire. We have a long way to go before we get to X-Men (2000) — let alone Captain America: The First Avenger.

Our opening scene takes place in Italy, where we see the creation of Captain America’s nemesis, the Red Skull.

In a confusing twist, the movie has made the Red Skull Italian instead of German, which isn’t canon in any other Marvel media. Given that Captain America has always been used as anti-Nazi propaganda and the Red Skull became a symbol of the Nazi Party’s carnage and totalitarianism, it really makes no sense.

Historically, Italy may have been home to the original fascists, but the Nazis have always been seen as the real juggernaut of World War II. If the original Red Skull had been Italian, he would probably be more concerned with trying to invade Greece and figuring out a way to deal with the country’s dwindling resources (answer: surrendering in 1943).

The only possible explanation here likely has something to do with waning paranoia related to the American Mafia. The Racketeer Influenced and Corrupt Organizations (RICO) Act was passed by Congress in 1970, which proved vital to bringing down criminal enterprises in the 1980s and 1990s. Captain America seems to wonder: What if instead, a superpowered and ageless Italian with cheeseless pizza skin worked as part of a global crime syndicate to preserve fascism?

The movie obviously tries to give the Red Skull a tragic backstory and portray him as a victim of fascism, but this only works when more depth is provided into the villain’s psyche. We only see the Red Skull’s tragic transformation as a child experiment in the first scene and briefly witness his PTSD used against him before receiving his final death blow.

Without more character development, trying to garner sympathy for a villain falls flat... especially when he’s still basically a Nazi. As for our Captain America, I will say that Matt Salinger definitely looks the part of Cap.

The problem is that he always looks like the final Captain America product. There’s no visible difference between this Steve Rogers’ pre-procedure and post-procedure self. He looks like Chandler Bing in both versions.

He’s supposed to have polio, but that’s easy to forget about when all Salinger does is throw in an obligatory limp. Character-wise, Steve is fairly bland; he’s patriotic but crippled by polio. He loves his mom and girlfriend. That’s about it.

While this Captain America might have the look down, he’s not even impressive to watch when he’s in action. The MCU Captain America had extensive training before heading out to kick Nazi butt. This Steve Rogers has been Captain America for less than an hour before getting thrown in a super suit and kicked out of a plane into the middle of a Nazi hideout. This guy had polio for his entire life until 30 minutes before this.

And disappointedly, he gets his ass handed to him.

In under five minutes, he’s strapped to a rocket. The Red Skull may look like an infected tomato, but he’s had seven years of preparation. A fancy, patriotic American flag suit is no compensation for combat training.

Cap only manages to keep the missile from crashing into the White House with a lucky well-placed kick that somehow changes its course and crashes in Alaska — where he’ll stay preserved in deep freeze until his thaw-out in the ’90s. (Cue the muddled commentary on climate change!)

What’s also kind of sad is that the most interesting character to watch isn’t the titular hero, but side character President Tom Kimball, who is sort of the focus of everything.

Kimball is an honest and upstanding leader who wants to enact worldwide environmental policies in an earnest effort to save the planet. When the Red Skull schemes to kidnap Kimball and implant him with a mind control device, not only does Kimball use his own ingenuity to escape his prison cell, he’s willing to commit suicide rather than let this lunatic use him to take over the United States.

Yes, Captain America arrives before this happens, but Kimball has to go save Cap minutes later when he loses his shield. While the injured Red Skull slowly crawls toward his machine gun, Cap is incapable of doing anything except standing and watching him until Kimball tosses his shield over.

It’s not a good sign for a superhero film when I’m more invested in this side character than the superhero. Captain America seems to be desperately reaching for something to say, which may be that all it takes is patriotism to be a real hero — at least on American terms, anyway.

Captain America is clearly a relic of ’90s superhero movies. It will probably only interest fans from a historical film perspective, but not from a cinematic standpoint. If you are curious about this movie, don’t go into it expecting a thrilling, epic superhero story — expect a boring slog of a story with very underdeveloped characters whose main purpose is to serve as an example of how poorly superhero movies were made before the Marvel renaissance.