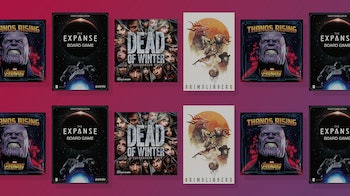 Whether it's alien invasions or the zombie apocalypse, sci-fi board games keep your brain engaged while being loads of fun, too. The best sci-fi boards games blend exciting storylines with beautiful artwork and are satisfying enough that you'll want to play them again and again.

There’s a wide range of genres out there so a big part of your decision will depend on your personal interests. Do you like things like outers space and time travel, or are you more into fantasy and world-building? How about comics and superheroes? Apocalypses and dystopias? Before you start shopping around, think about the themes you’re most drawn to.

Another thing to consider is how complicated the game is and how much strategy is involved. Just like when you're picking out a theme or concept, one isn’t better or worse. It just depends on whether you prefer simpler games that are easier to learn or more complex structures that take longer to master.

Below, I’ve included an assortment of the best sci-fi board games out there. I made sure to include a wide variety of themes, as well as a mix of difficulty levels, both in terms of learning and winning. All of them have solid pieces, durable construction, and stunning accompanying art.

1. A game of interstellar political intrigue where you use strategy to rule the solar system

The Expanse Board Game
Amazon

The lowdown: For folks who like concepts based in outer space, this is one of the best strategy board games out there. Adapted from the cable TV show of the same name, the objective is to build and expand your sphere using political tactics, conquering the solar system as you go. It's easy to learn and it features sturdy, durable pieces.

One fan wrote: "Great game. Takes the core mechanics from GMTs twilight struggle and makes it much more accessible. Two player is good but three and four player is where this game shines. I cannot speak highly enough of the game."

2. This tactical dice-throwing game that lets you fight monsters and demonic invaders

The lowdown: If you're into swords and other combat weapons, you'll love this hack-and-slash board game which is one part fantasy, one part science fiction. The idea is to create your own hero in an attempt to kill the Lord of Demons, slaying loads of his minions along the way. The pieces are well-made (but artfully constructed) and the game is easy to learn, according to fans on Amazon.

One fan wrote: "Easy game to learn medium to master, great game over all been playing everyday"

3. A cooperative game of survival filled with flesh-eating zombies

The lowdown: Zombie-lovers will be hooked on this fast-paced science fiction board game that requires you to work with other players to stay alive. Band together with your colony of survivors, fighting flesh-hungry zombies while scavenging for food and other resources. The catch, however, is that even as you help your fellow survivors, you must also complete personal objectives that are sometimes in conflict with the group imperatives.

One fan wrote: "I absolutely love playing dead of winter with the family and it’s always one of the games I recommend for people to try out. My board game collection is right at 75 and dead of winter makes the top 10.It does have a very steep learning curve and will be a little slow the first few games. But once you have two or so people that know how to play the game, teaching others takes no time at all."

The lowdown: Set in a harsh and desolate (yet strikingly beautiful) wild West, Grimslingers is a unique sci-fi board game that incorporates wizards, witches, robots, and other mythical creatures into a fantasy battle. It's a cooperative game so you'll work with other teammates to cast spells and partake in magic. The artwork is exceptional and the storyline is engaging. Just be warned that several reviewers called it "complicated."

One fan wrote: "We bought this game for the art, with no knowledge of the gameplay. Grimslingers is a FANTASTIC game, but be warned: it is COMPLEX. This is probably the most complicated board game I have ever played, and it's not even a board game! just cards [...] Overall, great game! I totally recommend it."

5. A wildly popular cooperative game where you'll play as your favorite Marvel characters

The lowdown: The goal of this Avengers board game, which takes place during the Infinity War, is to get to Thanos and defeat him, along with his nefarious cohorts — all before he can manage to acquire all of the prized infinity stones. This game features sturdy playing cards, colorful dice, and a cool collector's mini-sculpture.

One fan wrote: "I love board games but it's hard for me to find one that I'd like to play over and over after I finished a game. Thanos Rising is so much fun and thought-provoking that it keeps my interest. After I finish a game I want to play again. Every time you play it's different so you have to figure out a different strategy. I didn't think I'd like this game that much and I didn't think it'd be worth the price but it definitely is!"

6. This quick-paced game where you escape an infected planet while fighting hostile alien creatures

The lowdown: As far as alien board games go, this one ranks among the best. After your interstellar research group gets lost in space, you have to build a satellite to call mission control while battling monsters and enemies (while not knowing who is infected with an alien entity). It's easy to learn, beautifully illustrated, and super fun to play, according to reviewers.

7. A tactical combat game that involves pitting your marines against bloodthirsty monsters

The lowdown: Based on the eponymous video game, Doom is an action-packed combat board game where you play a marine fighting a world of gruesome monsters. The world-building game, which fans pointed out is complex but not difficult to learn, involves combatting demons in ominous dungeons. Of all the games on this list, this one involves by far the longest play time (upwards of two hours), so you'll want to put aside ample time for it.

One fan wrote: "This is a fun game. The rules are similar to the video game. For example, the closer you get to the end the more formidable the monsters become. The game is challenging enough to allow for hours of play without being overly complicated with a ton of rules."

More like this
Culture
5.20.2022 11:30 AM
You need to watch The Rock’s most subversive sci-fi thriller before it leaves HBO Max next week
By Eric Francisco
Culture
5.18.2022 9:00 AM
Every Stranger Things monster from Dungeons and Dragons
By Robin Bea
Culture
5.17.2022 8:30 AM
The 10 best Black Mirror episodes ever, ranked
By Robin Bea
Related Tags
Share: