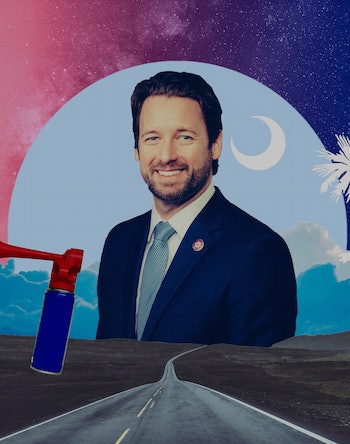 South Carolina Congressman Joe Cunningham is the sponsor of the Coastal and Marine Economies Protection Act, which would ban offshore drilling along the Atlantic and Pacific Coasts. Congress will vote on this bill the week of September 9.

Below, Cunnigham explains why this bill is something worth fighting for.

I grew up on a lake in a very rural area, but there’s nothing that can compare to seeing the Atlantic for the first time and experiencing its vastness. Being on the edge, right there on the water, is a retreat for me. I try to go to the beach on Saturday and Sunday mornings with my dog and my son, Boone. It’s my place of peace.

My son is 17 months old, and I want him to grow up on the water. I want him to enjoy the same things that I have enjoyed. When I read about coral reefs dying off, and beaches and waterways becoming polluted, I think about the tremendous experiences that he could be robbed of. I want to help preserve the ocean and make sure he inherits it in a better form.

My background is in ocean engineering, so I’ve spent a lot of time in the water. I worked on a boat before going into law school; I actually met my wife on the water. When I have free time, I like to be out there —either surfing, boating, or fishing.

“If you have something like that, which you love so much, you’re going to fight like hell to protect it.”

So my bill, H.R. 1941, is personal. It is not just a matter of me doing my job here. It’s about protecting something I love and I know that my neighbors love. The ocean is something that makes us special and distinct down in the Lowcountry. It’s a way of life down there. And if you have something like that, which you love so much, you’re going to fight like hell to protect it.

This bill will ban offshore drilling off the Atlantic and Pacific seaboards. It’s been passed out of the Natural Resources Committee and will be coming to the House floor within the next couple of months. It’s also fulfilling a campaign promise within my first eight months in office.

Once the public realized how close we were to seismic airgun blasting permits being issued, and the rigs showed up along our shoreline, that’s when people started to kick it into high gear. They realized that offshore drilling was something we needed to be actively fighting against.

This bill has broad bipartisan report. Some of the Republicans who are in low-lying, exposed coastal areas recognize that we’re energy-independent as a country now, and we don’t need to expose our beautiful beaches, creeks, and waterways to the dangers of offshore drilling. Those Republicans recognize that the idea of being conservative should also apply to our natural resources — we need to conserve them, not spoil them.

At the beach, there’s no parking spot specifically for Democrats or Republicans. The beach, and the ocean, does not belong to one specific political party. We are all out there together; it’s available for all of us to use. But we need to make sure that it is protected for generations of future use.

Sourced from an in-person interview.

Joe Cunningham is a member of the Inverse Future 50.