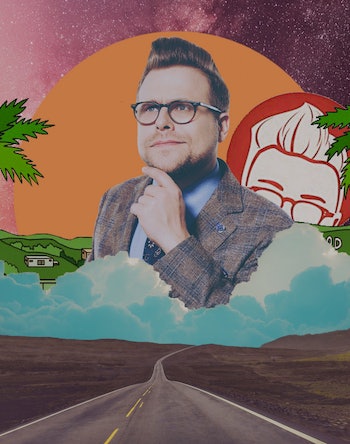 Adam Conover consumes a great deal of information and doesn’t much care to keep it to himself. In fact, his coworkers at CollegeHumor began a Tumblr to collect some of his most opinionated stances.

“So unbeknownst to me, my co-workers were recording things that I had said that were sort of opinionated or undermining statements. Owen Parsons started the ‘Opinionated Adam’ blog, which was fun. It was just quotes of me saying opinionated things about things,” Conover tells me.

Was he particularly happy about this?

“It wasn’t mean-spirited, but it was definitely, you know, in the ‘comedy writers giving each other shit’ category. But it was one of those things that helped me identify, ‘Oh, here’s what’s funny about me,’ that I say things like that. If you go back and look at them, a lot of them are Adam Ruins Everything type things. ‘Don’t use that hand sanitizer. You’re going to create a superbug.’”

Now, the premise of “Opinionated Adam” has been blown up by the 36-year-old Conover himself, who stars in Adam Ruins Everything on truTV, with older seasons on Netflix, iTunes, and Amazon. The show plays on Conover’s aggressively cheerful delivery of dry, dispassionate facts.

Did you know a lot of salmon is just dyed pink to make it look appetizing? Gross.

“I think [that episode] really solidified the idea of the show for a lot of folks.” Conover tells me. In its three seasons and more than 50 episodes, Adam Ruins Everything has covered everything from urban legends about Mount Rushmore to just how necessary airport security really is. Every claim in the show is backed up by a credible study or article, the full list of which is available on the A.R.E. website when the show airs. Still, even with more information than ever at our disposal, you’re going to get a few things wrong.

“Last year, we had ‘Emily Ruins Adam Ruins Everything’ that was about the backfire effect, the things we might have researched better, et cetera. This year, our season finale is called ‘Adam Ruins Himself.’ And it is really an examination of our entire show’s process, from every angle.”

A comedy show based around shattering many taken-for-granted facts of life requires both strenuous research and a deft hand when it comes to actually making it funny. No one likes to be told they’re wrong, not least by a well-dressed white man with gravity-defying hair. Conover knows this, and while he giddily “ruins” everything, near every other cast member on the show treats him with open contempt.

“As a comedian, you’re just constantly trying to figure out how to get people to give a shit, right? That becomes a harder thing. You figure out how to tell a joke that’s funny and to get people to laugh. After a while, getting people to laugh becomes the easier part, and the harder part is like, ‘How do I get people to give a shit about what I’m saying?’ Or to care that it’s me saying it. My shtick is ‘information is fun!’ And when I started talking about them on stage and doing them as videos on CollegeHumor is when people started paying attention to what I was saying. I could tell there was a different sort of response, and I kept building on that. I thought, this is the service I can provide. This is how I can differentiate myself. What can I do that no one else is doing?

Conover doesn’t have too righteous of a philosophy when it comes to battling disinformation in the undisputed age of disinformation. He just wants people to know a little bit more about the world in which they live.

“It’s not like I derive pleasure from arguing with people or anything like that,” he said to me when I unhelpfully asked if he’s always enjoyed subverting preconceptions. But, as he put it earlier, it is a service he’s providing. That service is just wrapped up in a maniacally edited comedy show.

In one of the first Adam Ruins Everything sketches that eventually spun off into the TV show, Conover tackles a surprisingly fraught subject: engagement rings. He tracks the history of the engagement ring tradition (which, get this, is less than 100 years old and was an advertising ploy engineered by a diamond company). The end result, though? Knowledge doesn’t prevent you from looking like a cheapskate for not buying into the diamond ring industrial complex. And good luck getting your potentially betrothed on board with the no-ring idea just because you now know the history of the things.

So, ruining things is all very well and good, but it’s still near-impossible to change minds about deeply ingrained, emotional beliefs. This is partly why Conover and his writers held off on a gun control episode for so long. The execution needed to be perfect and, for better or worse, more balanced than just simply advocating for blanket bans.

“I was really proud of our guns episode that we did to kick this season off,” he says. “We had always said we wouldn’t do topics that are too divisive because we want to get people where they weren’t looking.”

“When you do an episode about a topic like guns, people are immediately like, ‘Oh, well, you better say what I want you to say or I’ll turn the TV off,’ you know? But we finally felt that after doing the show for four years, we felt we were able to approach an issue such that anybody in the country could watch it and be challenged by it and enjoy it.”

I felt a pang of shame, loathe as I was to watch an episode of television that matter-of-factly laid out several well-meaning and well-reasoned arguments about responsible gun ownership. There can be no true understanding, and no true research, without finding ways to at least appreciate a differing view, even when it comes to something as polarizing as guns.

Even the most well-intentioned of us still has prejudices, and Conover knows he’s not going to win everyone over. Many will still choose to ignore simple facts if it makes their lives easier. How do you collect and drop all this knowledge, I ask him, without despairing at how little of it is destined to reach people and change their minds and actions?

“I think it’s more despairing to not talk about these things, right?” he tells me. “Talking about them is how I work my way through them. We’ve done two episodes that are broadly on environmental topics. One called ‘Adam Ruins Going Green’ and one called ‘Adam Ruins Nature,’ and those are very important episodes to me because those are issues that I care very deeply about. Those are the ones that I’m closest to.”

“‘Adam Ruins Going Green’ is about the inevitability of climate change. Seriously, this really doesn’t seem like something that we can stop or that we have the tools to stop in the way that we want to. What do we do?!”

“We talked with this professor, this climate thinker, Dale Jamieson. Reading his book and talking to him really helped me understand the problem in a deeper way that sort of alleviated my anxiety about it, which is that even if climate change is inevitable on some level, that doesn’t mean that we should stop trying to alleviate it now, because we always have a choice today to make a better tomorrow. So when people say, ‘It’s too late,’ it’s never too late; that’s false. It will always be false.”

The natural world, Conover says, has irrevocably changed, and there needs to be a ground-up rethinking of how we even perceive nature, let alone act on it.

" You can’t shrink away from those topics. You have to think your way through it."

“There is no natural world anymore. Humans have changed every inch of the world on a fundamental level, and every corner of the globe is affected by humanity. Pure, pristine nature doesn’t exist anymore. What does that mean? What does that mean for us? What do we do with that? Having those conversations, that was me working through that anxiety myself, and by doing that, we were able to alleviate it. You can’t shrink away from those topics. You have to think your way through it. You have to actually ask yourself the questions if you have any hope of answering.”

Before I let Adam go to record an episode of The Joe Rogan Experience, which he hopes will help him reach a heretofore untapped audience, I ask him this: Even with the unlimited resources of the internet at my disposal, it’s near-impossible to cut through the noise and even begin to figure out which questions to ask, and where to get those answers. Google any disease, for instance, and you’ll often be redirected to a website resembling something like “doctorbro.xyz” that could say literally anything. Where do we go for real information, real studies, I ask him.

"Go back to basics rather than be on Twitter all the time."

“First off,” he tells me, his voice more serious than it has been at any other point during our talk. “Go back to basics rather than be on Twitter all the time.” Fair, I say, but unrealistic. What else?

“I try to find sites and sources that I really like and just bookmark them. Like, there’s a wonderful website called Aeon that publishes really awesome articles by academics. It has really great ideas on it. It’s not inflammatory; it’s really thoughtful stuff. I learn about interesting people and interesting ideas by reading it, for example.”

For those of us who remember a pre-2010 internet, RSS feeds are still your friend, Adam says. “I use an old-fashioned RSS reader, and I find good sources of information like that.That’s what I try to refresh during the day other than Twitter. But I try to curate my internet information pipeline a little bit better.”

The most important thing you can do to get smarter? Adam is unequivocal. “Go to libraries. The amount of information that we’re subjected to every day in every corner of our lives … if you just respond to the articles and information that people are trying to pump into your face, that someone is actively trying to pump into your eyeballs, well, that’s a very limited type of information And so you can end up having a distorted view of reality because you’re only getting that perspective that’s very ‘Right now, I just wrote this. Please read my article very quickly so I can get my Chartbeat numbers up.’”

“There is such a thing as a healthier, slower, longer-term development of information and ideas, and those are coming out in books and in other forms. In the last couple years, I’ve really rediscovered the public library. A lot of people don’t realize that public libraries are very sophisticated digitally now. I use an app called Libby that allows you to download pretty much any book or audio book and do that without actually going to the library. I’ve literally started going back to the library and browsing the stacks. That is seriously the best way to get information, to broaden your horizons, because you come across information serendipitously.”

Adam Conover is the host of Adam Ruins Everything. Seasons 1 and 2 are on Netflix. Seasons 3-5 are on truTV and available for purchase on iTunes and Amazon. Conover is a member of the Inverse Future 50.