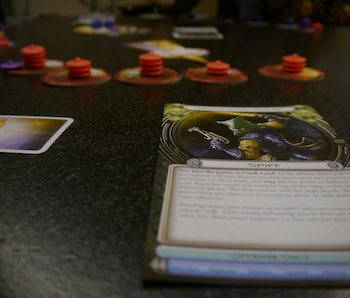 The galaxy-conquering board game Cosmic Encounter goes down easy, in deep breaths and great gulps, like fresh squeezed juice or very old scotch. It’s got a lot of flavor and a kick on the tail end if you know what you’re doing. It is an ancient thing by modern board game standards — it influenced Magic: The Gathering, not vice versa — but in its 40 years it has never owned the spotlight. Cosmic Encounter has gone in and out of print and in and out of fashion (though never very in). It’s in print now and, if all goes well, the board game boom will get the audience it deserves and keep it that way.

Cosmic Encounter’s rules invite comparisons to poker, which is fair. The mechanics are simple: You, leader of an alien race, want to colonize planets belonging to your alien opponents. You must rely on your wits, bluffing skills, and a sweaty grip full of cards, most of which have numbers on them. To win a colony, you must first commit one to four UFO chips to the cause. Then, one of two things happen:

1) You try to play a higher card than your opponent 2) You negotiate for a mutually beneficial exchange. If you see that your opponent has committed too few UFOs, perhaps you’ll try to pawn off a crappy low-value card — unless your opponent knows that’s what you’ll do, and has baited you into a mental battle that could have been stolen from Princess Bride.

If that sounds simple — and it should — that’s because it is. (You don’t even get to pick who you’re attacking on a given turn, as the game takes care of that for you.) But this simplicity allows Cosmic Encounter to withstand a rule-breaking maw that slobbers over the game’s mechanics like a pitbull to rawhide. See, you’re also assigned one of 50 alien powers, which can be kooky or overpowered or dull, but mostly kooky and overpowered.

Cosmic Encounter’s alien powers never met a rule they didn’t want to bludgeon, or swindle, or ingest and dissolve in gastric juices over a thousand years. There’s the Miser, who gets a bonus hand of cards to sift through at a whim; the (Spaceman) Spiff, who turns overwhelming enemy forces into a bonus; or the Loser, who wins when it loses and loses when it wins. The aliens are silly, but the game invites you to submit to their silliness like a warm bath. Plus, as a novice, you really shouldn’t worry about which power you are or if the game is balanced — trust that most are ludicrously overpowered and that if you start to get too far ahead, everyone else will turn on you, anyway.

The playthroughs, per the rulebook, should ease you in, using less-complex alien powers off the bat and omitting the flare cards. (Flares are like reusable, mini-powers that crack the game every so often rather than shatter it. Try to add them in as soon you’re as comfortable.) Tips we’ve gleaned: Don’t worry too much about the alien races — they’re important, but hewing too closely to your species’ power is a trap; Save your fattest numbers for a winning strike, when the table has turned against you; Don’t forget to recover a ship at the beginning of each encounter, and that you get a bonus encounter each turn if you’re successful after the first go; Finally, get a rough idea of the distribution of cards — there are a lot of fours and sixes and 10s, but only one 40.

Also, laugh. It can be a dumb and silly game, but it is also a good one.