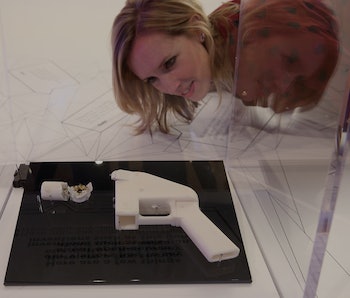 Anyone with internet access and a penchant for destructive DIY can download blueprints and 3D-print a plastic gun. And the National Rifle Association is doing everything it can to protect the internet’s stereolithographic armories. As politicians like New York Congressman Steve Israel have begun arguing for regulation, they’ve failed to find a debate. There is no 3D-printed gun regulation and the NRA has evinced no interest in changing that.

To be fair, 3D-printed guns present newer and fewer problems than traditional weapons. This is because there aren’t very many of them. But that number is changing and there’s no reason to believe that critical density won’t lead to critical injuries. Self-assembled guns were already used in the 2013 Santa Monica mass shooting. The threat of plastic guns being 3D-printed into the wrong hands is a serious one, one that only heightened firearms restrictions, not internet censorship, seems likely to diminish.

To give a sense of how hard it is to fight the 3D gun regulation battle while also fighting for stricter regulation on traditional firearms, note that President Obama’s executive action on guns, which demands stricter regulation of vendors and more stringent background checks, doesn’t extend its reach to homemade weaponry.

Currently, the laws against surreptitiously transported guns only apply to metal weapons. In 2013, the NRA voiced its opposition to Congressman Israel’s attempt to amend the Undetectable Firearms Act, which rules that a gun has to be as detectable as a 3.7-ounce gun-shaped piece of steel referred to as a “security exemplar.” Israel’s proposed amendment attempted to address the fact that relying on metal detectors to find firearms in, say, airport security lines wasn’t helpful in identifying plastic, 3D-printed weapons. He proposed expanding the rules to prohibit the manufacture of guns that can’t be detected by standard metal-detecting equipment, including those with removable metal parts, like Defense Distributed’s controversial Liberator. In a sense, he proposed that gun laws be applied to guns.

This, of course, pissed off the NRA, prompting them to issue a statement strongly opposing — caps lock included — “ANY expansion” of the act. “We will continue to aggressively fight any expansion of the UFA or any other proposal that would infringe on our Second Amendment rights,” it continued. The Association was quietly asserting a new right: The right to print guns.

Israel’s initial failure hasn’t stopped him from trying again, this time expanding his proposed prohibition umbrella to include all weapons and their major components that could pass through a metal detector unnoticed. He’s not alone in his efforts, either; early last year, fellow House Democrat Mike Honda of California also introduced an act calling to regulate DIY guns and purchased guns equally.

Still, given that Congress is currently Republican, an amendment is unlikely to hit the books in the near future. Before that happens, Americans’ right to print plastic guns and carry them will remain enshrined in our laws — if not in the Bill of Rights.