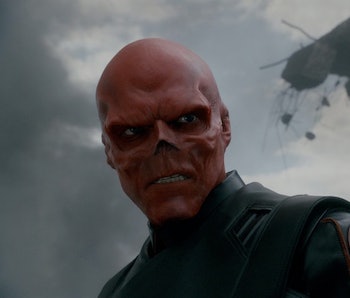 The media has long supposed that Nazi Germany was informed by a fascination with the occult. Perhaps in an attempt to make sense of the atrocities performed by Hitler’s underlings, historians began trying to find links between Nazism and larger, older conceptions of evil as news of what the Third Reich had wrought unfolded. In 1960, Louis Pauwels and Jacques Bergier published The Morning of the Magicians, a book which sought to prove Nazism had been preceded by a long history of prophecies, alchemy, and the belief in an ancient, pure race.

In 1973, Trevor Ravenscroft published Spear of Destiny, arguing that Hitler’s primary objective had been to find and control a spear powered by the Antichrist, specifically the spear that pierced Jesus’ side while he was hanging on a cross. According to Ravenscroft’s book, Hitler committed suicide upon losing the spear, which was then turned over to U.S. General Patton, who later died in a car collision (assumedly after losing the spear himself).

Sources close to Hitler seemed to confirm, for a long time, that he may have had an interest in supernatural power. Hermann Rauschning, a man who allegedly had several conversations with Hitler while he worked within the Nazi party, wrote several books on the subject. In Hitler Speaks, his memoir, he asserted that Hitler may have been possessed by a demon.

In the documentary Hitler and the Occult, the National Geographic Channel analyzed the personal interests and hobbies of many men who worked under Hitler, discovering that several of them had lifelong obsessions with tarot cards, communicating with ghosts and turning to mediums and psychics for advice on military tactics. Even if Hitler himself didn’t convene with a psychic, it’s safe to say a large part of the Nazi regime was informed by tea leaves and crystals.

Though not all of the sources linking Nazism to the occult are considered sound by contemporary critics, our cultural fascination with what compelled the Third Reich has not ceased. We’ve even weaved Nazi Germany into our modern stories of good and evil, including the Marvel Cinematic Universe.

Way back in the early onslaught of the MCU, Captain America: The First Avenger dramatized what would have happened if Nazi Germany had discovered supernatural power. In Captain America, Hydra is born of the Third Reich and powered by what that film called the Tesseract. You might remember this blue stone as being briefly controlled by Loki and used to brainwash Hawkeye. Marvel fanatics know the Tesseract to be the Space stone, one of the stones that will eventually power up the infinity gauntlet in The Avengers: Infinity War Parts I and II.

Captain America received some criticism for removing the more shocking aspects of Nazism from the baddies in the film. In fact, the film never actually called the uniformed soldiers bent on a cleansing of the world “nazis”, but instead just members of “Hydra”. In the comics, of course, Hydra is a group of Nazi extremists who choose to follow Red Skull rather than Adolf Hitler, as Red Skull has access to the Tesseract.

The link between the paranormal and Nazi philosophy is also present in Amazon’s The Man in the High Castle, which is based on a Philip K. Dick novel of the same title. Dick’s original novel presupposed a world in which the Third Reich won WWII, splitting the United States with Japan as the spoils of war. In the novel, a book titled The Grasshopper Lies Heavy is traded between revolutionaries and former Americans, who are inspired by its fictional depiction of a world where Hitler lost the war. It’s notable, though, that the Grasshopper book doesn’t tell the story of our reality, but instead a different, third reality in which the Allies won.

Amazon enhanced the science fiction aspect of the High Castle story, however, making the precious cargo not a propaganda book but film reels actually transported from an alternate reality. In the Amazon show, the Nazis are fully aware of the existence of these trippy film reels, and are hell-bent on retrieving and destroying them. This suggests that the Nazi party in High Castle (the television show) know that Hitler took power thanks to a supernatural influence, and that he could lose it just as easily if yet another otherworldly presence intervened.

As the reigning age of the Third Reich moves further into history, our contemporary media may continue to explain WWII with a science-fiction-influenced or mystical bent. Though science fiction can have a profound effect on societal analysis, and though the genre can be a useful tool in drawing comparisons between history and the future, insisting that Hitler’s rise to power was bolstered by supernatural influence is dangerous. Though his second in command, and third and fourth and fifth, may have been obsessed with the occult, we should be wary of saying simply that the “devil made him do it.”