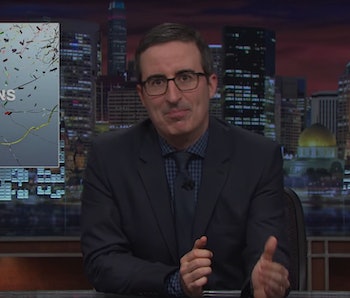 John Oliver has once again provided some web-exclusive content to tide us over until the third season of Last Week Tonight debuts in February.

Prior to Christmas, Oliver prepared us for the upcoming disappointment in receiving bad presents by teaching us the ways of re-gifting. Now, he’s helping us cope with more personal disappointment: being unable to fulfill our New Year’s resolutions. His solution for tricking ourselves into success, however, misses the true aim of “winning” your resolutions.

As with his regifting segment, Oliver moves out of journalist mode that brought insightful episodes about terrorist attacks, elections, and more. His sage wisdom, when it comes to having fulfilling resolutions, is to basically lie to yourself.

He takes on the most popular resolution: exercise. But instead of going to the gym — which he says is “like reading for your muscles” — he suggests you revise that goal to counting “anything that brings your heart rate up” as exercise. So you win if you take a pregnancy test!

Unfortunately, Oliver’s shockingly! got it all wrong. Success does not come with revision. Success comes with incredibly, inexplicably low expectations. “Exercising,” as he confirms, is hard. Very hard. But you know what’s not hard? Hitting your snooze alarm just once a week. Maybe it takes January — and February — to get down from three times a week to two. But by March, you’re a pro at showing up late only sometimes. And May? Everyone in your office — even Janice in Accounting — will be like, “Shit, dawg, you get here, like, less than 10 minutes late constantly.” There’s still a sense of accomplishment, but you didn’t really have to do much. At all.

Oliver goofs on himself toward the segment’s end. He suggests that instead of revising, you could also shoot for the moon. For instance, you could throw out the first pitch at a Yankees game on July 4. It’s never, ever going to happen — unless you somehow save the world from aliens in the next six months — so there’s no logical way to be upset about failure. But, sorry, John, we’re actually trying to succeed in 2016. We’re not throwing out that first pitch. But, I promise you this: We will check the box score for that game on July 5.

More like this
Mind and Body
Jan. 30, 2023
Does the Best Workout Exist? Exercise Scientists All Agree on One Thing
By Katie MacBride
Mind and Body
20 hours ago
Researchers find similar brain pattern shifts in two common conditions
By Miriam Fauzia
Mind and Body
Feb. 3, 2023
Why It’s Finally Time To Stop Obsessing Over Counting Steps For Health
By Claire Maldarelli
LEARN SOMETHING NEW EVERY DAY.
Share: