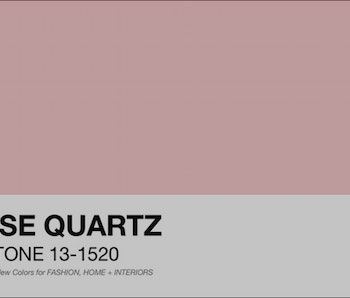 Earlier this month, Pantone announced the two colors that it predicts will define 2016: a pale pink and a light blue that they’ve christened Rose Quartz and Serenity. But here’s the thing about rose quartz: Geologically speaking, it’s just an impure form of regular, colorless, quartz. The impurities that give it that haute-couture-worthy pinkish hue? Titanium. The real color of the year? Titanium.

Here’s how geology created a trend.

Quartz is one of the planet’s most abundant minerals. It’s composed of crystals of silicon dioxide that form deep within the earth’s crust. It starts out as pools granitic magma — molten rock that contains the necessary ingredients for quartz crystals. The magma pushes out towards the surface of the earth, because it is less dense than the planet’s crust. Finger-like pegmatites push through weak spots and gaps, and as the magma cools crystals of quartz begin to build.

Pure crystals of silicon dioxide are colorless and can be transparent or translucent. Impure quartz can take on a rainbow of colors, and goes by many names. Amethyst is just purple quartz. Citrine is orange or yellow. Rose quartz, milky quartz, and smoky quartz are self-explanatory.

Titanium is most frequently associated with rose quartz’s pinkishness, although iron and manganese have also been implicated.

Pantone should have properly named 2016 the year of silicon-dioxide-impregnated-by-metal-impurities. A rose quartz by any other name would look as sweet.