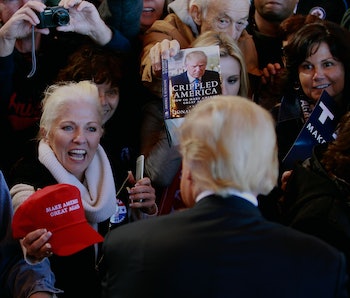 As we finally enter the election year, exasperation is high. (Guys, can you believe we’re only 10 months away?) Email leaks, Islamophobia, Ted Cruz saying things: blah blah blah. But why pay attention to actual policy positions when we can judge the candidates by the crap they sell on their website? Here’s the most creative swag the 2016 presidential candidates have on offer.

Hill’s going for broke on the self deprecation and tongue-in-cheek angles. “I’m really fun” she’s screaming with these: a Chillary Clinton koozie, pantsuit t-shirt, and feminist throw pillow. If she keeps it up, I might just buy what she’s selling.

The former governor has nothing interesting for sale on his site which — if you’ve heard him speak — kinda makes sense.

“Feel the Bern” is a pretty killer campaign tag, so it’s not too surprising that Sanders is selling a reasonably funny coffee mug emblazoned with “Caution: Contents May Cause Serious Bern.” He’s also got some decent tote bags, too. My favorite is the “schlep bag,” a shout-out to Bernie’s Jewish roots.

The best idea anyone over at Trump camp had was selling an authorized version of his absurd “Make America Great Again” cap. Which is to say, his store is way more boring than the crazy shit that comes out of his mouth.

Ever since Trump called Cruz a “maniac,” Cruz has owned it. Now, he’s even selling a “Maniacs for Cruz” shirt. It’s all a bit more troubling than innovative, but those lines are greying in this election. Also, check out this bananas football jersey. Wow.

Carson is selling a scrub top. Not sure if you guys knew this, but he used to be a pediatric neurosurgeon.

Okay, so, Jeb is offering a bowl for making guacamole. Best to let the site explain:

Jeb and Columba love whipping up guacamole on Sunday Funday. Now, you can get in on the act with this “Guaca Bowle.” Jeb’s secret guacamole recipe not included…yet.

There are so many weird things going on here it’s hard to focus on just one. Clearly he’s playing on his wife’s heritage, but the bowl is just like any other one you could buy on Amazon or elsewhere. It doesn’t have “Jeb!” anywhere on it and, also, it’s $75. Plus, where’s the pestle?! That’s innovative, all right.

After clicking past a giant gun plastered over the United States, you’ll find this gem: “Buy Marco a Plane Ticket”. Yup, that’s right: You can pay for Rubio to fly somewhere on his campaign. Also, he’s charging $500 and it looks like he flies Southwest so, apparently, he’ll be ordering a lot of gin and tonics with the extra cash.

Paul might have the best store of any candidate. He’s got a Hillary hard-drive and a NSA spy cam blocker. He’s got a cutting sense of humor plus he’s paranoid? More like “Stand-up with Rand”!

Chris Christie doesn’t have an online store. There are way too many Republican presidential candidates.

Carly has some stickers. Lame.

Huckabee is a crazy person, so it’s pretty disappointing he doesn’t have any crazy things for sale in his store.

The Ohio gov is rocking this mind-blowing sticker, which features the slogan “John Kasich Will Chop Down Our Debt” and a karate chopping hand. Whoosh. Can’t make shit like that up.

More like this
Innovation
8.5.2022 11:00 AM
Alexa could diagnose Alzheimer’s and other brain conditions — should it?
By Joanna Thompson
Innovation
7.29.2022 2:00 PM
Amazon's new invention could let you “speak” to the dead — but should it?
By Sofia Quaglia
Innovation
12 hours ago
Scientists at CERN have discovered too many particles for physics to keep up
By Harry Cliff, Tim Gershon and The Conversation
Share: