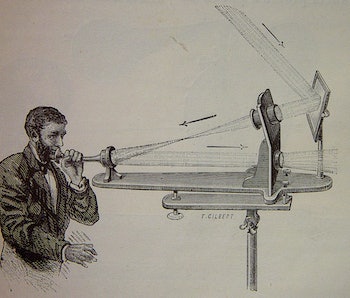 A mere four years after patenting the telephone, inventor Alexander Graham Bell was already looking for ways to improve on his new technology. Specifically, he wanted to go wireless. Functionally, wires limited the use of Bell’s invention: The major example of this, ships at sea, would benefit immensely from telephone technology, but obviously they couldn’t be tethered together by wires. Bell famously predicted that “the day is coming when telegraph wires will be laid on to houses just like water or gas,” but he didn’t totally embrace his own vision. He realized that cities swallowed by webs of thick black wires might be ugly cities.

On his honeymoon, Bell read about fellow scientist and inventor Robert Sabine’s experiments with Selenium, a newly discovered material that reacted to exposure to light. In Sabine’s experiment he was able to visually measure the changes in light hitting a Selenium receiver. Bell theorized that if Selenium’s reactions to changes in light were substantial enough to physically measure reactions, then there was a chance beaming modulated sunlight into a Selenium receiver could produce an audio effect; theoretically, he could hear what Sabine saw.

In order to accomplish this, Bell would have to modulate sound waves like electricity. The telephone transmitted sound through the modulated electrical current sent through telegraph wires. The Selenium receiver would then act like an optic version of the electric coil in a telephone receiver, converting the modulated light back into sound waves.

Sure enough, Bell was absolutely correct. In February of 1880, using nothing more than a diaphragm attached to metal grating and a rudimentary selenium receiver, Bell listened as assistant Charles Sumner Tainter’s a cappella version of Auld Lang Syne came blaring through his headphones, transmitted through a single beam of sunlight.

Over the next few months, Bell and Tainter improved upon the design of the photophone, replacing the steel gratings with a thin, flexible mirror that would bend and vibrate from the sound waves, altering the light, yet creating a more concentrated beam of light capable of being received from greater distances. While the first test transmitted sound across the same room, subsequent tests using a parabolic mirror receiver reached distances of around 700 ft. 19 years before the first radio transmission. Bell had introduced wireless audio communication to the world.

Bell was ecstatic. He believed that once technology caught up, transmitting sound through light would one day revolutionize the world of communication. However, while the photophone was a success conceptually, Bell — ever the pragmatist — knew the technology needed to make his invention practical for day-to-day use was still generations away.

The biggest and most obvious problem with relying on sunlight to transmit sound is that the sun isn’t constantly visible: Night transmissions would be impossible, and rain would shut down communication. Light diffuses over distance, which meant without a highly concentrated beam, even in optimal conditions, there was a rather short and finite limit to the range to the photophone.

There was also this: Edison had just invented the 16-watt lightbulb. Gas lights were still common place, and even though it was possible to create highly concentrated beams of artificial light with mirrors and glass, any home using a photophone would have to be a literal lighthouse. Bell sold the patent for the photophone to the National Bell Telephone Company, of which his father-in-law and wife were the principal shareholders (after Bell gave away his interest in the company as a wedding gift). Bell himself backed out of developing the photophone, but other engineers at Bell Telephone Company continued to improve upon the technology for the next few decades.

In an interview right before his death, Bell proclaimed, “In the importance of the principles involved, I regard the photophone as the greatest invention I have ever made; greater than the telephone.” Arguably, he was right again: Light telephony would indeed change the way the world communicated, but not quite the way Bell envisioned. Upgraded versions of the photophone were successfully used in maritime capacities, especially during the First and Second World Wars; light telephony, unlike radio waves, proved to be almost impossible to intercept. In the first part of the 20th century, modified versions of the photophone were used by European shipping companies as a backup in situations where radio waves were disrupted.

Ironically, wires were the missing ingredient to Bell’s light telephony conundrum all along. It turns out the most efficient way to transmit highly-concentrated modulated light long distances is through incredibly long, ultra-slim glass wires. The most important manifestation of Bell’s wireless principles was fiber optics, which are used to transmit phone, cable, and internet data all over the world using the same general principles of light telephony as Bell’s original photophone.

More like this
Innovation
Sep. 21, 2022
Look: Drones could be the future of 3D-printed architecture
By Jennifer Walter
Culture
15 hours ago
8 thrilling sci-fi movies and shows new on HBO Max and Netflix in October 2022
By Robin Bea
Culture
Sep. 26, 2022
House of the Dragon cast change: That confusing time jump, explained
By Robin Bea
Share: