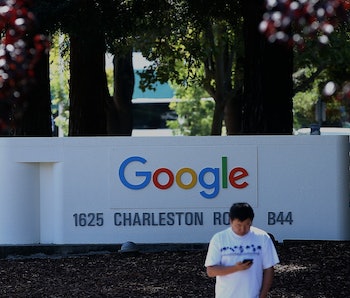 Google doesn’t mind failure. If, after toiling over 10 outlandish projects, only one of those projects succeeds, it’s a win. And so goes the history of Google’s chat and messaging projects. Remember (or maybe you still use) Google Talk, Google+ Messenger, Android’s SMS app, and Google Voice. With the advent of Google Hangouts, Google downsized.

A new report in the Wall Street Journal, announces that Google is looking to add a competitor. Their own competitor. A new chat and/or messaging app that incorporates a powerful AI system. If the new app wins, great; if Hangouts wins — no, no, Hangouts will not win.

We’ve seen this before, from Google. Right now, there are two Gmail apps: boring, old Gmail and the fresh, new Inbox. Eventually, one will live and one will die. (A betting man would place his chips on Inbox.) There was also both Android and the Chrome OS. Both of those ventures wound up successful, which never hurts. The Google double-down is intertwined with who they are, as a company, and is consistent enough that it seems to be a reliable strategy.

Last year, rumors circulated that Google was pursuing a Whatsapp competitor after losing the bidding war to Facebook. This new project may be that. The new messaging app may turn out like all of Google’s previous communicatory experiments. Then again, it may be a grand slam. Our betting man might favor the latter possibility.

Here’s why: The new Google messaging app will purportedly incorporate a chatbot. But not just any old chatbot — a Google chatbot.

Remember GOOG-411 (2007-2010)? It was Google via telephone, and you may have used it once or twice in 2008 as, like, a party trick. This chatbot will be like GOOG-411, but will be a comparative genius. Already, Google’s AI-helper is leaving poor Siri in the dust. (How many times have you heard her lament: “I’m sorry — I didn’t understand your question.”) The Google search app can already understand and respond to complex, multifaceted questions, and it’s ever-improving the service. Two examples: “What was the U.S. population when Bernie Sanders was born?” and “What are some of Seth Gabel’s father-in-law’s movies?”

So, this chatbot will be a part of your group text when you want it to be. Slack and other services already offer versions of this omnipresent and benevolent AI, but they tend to be clunky and, basically, unintelligent. You and your friends will be able to reach out to Google’s as-yet nameless hero/heroine and have the answers to your deepest curiosities revealed. (Okay, maybe it won’t be quite that good.)

Until the release, the jury will remain out on whether this Google venture will be a hit or a miss. But, if they can find a way to encapsulate projects like Google Fi, Inbox, and the Google search app, our betting man may just get lucky.

More like this
Innovation
8.5.2022 11:00 AM
Alexa could diagnose Alzheimer’s and other brain conditions — should it?
By Joanna Thompson
Science
7.23.2022 11:00 AM
Astronomers have an ambitious plan to discover the first light in the universe
By Kiona Smith
Innovation
7.29.2022 2:00 PM
Amazon's new invention could let you “speak” to the dead — but should it?
By Sofia Quaglia
Related Tags
Share: