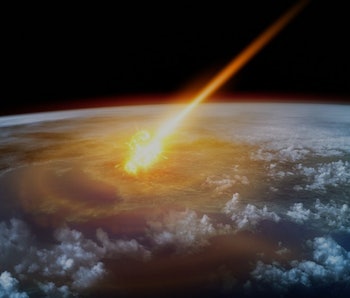 The hundreds of giant comets that lie within the outer planetary region of the solar system pose a much deeper threat to life on Earth than do asteroids, a team of British astronomers reported Tuesday.

In the article “Centaurs as a hazard to civilization,” posted in the December journal of the Royal Astronomical Society, space researchers from the University of Buckingham, England and Armagh Observatory in Northern Ireland stated that such giant comets — known as “centaurs” — move in unstable orbits that cross the paths of Neptune, Uranus, Saturn, and Jupiter, planets whose gravity could potentially ricochet these comets toward Earth.

The giant objects are generally 30-60 miles in length (average comet nucleus is usually less than six miles across), and each can contain more total mass than all of the asteroids that regularly cross Earth’s orbit put together.

Professor Mark E. Bailey of Armagh Observatory (and co-author of the “Centaurs” research paper) tells Inverse, “There are now hundreds of these objects known, and from time to time (at least once every 100,000 years) one or another will be deflected onto an orbit that crosses those of the inner planets including the Earth, bringing it much closer to the Sun.”

Although expectations are that such an object would break up into dust and fragments, those bits could still saturate the inner solar system with cometary remains—some of which would likely make impact our way. Dr. Bailey describes the situation:

“The large-scale ejection of dust, the possible fragmentation of the large object and the associated production of trails or streams of debris in the inner solar system, will produce a temporary but much more hazardous environment for the Earth and its human population than that of the background population of interplanetary dust, meteoroids and near-Earth asteroids with which we are familiar.”

Have such events already taken place in the past? The astronomers speculate that mass extinctions and “specific episodes of environmental upheaval…identified by geologists and paleontologists, are also consistent with this new understanding of cometary populations.” A more physical finding has been associated with lunar rocks brought back during the Apollo program, with samples that reportedly feature miniscule impact craters younger than 30,000 years, which could indicate the prior appearance of a heavy influx of damaging particles in the inner Solar System.

Bailey feels the danger of centaurs needs a closer look:

“The injection rate of large centaurs from the outer planetary system into the region of the terrestrial planets is comparable with the mean time interval between collisions of a kilometre-sized asteroid with the Earth, and so the full range of the effects of the ‘centaur hazard’, intermittent and more complex as it is compared with the impact of a random asteroid, needs to be investigated more fully in order to understand the long-term effects on the Earth of its time-variable near-space environment.”