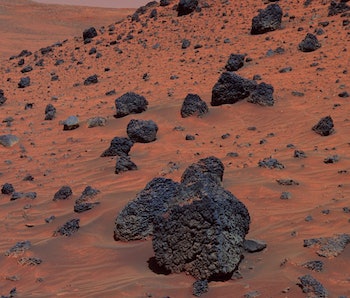 On Tuesday afternoon, NASA announced that it was suspending the March 2016 launch of its InSight mission to Mars. The lander of the probe had a structural leak in a critical instrument that’s part of the science payload.

The InSight (Interior Exploration using Seismic Investigations Geodesy and Heat Transport) mission has been an important part of NASA’s plans to study the interior geology and mineral composition below the Martian surface. The instrument in question was a seismometer designed to measure ground movements by as little as one atom in diameter. In order to get something like that to work, you need to vacuum seal its multiple sensors as a protective barrier against the red planet’s harsh climate.

Unfortunately, NASA engineers were basically unable to keep the vacuum seal from leaking. A previous leak earlier this year was repaired, but seems to have broke apart during a test on Monday involving temperatures at -49 degrees Fahrenheit.

There’s not enough time to repair the leak before the March launch date — or any other date in all of 2016.

“The bottom line is that we’re not ready to launch in the 2016 window.”

“Learning about the interior structure of Mars has been a high priority objective for planetary scientists since the Viking era,” said John Grunsfeld, associate administrator for NASA’s Science Mission Directorate in Washington, in a statement about the postponement. “We push the boundaries of space technology with our missions to enable science, but space exploration is unforgiving, and the bottom line is that we’re not ready to launch in the 2016 window.

“A decision on a path forward will be made in the coming months, but one thing is clear: NASA remains fully committed to the scientific discovery and exploration of Mars.”

The setback comes at a time when NASA is beginning to ramp up the exploration of Mars in anticipation for getting astronauts on the surface before 2040. While the InSight mission was meant to be focused on scientific study, the data gathered by the lander would have undoubtedly helped provide NASA with information that could be used to help plan for infrastructure that will probably be established before humans even set foot on the ground.

NASA’s ultimate goal, after all, is to get a permanent outpost ready on Mars, so that scientific study and exploration could happen without interruptions.

Thankfully, plans are still on track for the upcoming launch of the Mars 2020 rover, as well as the ESA’s 2016 and 2018 ExoMars missions to study Martian astrobiology (i.e. find out whether life once existed on Mars — or perhaps still does).

More like this
Innovation
8.13.2022 3:00 PM
Mars City: 3 Red Planet resources could forge a critical building material
By CAROLYN COLLINS PETERSEN and Universe Today
Science
8.5.2022 12:15 PM
10 years ago, the Curiosity rover arrived on Mars — and revolutionized the hunt for alien life
By Allie Hutchison
Science
8.17.2022 6:09 PM
Behold! NASA’s Artemis I is on the launch pad, ready for the Moon
By Allison Parshall
Related Tags
Share: