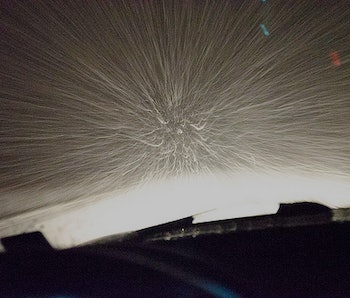 If you’ve ever been caught driving through a snow storm, especially in the middle of the night with your high beams on, you’ve probably thought: “This looks familiar. Punch it Chewie.” That’s because Hyperdrive and a whiteout are pretty much the same from behind the wheel (or stick).

There’s a pretty simple explanation for how this works, and it has to do with the physics of moving forward into falling snow, and the optical effects of light bouncing off frozen water.

First, a quick primer on the motion of a car. Motor vehicles are designed to move through the air aerodynamically — they are designed with curves in order to decrease the amount of drag created at high speeds. If you’re driving a well-designed car, the air is constantly curving around its body, which why, if you’ve ever driven through rain, you’ll notice that while the front is taking a beating, the back looks almost completely dry. The air in the front of a moving car is basically changing direction and traveling upward — this causes rain that’s failing to change direction slightly as well, creating an illusion that the rain is actually blowing straight against the car. Meanwhile, in the back, the air flow carries the falling droplets away from the glass by a tiny bit.

Snowflakes are much less dense than the rain, so they don’t fall down at high speeds — they glide down slow enough that you can track individual flakes with a naked eye. Because the flakes aren’t aerodynamic, the air flowing past the car is able to change their direction at even moderate speeds.

Then we get into the way light bounces off a snowflake. Snowflakes aren’t solid masses of ice or water — they’re intricate patterns of frozen crystals that have a hexagonal symmetry. Light that penetrates a snowflake doesn’t just reflect off the surface — it’s bent, or refracted, in a unique way that causes it to sparkle and glimmer. Most of the light actually bounces back towards the light source, and it bounces off so well that it can cause snow blindness when the sun is out and hitting large swaths of piled up snow on the ground.

If you’re driving around late at night and there are no other lights around in the vicinity, your headlights are the only thing that’s keeping the path in front of you lit up. The light from those headlights bounces directly back towards you, and you get to experience one hell of a light show. Rain, which redirects light rather than serving as a mirror, can’t offer this spectacle.

When you combine the light reflecting properties of snow, the shape of snow, and the shape of cars, you get the perfect recipe for hyperspace — streaks of light moving smoothly around a buffer of air moving in the opposite direction. It’s beautiful and it’s dangerous, which brings us to the final point: Unless you absolutely need to drive out in the snow late at night, do yourself a favor and experience hyperspace courtesy of your DVD player.

More like this
Science
Sep. 16, 2022
The science behind The Rings of Power's mesmerizing title credits
By Tara Yarlagadda
Science
Sep. 24, 2022
Is a fact always true? A philosopher explains how to spot the difference
By Peter Vickers and The Conversation
Science
14 hours ago
NASA Crew-5 launch: Timeline, how to watch this historic ISS mission
By Harry Stoltz
Related Tags
Share: