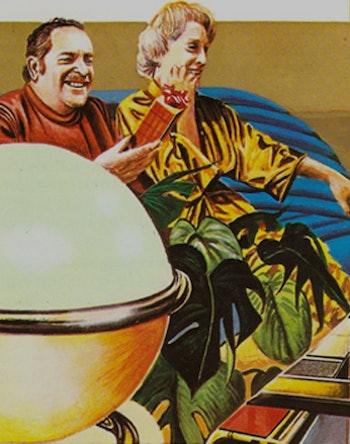 Space age pop as a musical genre has not aged particularly well, but for a while, it was how the future was supposed to sound. Back in the late ‘50s and early ‘60s, during the Space Race, musicians captured the sound of the unknown by infusing classical composition, Latin-American fusion, and an often-times bizarre mix of electronic distortions into a sound that would definitely take your mind off the Cold War. Actually, aside from the prospect of Mutual Assured Destruction, it was an optimistic enough time to be alive. The postwar economy was booming, tech was ascendant, and humanity was looking forward its first steps on the moon. Also called “bachelor pad music,” space age pop relied heavily on synthesizers and experimental electronics. In essence, composers of the space age were looking to the future and trying to predict what “real” popular music would sound like today.

As it turns out, most of these musical futurists predicted we’d really be into lounge music. Like really into lounge music. In a weird sort of way, space age pop was a response to the burgeoning rock ‘n’ roll movement; a genre of music filled with innovation, but at its heart a direct descendant of early jazz and Romantic-era composition. The cool kids of the future wouldn’t be seduced by sloppy electric guitar licks and unorganized noise. No, sir. The music of the future would adhere to highly structured, classical forms, albeit expressed through an incredibly unorthodox instrumentation and arrangement.

Foremost among these space pop composers was a Mexican bandleader and former child piano virtuoso named Juan García Esquivel. The artist soon to be known as Esquivel! (yes, exclamation point included) rebelled from classical music training, and instead was drawn to mashing up traditional Mexican standards with jazz, bebop, and perhaps what can best be described as an early form of super quirky electronica.

In the late ‘50s, Esquivel! started to play with production techniques in an attempt to push the limits of the new audio technologies available at the time, including hi-fi and quadraphonic sound. Esquivel gained a reputation as a pioneer and innovator of experimental studio recordings; he would often have multiple orchestras playing simultaneously from multiple locations and then using separation to alternate bass and treble from channel to channel on the fly.

Although the name Esquivel! is all but forgotten now, for the span of a decade or so, he was lounge lizard royalty. He spent the early ‘60s in Vegas, where he alternated between headlining on the strip and opening for Frank Sinatra. Even his live shows were ahead of their time: He normally performed with an array of singers, dancers, jugglers, and fire-eaters arranged in intricate, fully choreographed routines. Esquivel! was even an early adopter of laser-light-show style backdrops, making their shows a surreal mix of a rave-style performance set to what amounts to trippy acid-pop elevator music.

Mercifully, outside of a brief hipster revival in the mid-‘90s (think Vince Vaughn in Swingers), Esquivel! and his contemporaries’ predictions of pop music that relied heavy on xylophones, synthesized harpsichords, and theremins were a bit off. On the bright side, the short-lived space age pop resurgence brought us a remastered version of Esquivel!’s 1958 Christmas recordings, Merry Xmas From the Space-Age Bachelor Pad.

With covers of Christmas standards like “Frosty the Snowman,” “Santa Claus is Comin’ to Town,” and “White Christmas,” the Esquivel! Christmas jams are kitschy, kooky, and pretty fucking amazing if we’re being honest with ourselves. It’s exactly the kind of music you’d imagine would be playing if George and Judy Jetson invited Don and Betty Draper over for a Christmas pre-funk, without all the awkwardness of Don getting drunk and stumbling around sans-pants trying to catch Rosie under the mistletoe.

If you’re looking to channel your inner-hep-cat this Christmas season, (or you’re into that fifth egg nog and already replacing the traditional lyrics with a series of “Zus,” “Pows,” and “Zings” anyway) ditch the Johnny Mathis and Mannheim Steamroller and get into the swinging holiday sounds of Esquivel!!