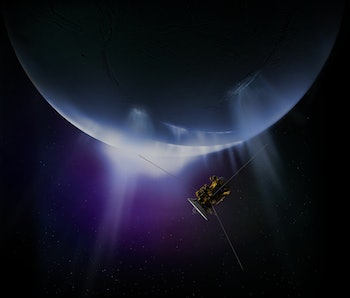 Oh, Cassini — you’re the gift that keeps on giving. The 18-year-old probe is on what is likely its final flyby of Enceladus, a moon of Saturn almost completely covered in an ocean of pure ice. The probe is currently scheduled to make its way past the moon on Saturday, December 19, at around 12:49 p.m., at just a little more than 3,000 miles away.

Cassini will be specially tasked with collecting data on how much heat is coming out of Enceladus’ interior core, in hopes that scientists can get a better understanding of what’s pushing up various sprays of gas and ice up toward the surface of the southern polar region. That region is currently in the midst of a long, dark winter.

Since the sun’s light will not be a factor in the measurements, scientists can finally get a glimpse of the warmth coming from Enceladus without any external interference. Within the past year, NASA confirmed the existence of a liquid ocean actually sitting under the surface of the south pole — potentially 10 kilometers (6.2 miles) deep.

Launched in 1997 by NASA, ESA, and ASI (the Italian Space Agency), Cassini has spent more than 11 years observing Saturn and its multitude of moons and other natural satellites. NASA released another batch of Enceladus images back in October. At the end of the month, the probe completed a risky dive through an erupting plume gushing from the moon’s surface.

It captured this image of Enceladus behind Saturn’s rings, released in late November:

And In December, NASA followed up by releasing another catalog of high-resolution close-ups of the small moon Prometheus.

Enceladus itself is an incredibly strange and exciting world. The icy surface reflects almost all of the sunlight that reaches it — the planet’s highs go up to a mere -198 degrees Celsius (-324.4 Fahrenheit). It’s a fraction of the Earth’s mass and size — with roughly 0.012 the amount of gravity. It’s safe to say the diminutive little dude is probably not habitable. But never say never. If we find out more about how the internal heat of the Enceladus works, we could be closer to understanding whether life could, in fact, survive in some strange way.

You can learn more about Cassini at NASA’s (adorable Christmas-themed) Cassini website. You can also follow the little ticker to see how much time is left before the spacecraft makes its flyby of Enceladus.