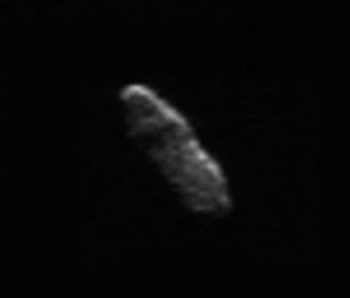 A mile-long asteroid will fly by Earth on Christmas Eve, visible for viewing—as long as Mother Nature keeps the skies properly clear.

If you’re lucky enough to score a telescope for the holidays—or if you’re already equipped with a skygazing apparatus—December 24 will be a good time to test your lenses as the 1.25-mile-long space rock designated as 2003 SD220 will pass by Earth at approximately 28 lunar distances (about 6.7 million miles)—not close enough to interrupt Santa’s flightpath, but within telescope range—the only other necessity are clear, cloudless skies.

According to NASA, SD220—also known as Asteroid 163899—has special value, as it’s on the space agency’s Near-Earth Object Human Space Flight Accessible Targets Study (NHATS) list of potential human-accessible targets which NASA describes as “objects that may be well-suited to future human space flight round trip rendezvous missions.” That said, it’s very likely NASA will also be looking at the asteroid as it passes, trying to ascertain the rock’s internal structure and density.

Then again, if the weather doesn’t cooperate, or you’ll be too (understandably) fixed watching the TCM A Christmas Story marathon, SD220 will fly by again sometime in 2018.