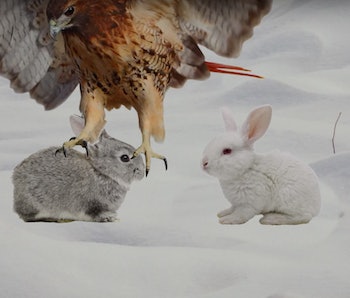 During this holiday season, the scientific community is sometimes hit with creationist theories, but a new PBS web series aims to inform hordes of internet clickers how the process of evolution works.

In 12 Days of Evolution, host Joe Hanson, intends to give viewers something of a scientific primer on how we became the complex species we are today — starting from the 19th century fieldwork and laboratories of Charles Darwin and Alfred Russell Wallace.

The first episode, uploaded on Monday to YouTube to PBS Digital Studios’ It’s OK to Be Smart channel, sets the scene for the series, chock-full of bunnies and an image of Darwin’s immense beard, which serves as a bird’s nest and an ocean for a sailing puppy.

It attempts to define biological evolution as it applies to all creatures great and small — adding that nature doesn’t always make survival easy (cue animation of a hawk scooping up a bunny) — and introduces the concept of natural selection in a cheery way that’s perfect to show your elementary school-aged cousin over the holidays:

“Centuries of nature has shown us that all life is related, and just how like how the physics here on Earth is the same physics that rules the Andromeda galaxy, the same biological rules apply to all creatures great and small,” Hanson says in the first episode.

The second episode of 12 Days of Evolution, uploaded today, aims to tackle whether or not evolution functions under a randomized premise:

It turns out, as we all learned in the sixth grade, that natural selection is anything but random.

Hanson explains, likening the growth of species to building a house:

Hanson comes off as a millennial Bill Nye, who maybe ditched the bow tie in favor of a flannel. He’s also a Ph.D.-toting scientist.

In any case, 12-Days of Evolution, which draws its name from one of the most jubilant Christmas songs, really seems to thumb its nose at the creationist in your extended family this holiday season. (It should also enable any precocious elementary school kid to master the basis of all animal life.)