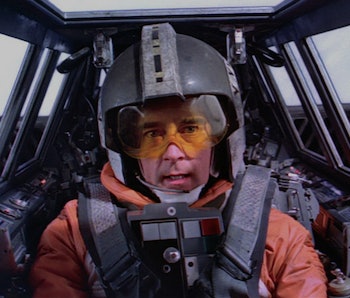 With the energy of scrappy old World War II dogfight footage and the lived-in look that typified George Lucas’ first Star Wars movies, A New Hope’s Battle of Yavin is probably the most satisfying conclusion of the entire saga (ignoring the ending of Return of the Jedi, basically the same thing with different people). Two [Rebel](http://starwars.wikia.com/wiki/RedSquadron(RebelAlliance) [squadrons](http://starwars.wikia.com/wiki/Gold_Squadron(Rebel_Alliance) make three separate runs in the deadly Death Star trench to achieve what is seemingly the easiest thing a fighter pilot could do: Shoot two missiles into a gaping, unguarded hole. Still, this gimme of a mission cost the lives of some good men just trying to make sure the Death Star didn’t get within firing range of the moon housing their precious Rebel base. Over the years, they haven’t gotten nearly enough recognition for their bravery and/or general incompetence, until now.

Excluding Luke (Red Five) and Han, who swoops in with the Millennium Falcon to hog the glory, here is the definitive ranking of the Rebel pilots who made the original Death Star run.

These guys were toast before they even began. Sure they have names and overly elaborate Expanded Universe backstories, but they aren’t known by much else onscreen other than their call numbers. Gold Squadron’s initial attempt was, like every other ill-fated front line during war time, probably doomed from the start. But these guys put their lives on the line just so Luke could become the convoluted hero, and we salute them for it.

Blame this guy for straight-up leading two other pilots on the first run in the Death Star trench to almost certain death. He’s cool, calm, and collected, using the targeting computers to try and get the job done. And where does that get him and his squad? Blown up, that’s what. His last words were screaming “Loosen up!” before burning up in a salvo of Empire laser shots. Maybe he should have taken those words to heart.

This poor bastard was just doing his job, but he tried to play favorites with Red Leader by covering him during his ill-fated attempt at blowing up the Death Star after Gold Squadron messed it all up. But what Theron Nett didn’t understand is that you can’t be a teacher’s pet — or in this case a squadron leader’s pet — when your objective is to destroy the Empire’s $852 quadrillion superweapon. Darth Vader and his cronies will find you and make you pay. Godspeed, Theron Nett.

This Rebel pilot had the sad distinction of being the fat X-Wing pilot named after a pig, and the pilot in the squadron that dies first. Despite what he tells the rest of the pilots, Porkins gets killed because he couldn’t get out of the way of the Empire’s lasers in time. He was too slow in real life and he was too slow in battle. This seems like lazy and derivative storytelling. We would’ve loved more Porkins.

In the original cut of Star Wars Biggs was a more prominent character, as seen in this infamous deleted scene of him and Luke whining about the Rebellion while at home on Tatooine. They later meet as equals while suiting up to battle the Empire before Biggs goes out in a blaze of uncertainty. Maybe getting cut out of the movie is what made Biggs so confused before he shuffled off this mortal coil all due to an intense laser blast straight from Darth Vader’s TIE fighter. We feel bad for the guy. He was Luke’s best bud and then Han Solo just waltzed in and took that distinction from him.

Props to Wedge for having Luke’s back in this battle from the get-go. Sure he could have been a jerk and questioned why this kid with absolutely no piloting experience whatsoever besides bullseyeing womp rats in his T-16 back home is suddenly given the keys to an X-Wing and told to help destroy the most powerful weapon in the universe. Wedge could have been jealous that Luke and Biggs were already old chums from Tatooine, but nah. Wedge didn’t care. He helped get the job done in both A New Hope and in Return of the Jedi, basically making him the most underrated character in the entire saga. This is a proper wingman in every sense.

Red Leader meets an unfortunate end but goes out in an epic way. Sure he can’t do something as easy as shoot locked-on missiles into a small hole, but he doesn’t let it bother him. It’s still sad because he goes out knowing it’s all over after losing his starboard engine. Without him Luke wouldn’t finish his hero’s journey by getting to pick up the slack and be like, “Oh shit, I’m gonna have to do this now, huh?”

But before we all go giving Luke the credit, remember he ultimately shuts off his targeting computer to blow up the Death Star causing this guy and Dutch Vander to die in vain. Both were dumb enough to trust in what we can only assume are the multi-million dollar (or, in Star Wars parlance: “credits”) technological advances that make sophisticated fighter ships able to make the Death Star go boom. What Luke teaches us is that nope, it’s all about instinct. Maybe he should have let Garven know that before they went headlong into the trenches.