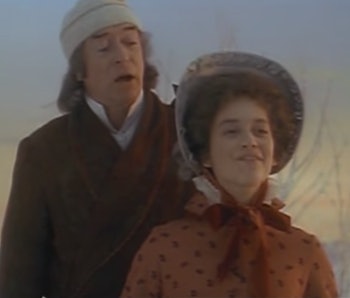 If you are someone in your 20s or early 30s who remembers The Muppet Christmas Carol from your youth, you may recall thinking one song stood out from the others. It might have been the one you found tedious — that is, if you had a tin ear for melody.

That was the love ballad that 20-something aspiring businessman Scrooge sings to his one and only love, Belle, “The Love is Gone,” during the Christmas Past section of the film. It’s something of an anomaly, as it is the one song in the film that does not involve, even in a background chorus capacity, any Muppets. The Ghost of Christmas Past shows this memory to old Scrooge (Michael Caine), who gets weepy remembering the days when he still had an ounce of warmth in his heart (and lo, here, it begins to be rekindled!)

That such an innocuous moment would cause veritable director-v.-studio tension seems implausible. And yet. Unsubstantiated reports indicate that it was Disney executive Jeffrey Katzenberg, specifically, who pulled this song from the actual theatrical cut of the film. Director Brian Henson (remember, this was the first Muppets film following creator and visionary Jim Henson’s passing) was horrified by this decision, and insisted it be reinstated for the VHS and Laserdisc release of the movie in 1993. This is the primary version to which a generation of first-wave millennial elementary schoolers were exposed; we got to hear “The Love Is Gone” as intended.

But those of us who have watched recent releases of the film know that Henson’s wishes were not honored much longer. Indeed, all digital widescreen versions of the film — both DVD editions, Blu-Ray and the version that has periodically streamed on Netflix Instant — do not feature “The Love is Gone.” The one exception is that the 20th anniversary DVD edition (not to be confused with the simultaneously release Blu-Ray) includes the song in the fullscreen version — that is, the same version from the original VHS — but not the widescreen version.

To some, this is a big deal. You can peruse numerous forums and comments sections (see video above), or join the Facebook group “Uncut Muppet Christmas Carol,” which was begun after the expanded 2012 20th anniversary Blu-ray release of the film included no cut of the film with the somber and tuneful ballad included.

You may roll your eyes at the notion that yanking this melodramatic but ultimately beautiful song is problematic. But from both the perspective of the film’s continuity and formal purity, it’s tremendously important. First of all, Michael Caine reprises the song in the final medley of the film as “The Love We Found” — in duet with Tiny Tim. It’s confusing in the cut version, seemingly cursorily introducing a whole new melody in the final moments of the film. The catharsis is gone, along with the love. Beyond aesthetics, from a pure plot standpoint cutting the song is a straight-up botch.

The contrast between old, reawakened Scrooge and the image the original song provides of young Scrooge’s first heartbreak is poignant and gives the film and score cohesion. To excise it is to assume that children are witless, living from laugh to laugh — one funny googly-eyed creature and accent to the other — without being invested in the characters in the film in any deeper way. It’s to assume that pre-pubescent children have no understanding of love, even though Belle and Scrooge’s love is clearly something deeper than love of the flesh.

Without the song, the audience also doesn’t get a grasp of Scrooge’s character at this time, and misses out on his true feelings for Belle. Cutting the song from the finished cinematic version is also just a technical mistake. The original DVD cut with the scene missing suffers from a jerky, primitive transition; in later versions, music added to help the transition comes off as awkward. Plus, it was the director’s wish, one which was openly flouted by boorish, money-hungry executives.

On YouTube you can find numerous fan Laserdisc transfers (like the fairly pristine one above) and pasted-together versions of the middle section of the film, indicating that this scene is important to many Muppets buffs. But to this day, Disney has not relented and made a proper uncut, high-definition transfer of The Muppet Christmas Carol available commercially. It’s an embarrassing move, unbecoming for Disney and as cynical as a pre-woke Scrooge.