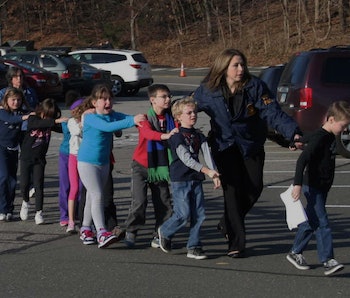 My 9-year-old son and I have this thing we do after school where I ask him three fun things he did that day. Three is the magic number, because invariably, the first two answers are automatically “lunch and recess,” while the third — normally after a little reflection and contemplation — gives me a little insight into how he spends the seven or so hours he’s at school.

Sometimes it’s a funny conversation with a friend, a field trip, or an assembly (the Reptile Man bringing in live turtles was a big hit). Rarely number three will be some silly bit of random trivia he learned; a random factoid combined with 9-year-old humor that turns a lesson on the Earth’s Hydrologic Cycle into “Today I learned the water you’re drinking probably used to be dinosaur pee!”

A couple of months ago, we played our little “fun things” game, and sure enough, lunch and recess claimed the two top spots. And there was no hesitation on number three:

“Oh! We got to do a lock-down drill today! It was awesome! We had to be still and quiet and wait for the bad guys leave. I was super stealthy so I got a piece of candy!”

Monday, December 14th marks the third anniversary of the day when a monster named Adam Lanza walked into Sandy Hook Elementary School and killed 20 children and six adult staff members in cold blood. I will never forget sitting in the office glued to the TV watching with horror as the events in Newton unfolded. At that point, the nation as a whole was certainly no stranger to school shootings: it had been a decade and a half since Jonesboro, Columbine, and Springfield.

This isn’t to minimize any of the terrible student-on-student shootings, but Sandy Hook felt like an entirely new beast. These weren’t petulant schoolkids with easy access to guns enacting their own sick Basketball Diaries-style revenge fantasies against classmates. This was a grown ass adult man — mental issues be damned — who planned to go shoot up an elementary school. His targets were specifically children, little kids all of 6 and 7-years-old.

Many will argue that three years later, nothing has changed. Was Lanza a troubled lone wolf? A terroristic gun hoarder? Was he suffering from a mental health crisis or somehow radicalized by NRA-backed “gun culture” manifested through violent video games, movies, and music? Was the problem easy access to guns or the fact that there weren’t any of the proverbial “good guys with guns” around the elementary school? Suppose for a moment that the answer is “yes” to all of the above. Aside from “thoughts and prayers” and tiresomely repeated calls to “have a national conversation,” what has really changed? Americans appear to Google “gun control” more than after mass shootings in the past. Hey, it’s a start.

Others would argue that even though the shootings are occurring more frequently, rationally, it’s very unlikely that our child’s school will ever have to worry about a shooter situation. According to Everytown For Gun Safety, a gun-safety advocacy group, there have been 161 school shootings since the horrific events in Newton. Of course, it should be pointed out that Everytown’s count involves every time a gun went off on an elementary, middle, high-school, or college campus.

If we parse those numbers to only elementary and middle schools, there have been 36 occasions since 2013 where firearms have been discharged. Four of those are defined as “gun fired unintentionally resulting in injury or death,” and four as “attempted or completed suicide, with no intent to injure another person.” Ten fall into the “gun fired but no one injured” category (it is not specified whether those discharges are intentional or not), which leaves 18 times where a shooter has actively gone on to an elementary or middle school campus and discharged a firearm to intentionally cause injury or death.

Even using Everytown’s 161 number, our schools are pretty safe in terms of percentage: there are just shy of 100,000 public schools in the United States, meaning there is about a 0.1 percent chance that your child’s school had a discharged firearm incident in the past three or so years. And polls show that parents’ level of fear about their children in school is indeed steadily returning to pre-Sandy Hook levels.

Again, that’s fair. The immediacy of the horror has faded, and we’re returning to a place of understanding threats with some mathematical rationality. Yet if you’re a parent or teacher, you know that while Sandy Hook seemed to change nothing, it, more than any other shooting, changed everything.

These aren’t the big changes that get played out on cable news, or that politicians can lob at each other like grenades. They are the kind of small, almost imperceptible changes that happen several times a day and normally in the blink of an eye: a welcome-home-from-school hug that lasts a second or two longer, spending a little extra time scanning for familiar faces and making note of those we don’t recognize, and the exchanges of relief between fellow parents, knowing that everyone made it safely through another day.

Parents and educators have always shared a contract. We send our kids — the most important little beings in our lives — to school with the expectation that they will learn and return home safely. Before Sandy Hook, we appraised teachers on whether our kids were learning long division, the circulatory system, and the Revolutionary War. Three years after Sandy Hook, these evaluations now include whether they are properly preparing our youngsters to hide from would-be shooters. Are my son’s teachers the kind of people I can trust to keep our kids away from gunfire? Would a teacher take a bullet for him? It makes us much more critical of bad teachers, and a hell of a lot more grateful for the good ones.

They are changes so subtle, that after all the irrational fears leave us and reason begins to set back in, we tend to forget what life was like before a maniac with a small arsenal barged into a Connecticut grade school and started shooting. Before we watched in horror as the 20 little victims and their six teachers were identified. Before we as a nation mourned with 26 families we’d never meet, like their losses were ours.

Sitting there in the car, my boy’s answer hit me like a brick. This wasn’t his first time to participate in a lockdown drill; the Portland school district, like thousands of cities across the nation, had mandated them in 2013. It wasn’t his glee in learning how to identify potential “lines of sights” and how each of them was assigned a “safe spot” away from every door and window, like it was some live-action video game that all of his little friends got to play at once.

It was the realization of how deeply things have changed. Of how easy it was, for both the boy and I, to accept that going to school to learn how not to get shot had become the new normal.

More like this
Innovation
7.29.2022 2:00 PM
Amazon's new invention could let you “speak” to the dead — but should it?
By Sofia Quaglia
Innovation
7.23.2022 1:30 PM
50 years ago, a powerful satellite overcame opposition and changed how we understand Earth forever
By Allie Hutchison
Entertainment
8.6.2022 3:00 PM
'Nope' editor Nick Monsour reveals the secrets behind Jordan Peele’s sci-fi monster
By Jeff Spry
Share: