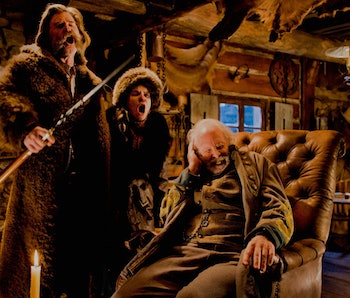 Right now, Quentin Tarantino’s newest film, The Hateful Eight, is being screened for critics. A few Inverse staffers aren’t exactly all in on the new film — first off, it’s three hours long?! Here are our ten picks for movies better than The Hateful Eight, which we have not seen.

Corban Goble: You could watch the ten-years-too-late Dana Carvey vehicle three times before you could watch The Hateful Eight once. Tur-tle!!!

Winston Cook-Wilson: QT could learn a thing or two just checking out the drama director Joel Schumacher (Batman and Robin, The Number 23) can build in just 81 action-packed minutes. Think of what Schumacher could have done in twice that time, Quent — oh wait, he would have never done it, because his head isn’t stuck up his own ass.

CG: This pick is sick as hell.

WCW: You think you’re better than Akira Kurosawa? He could also make 16 zillion hour movies that are way sicker than yours (with way more iconic sword fights), but a movie less than an hour-and-a-half long is his best movie, dog! Translation: You’re a wannabe, Quent!

WCW: You wouldn’t even know what to do with a kid, T. 81, right on the nose, and there are probably thousands of kids watching this movie as we speak, just loving it harder than you’ve ever loved anything.

WCW: Frank Langella and a post-Bicentennial Man robot getting deeper into the human condition than one of your cute little tribute films has ever gotten, my man. Does it hurt? Roll out the red carpet for that big fat 89.

CG: Tarantino is well known for his musical montages, but did he ever make one as memorable as “We Genie”?

WCW: Interesting, Q, you made a 8-hour shoot ‘em up, and Luis Buñuel evoked the Christ-like suffering of a saint in the 400 in a little less than the duration of an X-Files episode.

CG: He’ll never do it again, but Res Dogs is a minute short of 100 minutes in duration.

CG: Hamburger phone! That one song that became popular! Juno had it all in 96 minutes.

1. The League of Extraordinary Gentlemen, 110 min

CG: Q, I gotta borrow Connery’s line here and just say that, with your next effort, we’re waiting to be impressed.