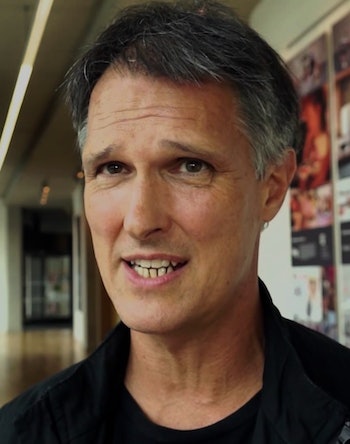 For the last 35 years, legendary artist Iain McCaig’s gorgeous work has helped shape the look of multiple universes. He gave Star Wars an edge, Harry Potter some soul, The Avengers a sense of purpose, and Guardians of the Galaxy some muscle. We caught up with him to talk process.

You’ve spent a big part of your career at Lucasfilm, creating some of the most iconic characters and costumes of the last few decades, including Darth Maul and Queen Amidala. What’s it like seeing a design you’ve put down on paper fully realized on the big screen and a part of the cultural landscape?

Actually, I’ve been working as an artist for over 35 years now, only or 10 of which were for Lucasfilm. I originally started in Animation on Sesame Street cartoons, then began my on-going life as an Illustrator (which continues to this day). I got into film 25 years ago via Industrial Light and Magic, but moved on shortly after to JAK Films (George Lucas’ personal Art Department up at Skywalker Ranch). In between working on George’s new Star Wars films, I freelanced for many other directors and franchises, including Interview With the Vampire, Harry Potter and the Goblet of Fire, Francis Ford Coppola’s Dracula, and recently for Marvel’s The Avengers and Guardians of the Galaxy and Jon Favreau’s live-action The Jungle Book. I came back to Lucasfilm a couple of years ago to help out on J.J. Abrams’ Star Wars: The Force Awakens and to Art Direct a little on Warcraft, before returning to the freelance world. I’ve had a parallel 25 year career as a screenwriter, too, and recently as author as well. In between, I wander the land teaching folk how to draw and tell stories.

How does it feel to see my designs out in the world? Very much like it feels to be a father: You kind of remember having something to do with creating this remarkable thing, but now that it’s out there and has a life of its own, all you can do is sit back and watch in amazement.

See also: Darth Maul Sucks in ‘Phantom Menace’ and a Video Game Would Fix Him

If you’ll permit a brief fan geek out — could you talk about the design process for Darth Maul? For many, he’s the standout character of the prequel trilogy. What was your inspiration for that design?

Darth Maul was one of those characters that catches the wind and rises high. I can take credit for coming up with the original design, but kudos to George Lucas for inventing him in the first place, and hats-off to make-up maestro Nick Dudman for turning my stiffened black feathers into horns, which cemented the devilish icon. And of course, a standing ovation to Ray Park for his dynamic (and cheeky) performance.

As for how the design came about, all I knew about Maul originally was that he was to be the new Sith Lord, so stupidly I tried to out-helmet Darth Vader, only to discover (duh) there’s no beating Ralph McQuarrie’s original design. Finally the penny dropped and I took the helmet off and started to explore the face underneath, drawing the portraits of various colleagues and carving them into icons of evil. At which point — finally — the script turned up; alas, all it really said was: “Darth Maul, a vision from your worst nightmare.”

Fortunately, at the time I was haunted by a nightmare of a dead-white face with metal teeth pressed against my rain-spattered studio window. I drew a stylized version of that and presented it to George at our next meeting. George shuddered and passed it back to me; “Give me your second worst nightmare” he said. And that’s when the second penny dropped: my nightmarish peeping tom didn’t fit because he was too “real,” and Star Wars, as everyone knows, is mythology. (Oh yes it is. When does it take place? “A long long time ago …”). So I reached inside for my worst mythological nightmare, which is clowns (a bad experience at age three with a Bozo the Clown billboard. Don’t ask). As I’d run out of colleague’s faces by then, I used my own, adding black marks to echo the muscle patterns underneath the flesh and turning his skin red because in nature black and red mean “Don’t Fuck With Me.” And voila — a new Sith Lord was born!

When you’re first briefed on a project, what’s your artistic process look like when you’re trying to get to the core essence of a design? Do you have a tried and true method that you stick to or is it different with every project?

First and foremost, any design — whether it’s a character or a creature or an environment — is there to serve the STORY. So I take my lead from the words — or, as happens more and more these days — from a treatment or even just a verbal pitch (and in lieu of that, from stories that I make up to fill the void). After that, I go through a very tried and true three-step process:

Step One: draw the image from you imagination, trying to capture all the pzazz and power you can;

Step Two: if there was anything in the image that lacks authority, find it in real life and study it in as many drawings as it takes to sock it away into your memory; then,

Step Three: combine Step One and Step Two into a Third drawing, one that combines the power of your imagination with the precision of your studies. Then hide Steps One and Two so everyone thinks you’re a frickin’ genius.

I’m not a fan of ranking experiences — the honor of drawing and writing and telling stories for a living is pretty amazing, no matter what it is. Working with George [Lucas] on Star Wars: Episode I was a very special experience because he gave us four or five years to design everything — an almost unheard of amount of time for a live-action art department — and because George has great respect for artists and a wealth of knowledge of art and illustration. Working with Jon Favreau on his live-action Jungle Book was a treat too — Jungle Book is the first film I ever saw in the movie theatre, and Jon is always a pleasure. And then there was Francis Ford Coppola … I could go on, but basically, it’s all been pretty fun, both inside and outside the Studio system.

In addition to being an art director, concept artist and illustrator, you’re also an author, producer and director. Do you find that these pursuits influence the others? Do you find yourself putting on, say, your “director” hat or your “producer” hat while you’re tackling a concept design project?

Art Directing, Concept Art, Illustrating, Writing, Producing, Directing … they’re all parts that collaborate to tell a story, just as brushes and paint and canvas and so on combine to make a picture. I like the Writer/Artist part best — it’s the closest to standing up and telling the tale around the fire (which I’m fond of, too). As for putting on a Producer hat when Concept Designing — if you mean, do I ever design to the budget? — the answer is no, and yes: I believe in designing for the needs of the Story first, then figuring out how the heck to pull it off without losing your vision or your shirt.

What techniques or advice could you share with artists looking to keep their skills sharp?

Don’t just hand your talents over to someone else to direct! Keep a sketchbook and work on your own projects, whether those are illustrated books or movies or graphic novels or games or art books or whatever — do your own thing, so you never lose contact with who you are and how you see things, which is the one true unique thing you have to offer the world.

What artists currently working in the industry do you look up to?

I respect and admire so many artists in the Entertainment Industry, and just as many outside it too. But “look up to” implies a kind of ranking system, and I don’t do that. A long long time ago, I used to worship Frank Frazetta, James Bama, and Norman Rockwell and always had their images plastered to my drawing board. Then one day, I put them all away, because I realized the real inspiration wasn’t in their pictures — it was in the weird wide wondrous world around me. All the amazing things I see in my colleagues’ work are just reflections of real life too, and I celebrate every time I see it.

Last question — in the perfect world, what’s your dream project?

This article by Victor Fuste originally appeared on Zerply, the platform for finding creative production talent.